‘Dig in’ to Scripture 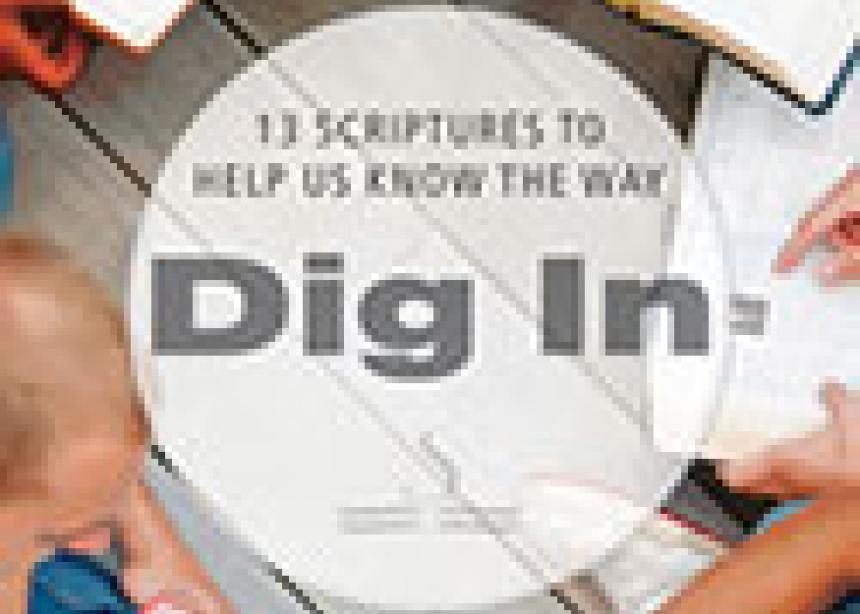 If all the texts in the Bible are important, how do we decide which texts are the most important, the ones that deserve our utmost attention, discernment or devotion?

Mennonite Church Canada is engaged in a process called “Being a Faithful Church,” designed to help congregations study and discern Scripture for today’s world. It examines both helpful and unhelpful ways Christians interpret the Bible.

To help congregations during these study periods, MennoMedia is producing a resource named “Dig In: Thirteen Scriptures to Help Us Know the Way.” This new 13-session print and video curriculum focuses on 13 core Scriptures for Anabaptist Mennonites.

The project grew out of MennoMedia staff brainstorming to create a new resource to build on the biblical emphasis of the denominations. The concept was pitched to Dave Bergen, MC Canada’s executive minister for formation, and Terry Shue, director of leadership development at MC U.S.A., for their input. MennoMedia staffers Amy Gingerich and Byron Rempel-Burkholder collaborated with Bergen and Shue to discern 13 core biblical passages that have been important to Mennonites.

“Coming up with 13 core scriptures was no easy task,” says Gingerich. “There are far more texts that we could have included. We are trying to suggest some of the core texts that shape us as a people who read and interpret the Bible with a certain lens.”

Once the texts were chosen, the planning team of Bergen, Shue, Gingerich and Rempel-Burkholder worked to identify people from churches all over the U.S. and Canada who could share their perspectives on one of the texts. The 26 interviewees—two per session— submitted videos of themselves answering a series of questions about how they experience and interpret the Bible passage in their own context.

“ ‘Dig In’ is a bit different from many Bible study curriculums, in that it focuses on storytelling and prayerful reflection as an essential part of our use of Scripture,” notes Rempel-Burkholder. “As we hear the voices of brothers and sisters around the continent and the stories of our fellow group members, we exercise the Anabaptist value of community discernment of the Word.”

In each session, after a group reading of the text, a five-minute video of interview clips opens a time of sharing in which group members are invited to reflect on how the text impacts their lives. While the participant guide provides some good Bible background material written by longtime Bible teacher Leonard Beechy, the discussion and sharing are more personal and experiential than scholarly. Similarly, both the Bible-reading activities and the closing prayer try to give room for personal responses from the heart.

“In a time when the church wrestles with many potentially divisive challenges, I am inspired when I think of the immensely positive influence of getting immersed, together, in this collection of key texts that so profoundly form our spiritual and community identity,” Bergen says of the series.