Confessions of an editor 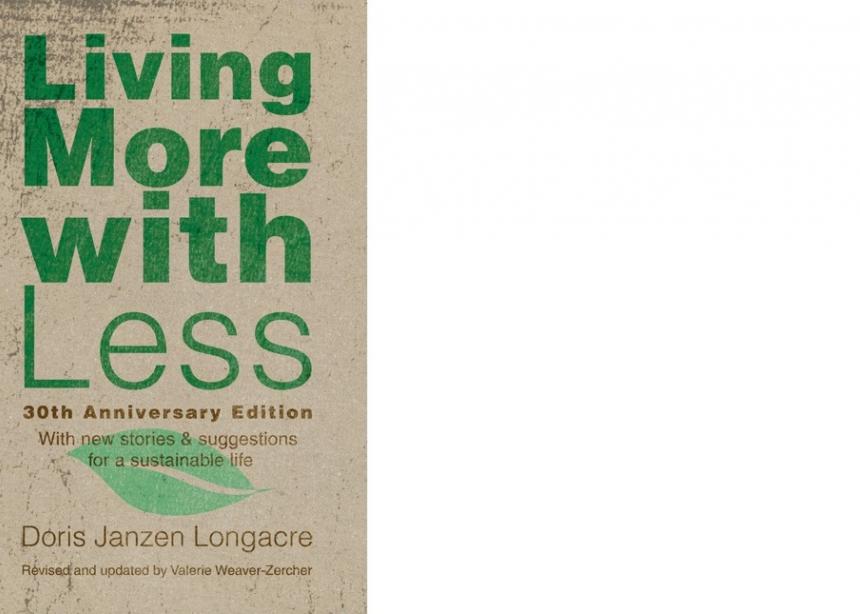 “What I didn’t expect was the sense I suddenly had that author Doris Janzen Longacre and the contributors to Living More With Less were peering around the shelves at Target, watching me finger those plush crimson towels I really didn’t need. . . .”

Editing a book about living simply has a way of throwing one’s own hypocrisy into stark relief. When I began work on the 30th-anniversary edition of Living More With Less for Herald Press, I knew that I’d have to face the many ways that I failed to make choices that were mindful of global poverty and climate change.

What I didn’t expect was the sense I suddenly had that author Doris Janzen Longacre and the contributors to Living More With Less were peering around the shelves at Target, watching me finger those plush crimson towels I really didn’t need, and glowering at me at the grocery store when I furtively bought apples from Chile or packets of instant oatmeal shot through with sugar.

But you can only read so many submissions from hundreds of folks committed to living simply before you have to acknowledge the yawning rift between your own ideals and practice. As Brian McLaren writes in the afterword of the new edition, “There’s always another light to be turned off, another degree of heating or cooling to be sacrificed, another dessert or drive to be foregone.”

For although I had already tried to mould my household in more-with-less directions, I was increasingly perplexed by the countless changes we hadn’t yet made. The more-with-less crowd felt like some elite club of what Leonard Dow calls, in his chapter in the new edition, “radical rock stars”: people of privilege who choose to live with less—and then get a lot of attention for doing so.

When green equals cool
And Dow is right. In an era in which sustainability has become trendy, both for economic and environmental reasons, people who choose to live with less may become, unwittingly, the centre of attention. No one needs to be told how cool it is to be green these days, and Lauren Weber, author of the new book, In Cheap We Trust, adds that, thanks to a tanking economy, “cheap is the new green.”

So while they might not have known it, the contributors to the 1980 volume of Living More With Less were at the forefront of a shift in culture. Many of them were convinced of something a few decades before most people in Canada and the U.S.: that we can’t burn through resources, money, forests and fuel without consequences. In fact, one of the funnier aspects of this convergence occurs when celebrities like Cindy Crawford and Ted Danson start sounding like 1970s Mennonites. “We are meant to be stewards of this time that we’re here,” Danson told a reporter recently.

As an antidote to a fashionable version of Living More With Less, Dow suggests we listen to the stories of the working poor who have been making do with less for a long time, instead of only to the stories of the privileged who choose less. While celebrity endorsements of ecological responsibility can be a good thing, listening to the poor is something that the fashionably green frugality has yet to learn.

Always raising the bar
But whether I focused on the stories of the poor who make do with less, or the privleged who choose less, it still felt like a club to which I couldn’t belong unless I gave up a lot more privilege, a lot more stuff, and maybe even my dreams of doing more with my days than hanging up laundry and freezing corn. I wondered whether I had it in me to go any farther towards the always-rising bar of green, frugal living. And I wondered, as a woman with vocational aspirations other than household management, which is where the nitty-gritty decisions about thrift and creation care are often made, whether I even wanted to.

The “great cloud of witnesses” created by Longacre and the contributors to her books started to feel a tad suffocating. I went through enough self-reflection to merit a trophy from a therapist, and at times considered writing off the whole book as a slightly addled exercise in unhealthy asceticism.

But here’s the thing: Somewhere along the way, as stories and tips for the book continued streaming in, I began to realize that inconsistency isn’t the same thing as hypocrisy, and that sometimes God’s grace appears just when you need it. Somewhere along the way, the dour judgmental expressions that my imagination had placed on the faces of Longacre and her peers changed to looks of encouragement, understanding and compassion. Somewhere along the way, I began to feel energized by their ideas and grateful for their witness. And I began to take a few more teensy steps towards the kind of more-with-less living to which they were calling me—not out of guilt or peer pressure, but out of desire.

Testimony meeting
I’m not sure how this happened, but I’m grateful that it did. I think it had something to do with the spirit in which the contributors wrote their entries. They offer their stories—of biking to the grocery store, celebrating Christmas without gifts, using fireless cookers and starting a church garden—not to shame me or pressure me, but to share the joy that such actions have brought them. They want to tell me about the first word in the phrase “more with less,” not just the second.

And eventually I realized that their testimonies are just that. Living More With Less is a kind of testimony meeting, Longacre wrote in her introduction to the 1980 edition, and she reminded her readers what a testimony meeting actually does: “Such a meeting does not report how God always acts or how people always respond,” she wrote. “It never assumes common experience—otherwise there would be no point at all in holding it. A testimony meeting expects that God gives unique skills and experiences to people and communities, and that sharing stories will strengthen everyone who hears. A testimony meeting believes in ‘many gifts, one Spirit.’ ”

From ambivilence to grace
My shift from a defensive read of contributions by Longacre and her peers to an open read was subtle, and it took time. Readers of the 30th-anniversary edition might find themselves similarly conflicted as they read the pages of this book. But, as with Scripture or a good friend’s advice, sometimes the things that make us the most uncomfortable are just what we need to hear. And sometimes our discomfort gets transformed, or at least tinted, by grace.

I still worry about what the contributors to the new edition would think if they knew that their editor still doesn’t have a rain barrel and that she sometimes feeds her kids hot dogs. But just as I’m learning grace with myself and others, I think most of the contributors have walked this journey as well. They know the ways that they, too, fail to live up to their more-with-less ideals, and the way that God loves them just the same. And they’re humbler and happier for living in what Longacre called the “holy frustration” of more-with-less life.

Indeed, humility and happiness can’t be underestimated. “ ‘Humility’ is a word that must characterize our relationship to the coming world,” writes Sheri Hostetler in the new edition. “ ‘Humility’ means knowing our place in relationship to the Creator and creation. It also comes from the same root as the word ‘humus,’ the rich organic matter from which healthy plant life emerges, and ‘humour.’ ” We will need all three, Hostetler writes—humility, humus and humour—to face the challenges of a stressed world in the years ahead.

And many of us will need humility, humus and humour tomorrow, too, when we are faced with decisions about towels and apples and oatmeal. Longacre and the contributors to Living More With Less won’t be doing surveillance of our shopping and living habits, as I once imagined. But they will be rooting for us, hoping we can find more by taking less.

Valerie Weaver-Zercher is editor of the 30th-anniversary edition of Living More With Less, published by Herald Press. She lives and works in Mechanicsburg, Pa.

“What I didn’t expect was the sense I suddenly had that author Doris Janzen Longacre and the contributors to Living More With Less were peering around the shelves at Target, watching me finger those plush crimson towels I really didn’t need. . . .”