From computers to cash

In his first year working in information technology (IT) in 1996, Nolan Andres was living at Conrad Grebel University College and his roommate was Tim Miller Dyck, later to become editor of Canadian Mennonite and now an owner-employee at PeaceWorks Technology Solutions of Waterloo, Ont., that Andres founded.

Andres thinks that in that first year they had less than 25 invoices and around $4,500 in billing. He did much of the work alone, but even then was drawing in other people to the work. An experience with a Guatemalan man moved him to continue the development of a business which did IT work for churches, not-for-profit organizations and small family businesses, providing the service in an affordable and collaborative manner.

Fast forward to late 2012. Andres had helped PeaceWorks develop a board structure and had made himself, as founder and CEO, responsible to that board. He felt that the company was on good footing, with more than 30 employees, many of whom are now co-owners of the company.

Although it had been a couple of years in coming, Andres resigned as PeaceWorks’ CEO and in early 2013 moved to the Mennonite and Savings Credit Union as its chief information officer.

In his comments to PeaceWorks’ staff and clients at a Feb. 20 fête to honour him, Andres noted that he believes the shared values and mutual interdependence of the employees will continue the vision of providing affordable IT to organizations that are striving to make a difference in the lives of people around the world. He held up TTV as an example of a PeaceWorks’ client that affects more than 60,000 people through its fair-price purchase of goods to sell in stores across North America. 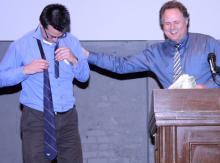 Nolan Andres, left, puts on a Conrad Grebel University College tie given him by Paul Penner, Grebel’s director of operations, at the Feb. 20 fête honouring Andres as he leaves PeaceWorks Technology Solutions, which he founded 17 years ago.