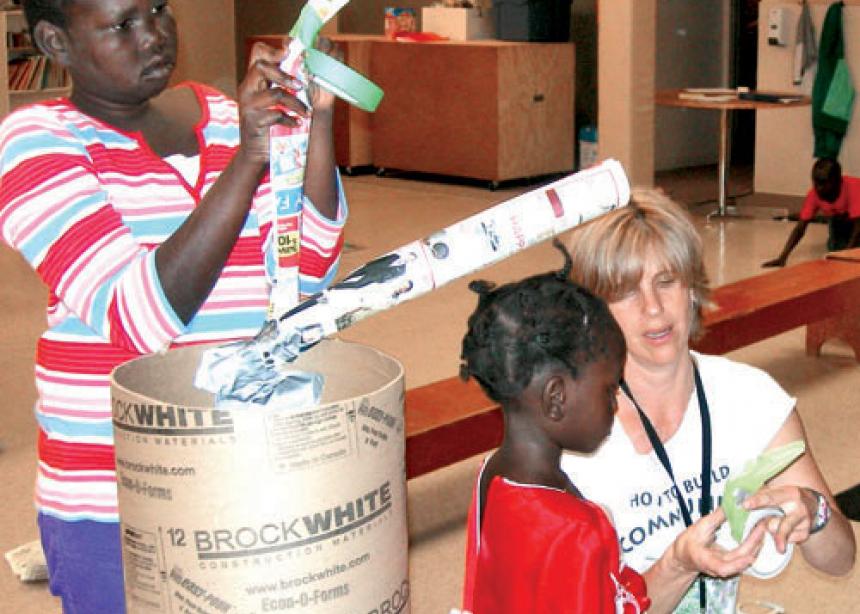 Visiting Jubilee Mennonite Church on a Thursday evening one discovers upwards of 30 neighbourhood youths excitedly milling about waiting to be shepherded into vehicles for an evening at Birds Hill Park, several young adults putting up a new basketball hoop, adults working in their garden plots, and throngs of young children playing in the yard and basement.

The young children belong to the J Club made up of three- to 12-year-olds. The theme this particular evening is trees, so with adult guidance the youngsters are planting seedlings around the church and others in the basement are making paper trees.

The place is bustling with activity and Anna Marie Geddert has it all under control. Geddert is the director of community ministry at Jubilee Mennonite, a member of both Mennonite Church Canada and the Canadian Conference of Mennonite Brethren Churches.

She started coming to the church 15 years ago as a single parent. Remarried now with a blended family of six, the church saw in her someone who could help it shape its ministry in this northeast corner of the city, where four Manitoba Housing complexes with numerous aboriginal, new immigrant and singe-parent families form part of the neighbourhood.

In April 2010, the church hired Geddert part-time for a three-month term to determine the needs in the community and connect with churches and secular organizations to find out what they are doing and where gaps existed.

“There are lots of needs and lots of women with kids,” says Geddert.

The position was then renewed for an additional six months to implement some programming. “Then after that we made a three-year commitment to hire Anna Marie for 20 hours/week,” says Pastor Dan Nighswander, who points out the butterfly garden that the J Club planted earlier in the month with help from the Living Prairie Museum. On this evening the place is clearly way too busy to lure any butterflies, but the dream is to bring nature to the churchyard.

“Many of these people do not have cars or cannot afford to go to a camp, so we would like to bring nature to them, to learn to care for it and love it,” says Geddert.

Geddert distributes a newsletter to a couple hundred households every month, informing them of upcoming activities. Often she takes time to visit as she does the mail drop.

“We are beginning to see people who identify the church as a place to come when they need someone,” says Nighswander.

It isn’t always smooth sailing, though. Things get broken and conflicts between community members erupt at times.

“Recently some kids from the J Club broke in and stole freezies and cookies from the freezer,” Nighswander says. “Some of the neighbours saw what was going on and reported it. . . . The church is seen as a place to come when they need something and people are looking out for us. . . . There is still a bit of damage that gets done, but the congregation says wear and tear on the building and vandalism is part of the cost of being who God calls us to be.”

Geddert meets regularly with community groups, churches, organizations and schools in the area; many have indicated an interest in assisting through donations, volunteers and resources. The local school shares some of their staff time with Jubilee’s community kitchen program, and stores and churches have donated sports equipment for their hockey and soccer teams.

“We’re all working at a common purpose and it’s a wonderful way to have conversations about your faith, “ says Geddert. 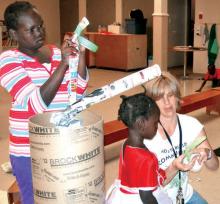