A Classic Mennonite Tale of One City

As a relative newcomer to the Canadian scene, I found Driedger’s latest book on the Mennonites in Winnipeg, his 19th, a virtual map as he traces their development in what has become the largest concentration of them in the world, surpassing Amsterdam.

While slightly on the decline since 1991 when they numbered 21,900, they still represent an unsurpassed “Mennonite metro model,” with some 40 churches, six Mennonite colleges, a media centre, scores of businesses and professional persons (including those in the legal and medical fields), not to mention an outlet for artists, musicians, politicians and creative writers, all of whom he describes in detail in the 12 chapters of his well-researched study.

Not only chronicling with fastidious detail the numbers and data in an easy-to-follow narrative, Driedger, a well-known sociologist, gives insightful interpretation to the story as it moves from the mass exodus of Mennonites in the Ukraine in 1874 to their present pervasive presence in Canada’s ninth largest city.

He is especially interested in the rural to urban shift over these 140 years and draws on peer sociological studies like Bibby and Posterski’s Teen Trends:  A Nation in Motion, for instance, to observe that “attitudes of Mennonite teens were very similar to those of other Canadian youth, with more than 80 percent supporting family relationships, changing lifestyles and religious beliefs.  Older Mennonites scored higher on ingroup identity, moral behaviour and church participation.”

As a new observer on the Canadian scene with a Swiss/German historical narrative, I found his ruminations keenly insightful on the “reurbanization” of Russian Mennonites from the Ukraine who, prior to the 1917 Revolution, had a highly-developed society which prepared them for easy assimilation into a more urban culture in Manitoba.

Driedger’s tracing of the many Mennonite groups, some anchored in migrations, others in dissention over religious differences, is even-handed and fair.  I couldn’t tell, from his writing, whether he himself is what he still calls a General Conference Mennonite, Mennonite Brethren, EMMC, EMC, Sommerfelder or Chortitzer.  Nor does he show any particular bias in what seems to be an ongoing debate over evangelism versus social justice, or missions versus service and peacemaking.

I was particularly intrigued with his chapter on creative writers whom he generally describes as “dislocated Mennonites” in search of a “home”—persons well known to us by now—Rudy Wiebe, Paul Hiebert, Arnold Dyck, Di Brandt, Miriam Toews—a list of 23 on p. 346.  He dispassionately tells their tortured stories while at the same time holding them up as prophets and seers pointing the way for a people struggling to emerge from their “boundaried traditional rural communities.”

His interpretation of their struggle to find a new “home” is especially poignant with this passage in his summary:  As Mennonites became more highly educated and urban, their search for new psychological identities changed as their language and culture changed.  Individuals studied and reevaluated loyalties, emotions and feelings toward their Anabaptist past and traditional rural values.

In the city, they were faced with new forms of space, organization, symbols and communication which required thought, debate, study and evaluation.  In Winnipeg, Mennonite creative writers, artists and musicians helped in the process of finding new Anabaptist identities, some of which reflected their 16-century roots and others which reflect the information age.(p. 368).

That observation could well apply to Mennonites everywhere in North America.  Driedger’s narrative is a classic story that should be on the library shelf of every Mennonite Church in Canada.  It is a gift to any serious Anabaptist Mennonite wanting some significant signposts for the future that are firmly rooted in the past. 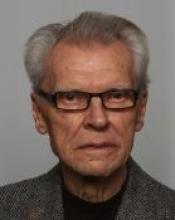 Leo Driedger is professor Emeritus of Sociology at the University of Manitoba, where he taught, researched and published for more than 40 years, and as Senior Scholar still writes today. This is his 19th book. For more than 20 years, Driedger has served on boards of the Mennonite Central Committee (MCC Manitoba, MCC Canada, MCC International).