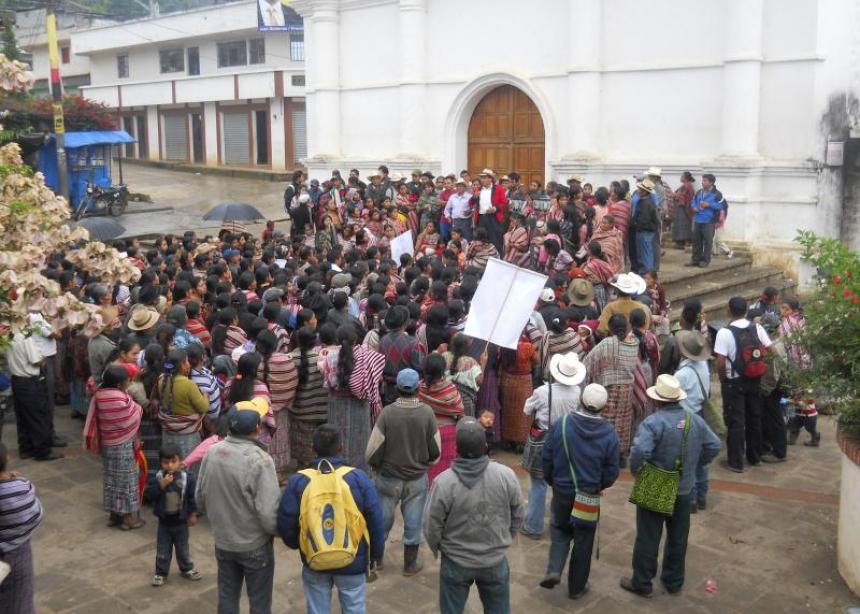 Mayan Ixhil community members protest outside the Catholic church in the town of Cotzal after ENEL representatives failed to show up for a scheduled August 2, 2011 negotiation session. Photo by Yasmin Méndez.

Tension filled the cramped, block-wall room in the Guatemalan highlands as indigenous leaders sat across from negotiators for ENEL, an Italian-based energy company building a $228-million hydro-electric dam in the area. Local Mayan Ixhil leaders hoped the presence of a renowned Catholic archbishop, a prominent Presbyterian clergyman and a Mennonite development worker from the U.S. – me – would improve their chances in the high-stakes negotiations.

Community leaders in the heavily Catholic area first invited us to be part of the talks in May 2011, when ENEL agreed to sit down with indigenous peoples on whose ancestral lands the Palo Viejo Dam is being built. Guatemalan Archbishop Alvaro Ramazzini, an internationally recognized defender of human rights, and Dr. Vitalino Similox, head of the Christian Ecumenical Council of Guatemala, helped facilitate the talks. I sat in as an international observer, having begun a Mennonite Central Committee assignment in the area with my wife Yasmin Méndezearlier in the year.

For the three of us involved in negotiations, our role was to defend the widely ignored rights of the indigenous population. Fr. Ramazzini repeatedly challenged ENEL to see beyond the logic of profit. “In this dialogue it is necessary to find a balance between the earnings of the company and the contribution of these earnings for the [indigenous] people,” he said at one point.

But still, by September, frustration was brimming. "Five hundred years ago, the Spanish came and tricked our ancestors out of what was rightly theirs with meaningless gifts and promises," indigenous spokesperson Miguel de Leon told ENEL negotiators at a September 2 meeting. "Now, the story is repeating itself as you come here and ridicule our rights and show contempt for our customs."

Local indigenous communities had asked for a 20 percent share of revenues from the Palo Viejo Dam. At the September 2 meeting, the company refused. The two sides have not met again.

Meanwhile, construction of the 84-megawatt dam, which will be the third largest in the country when it opens next March, continues.

ENEL began construction in 2008 after the Guatemalan Government approved the project. But the indigenous people of the San Juan Cotzal communities in the western highlands had not been consulted. Tensions grew as construction proceeded. Then, when indigenous people in a neighboring municipality received no benefits or reparations from the Hidro Xacbal Dam built there in 2010, the Cotzal communities decided to non-violently block the road ENEL used to access the Palo Viejo construction site.

The Guatemalan Government responded by sending hundreds of police and soldiers with tear gas and helicopters to confront the unarmed protesters. This happened on three occasions, a particularly traumatizing action given that many people in the area lived through massacres at the hands of the military during the civil war of the 1980s.

The company launched legal action against protest organizers. But later it agreed to drop the lawsuits and enter negotiations in exchange for access to the construction site. That was when the Mayan Ixhil leaders invited Fr. Ramazzini, Dr. Similox and myself into the process.

The negotiations – some of which took place in the offices of the Cotzal Catholic Diocese – marked the first time in Guatemalan history that a multi-national company had been forced to negotiate directly with communities affected by a large development in their ancestral territory.

Unfortunately, negotiations did not set the sort of precedent that local leaders had hoped for. Though Ramazzini emphasized that the purpose of the dialogue was “for both parties to win” and that his would require “a focus on justice, equality and transparency,” such an outcome proved illusive. Despite patience of the communities and the constant guidance of Ramazzini, ENEL representatives ultimately said the community's demand for a 20-percent slice of  revenues was not “reasonable.”

The communities proposed to use the funds for development projects to benefit the local population, 87 percent of whom live on less than $2 a day. “If our country supposedly needs so much energy, and they need our rivers to supply that energy, what are we going to get out of this deal,” asked elder Concepciòn Santay at the final negotiation session. “The International Labor Organization’s Convention 169, says that we should have been consulted before any of this began, and that we also have a right to benefit from the profits that the dam will create.”

“Why do you consider our demands unreasonable?” Miguel de Leon asked ENEL negotiators. “This is our land and our rivers and we are only asking for 20 percent of the profits that our rivers create. We don't ask much, but your greed makes you see our simple demands as unreasonable.”

ENEL is the largest utility in Italy and the second largest in Europe, with revenues of more than US$100 billion in 2010. It also has a broad international scope, selling electricity and natural gas to over 60 million customers in 40 countries.

Meanwhile, with the failure of the Palo Viejo negotiations, indigenous leaders of San Juan Cotzal are organizing a community referendum on hydroelectric projects in their territory. Fr. Ramazzini, Dr. Similox and the Mennonite Central Committee continue to monitor the situation.

Tobias Roberts lives in Nebaj, Guatemala where he and his wife are on assignment with the Mennonite Central Committee. He is a native of Bowling Green, Kentucky. The translation of quoted materials was done by Roberts. 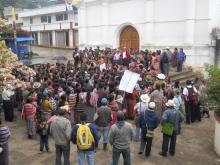 Mayan Ixhil community members protest outside the Catholic church in the town of Cotzal after ENEL representatives failed to show up for a scheduled August 2, 2011 negotiation session. Photo by Yasmin Méndez.