A Christ-figure for a new generation? 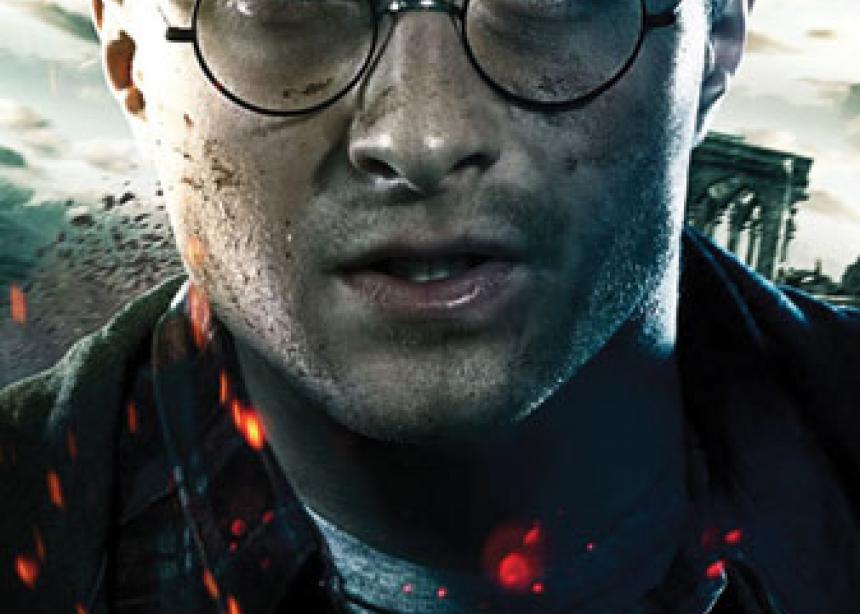 Like the first two Narnia films, DH2 focuses unnecessarily—and disturbingly—on a climactic epic battle between good and evil. Apparently, filmmakers are convinced that this is what filmgoers want to see. For that reason alone, DH2 is not, in my opinion, the best film in the series, although it is certainly one of the better ones, highlighted by the acting of a brilliant ensemble British cast. However, DH2 is clearly the most theologically profound film of the series, positioning the young master of magic as a Christ-figure.

In a discussion during one of my seminars at this summer’s Mennonite Church Canada assembly, participants argued about the use of the term “Christ-figure.” It was noted that many so-called Christ-figures bear little resemblance to Jesus, especially in their attitudes toward violence, and are often labelled as Christ-figures simply because of the manner of their death. This argument is especially pertinent to Harry Potter, where the films and books apparently do not convey the same message.

When the first Harry Potter film—Sorcerer’s Stone—was released in 2001, many Christians condemned it because of its positive portrayal of magic and witchcraft. Since the film was about children, it was feared that impressionable young viewers would develop an unhealthy interest in paganism and witchcraft.

I have seen no widespread or convincing evidence to validate this claim. In fact, a strong argument could be made that the eight Harry Potter films promote Christian values, culminating in a film which suggests that author J.K. Rowling is telling a story with a solid Christian foundation.

Throughout the series, Harry Potter is the focus of messianic expectation. His behaviour seems to be driven by an innate wisdom and “compassion for all” that is beyond his years and distinct from his peers. This is exemplified in DH2 by Harry’s willingness to risk his life to save the lives of his “enemies.” Then, near the end of the film—in a scene reminiscent of Gethsemane—Harry makes the decision to give up his life to save his friends and destroy the power of evil. When he “dies,” he finds himself at “King’s Cross” subway station, where he learns that he is protected by his mother’s blood and did not actually die.

In the film, this is not as clear as it is in the book, and Harry’s return comes across as a resurrection. What did die, however, was the part of Voldemort—the evil one—which was inside Harry and which Harry needed to kill before Voldemort could be defeated.

The final confrontation between good and evil in DH2 makes it look like Harry Potter returns to life and overpowers Voldemort. But book readers interpret Voldemort as being defeated when his killing curse bounces off Harry and returns to kill him. Apparently, the final book suggests that Harry eventually renounces violence and power as a way to overcome evil.

DH2 and the other films portray Harry as one who does not want to kill others and who uses violence only in defence, but not as one who rejects the possibility of redemptive violence. Such a rejection, combined with his love and compassion, his passion for justice and his willingness to die to save the world, would package the protagonist into a true, albeit fictional, Christ-figure.

In the end, the Harry Potter books and films provide a lot of food for theological reflection, especially for Christians who appreciate the re-telling of the gospels in a way that engages a new generation. For non-Christians, the thematic significance and parallels to Scripture may be lost without a skilled and informed believer to help out.

Among the questions I am led to ask are:

Whatever our answers, the Harry Potter films can be the subject of fruitful conversation among believers and non-believers alike.