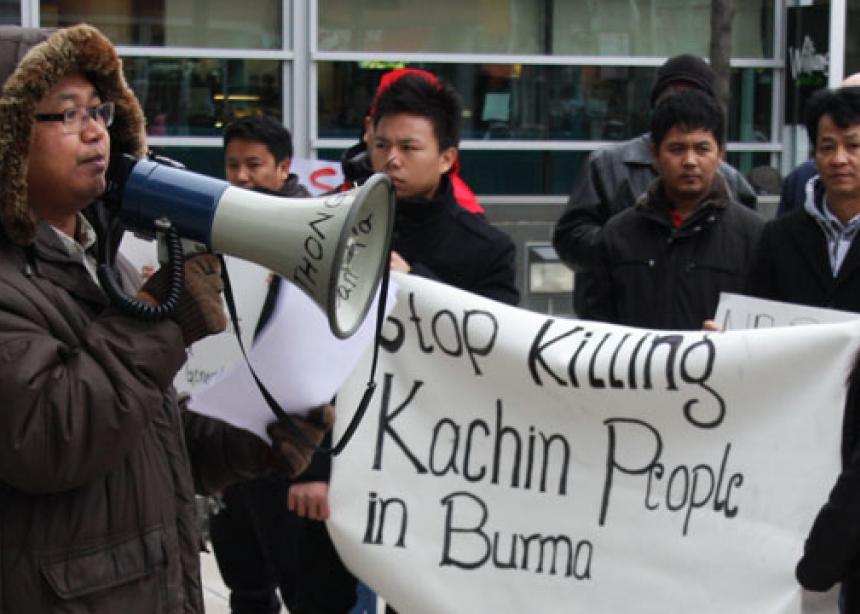 Victor Khambil of the Chin Christian Church, a Mennonite Church Eastern Canada emerging congregation, leads chants with his megaphone in support of the Kachin people of Burma.

Victor Khambil, secretary for the Chin Christian Church, Kitchener, was front and centre at a peaceful protest at city hall on Jan. 19.

An emerging congregation in Mennonite Church Eastern Canada, the Chin came out to support the Kachin in Burma (also known as Myanmar), who have been embroiled in a more-than-half-century battle for autonomy with the majority Burmese.

Khambil explains that the Kachin are the same ethnic group in Burma as the Chin, but they live in different states. Burma is overwhelmingly Buddhist, with only 4 percent Christian, but the Chin, Kachin and Karen peoples are 95 percent or more Christian. They have long been oppressed by the majority, especially as Kachin Province is rich in resources, which the majority wants to exploit. The Kachin and Burmese military had a 17-year ceasefire, which was broken by the military in 2011.

Burmese Nobel Peace Prize winner Aung San Suu Kyi, recently elected as a representative in the Burmese government, noted that, unless the government will make peace with the ethnic groups, there can be no real democracy in Burma. There are claims that, during the recent Christmas holidays, the Burmese military targeted churches filled with Christian worshippers.

The Kitchener protest was one of many rallies taking place all around the world. Because Canada recently rewarded the increase in freedom in Burma with the opening of an embassy there, the protesters called on the federal government to bring pressure to bear on the Burmese government to recognize the rights of minority peoples.

A ceasefire announced on Jan. 18 was not holding as the protesters chanted in front of the Kitchener city hall. The protest was attended by Gord Martin, executive director of Vision Ministry Canada, which supports the work of Christians in Burma, and Brian Bauman, missions minister for MC Eastern Canada, who had recently been on a teaching tour to Burma among the Chin.

Victor Khambil of the Chin Christian Church, a Mennonite Church Eastern Canada emerging congregation, leads chants with his megaphone in support of the Kachin people of Burma.