Challenging the politics of empire 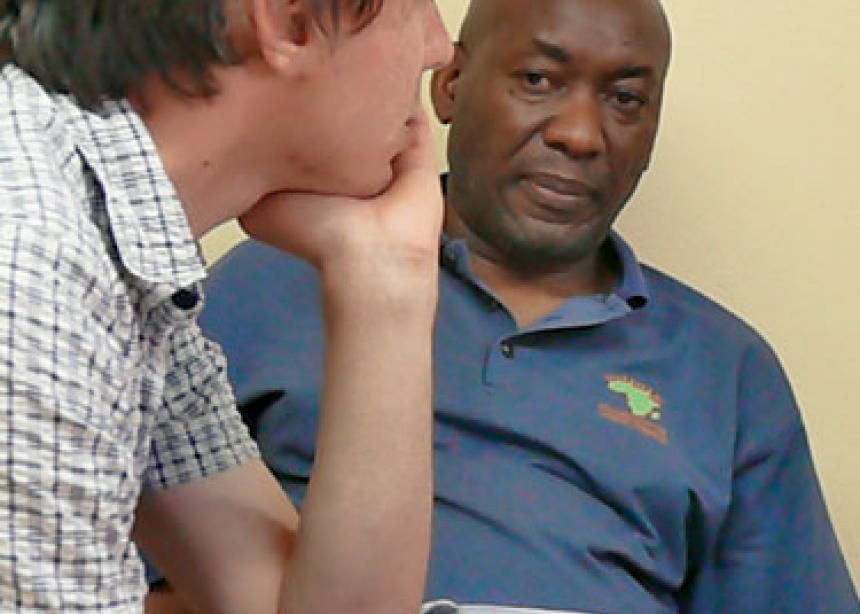 Cobus van Wyngaard, a pastor from the Dutch Reformed Church, left, and Mpho Putu, a pastor at a Vineyard church in Soweto, participate in the inaugural theological forum put on by the Anabaptist Network in South Africa. Both are members of the network’s steering committee.

As a young Christian man actively involved in the struggle against apartheid in South Africa, Mpho Putu knew that some of the movement’s protest songs included themes of revenge killing that posed challenges to what it means to be a faithful disciple of Jesus.

Today, Putu is a pastor at a Vineyard church in Soweto and was one of the presenters at the inaugural theological forum held by the Anabaptist Network in South Africa on April 30. Putu understands that Jesus, in a radical display of God’s love for humanity, challenged the empire of his day and was sucked into the vortex of its political reality. Jesus ultimately died as a political prisoner.

How Jesus’ example should be understood in light of the new globalization of empire experienced today was the main topic of discussion at the forum. The theme, “Discipleship amidst empire,” drew participants from a variety of backgrounds in the Johannesburg/Pretoria area who gathered at Mondeor Community Church to wrestle with the topic.

What does discipleship look like in the midst of today’s context, where the boundaries of nation-states have become more permeable, and sovereignty, power, and control are taking shape in new ways and under new conditions? What must disciples of Christ do in the midst of a globalized empire, where sovereignty has been up-scaled from the nation-state to the global context? How does one live as a faithful disciple of Jesus in the midst of this new reality?

Cobus van Wyngaard, a pastor from the Dutch Reformed Church, and Putu, both members of the network’s steering committee, presented their insights.

Putu observed that, while Jesus died as a political prisoner of the empire of his day, “today, . . . the church in South Africa is silent during times of injustice.” This does not reflect the model of Jesus, whose life countered the accepted political reality of the day with a higher calling, and ultimately lost his life when this higher calling was understood as a challenge to the powers of the empire, he said.

Putu, in defining “politics” as “being that which pertains to matters of the people,” noted that everyone is involved in politics. The difference is that the politics of disciples of Jesus are shaped by the identity of the one they follow. “A disciple’s identity is shaped by God,” he said. This determines how people participate in political realities, he said, reflecting on his inability to sing violent protest songs as a young man during apartheid.

Van Wyngaard offered a definition of “empire” used by Albert Nolan, author and priest in the Dominican Order: “Empire is the structure of power that makes the rich richer and the poor poorer.” Nolan chose to stay in South Africa during the apartheid era even though he was offered a post at the order’s headquarters in Rome.

Said van Wyngaard, “We regularly take notice of the obvious examples of empire, but we also need to take heed of the small demonstrations of empire as well, which often go unnoticed.”

The aim of the theological forums is to explore issues of faith that impact daily living in Southern Africa and beyond, encouraging and challenging participants to explore, embrace and embody a radical lifestyle centred around God’s reconciling vision for the world.

Andrew and Karen Suderman are Mennonite Church Canada Witness workers in South Africa. The Anabaptist Network in Southern Africa seeks to walk with, support and grow communities of peace, justice and reconciliation within South Africa. 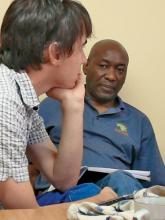 Cobus van Wyngaard, a pastor from the Dutch Reformed Church, left, and Mpho Putu, a pastor at a Vineyard church in Soweto, participate in the inaugural theological forum put on by the Anabaptist Network in South Africa. Both are members of the network’s steering committee.