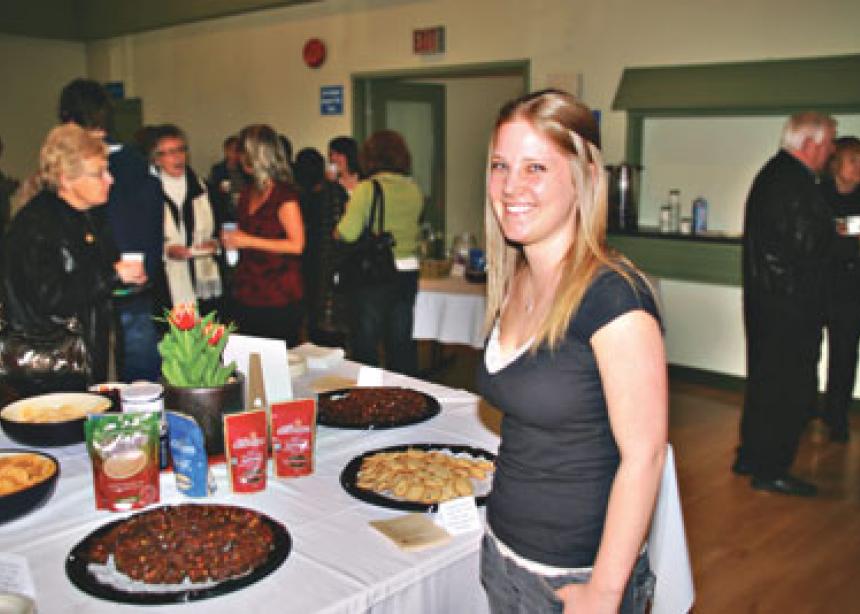 University student Melinda Goertz poses with her baking and the fair trade products she used to create them.

Indian dancers from the Swastini Dance Group led by Swati and Nidhi Juthani swirled over the stage at Victoria Park Pavilion in Kitchener on March 27. Both traditional and “Bollywood” styles were showcased to welcome Roopa Mehta from India to “Women’s stories/Women’s hope: An international celebration” of fair trade hosted by Ten Thousand Villages (TTV) and Mennonite Economic Development Associates (MEDA).

Mehta, with a master of business administration degree from Delhi University, began her business career as the chief executive officer of her family’s textile manufacturing and retailing company. Now she is the executive director of the Sasha Association for Craft Producers, part of the Sarba Shanti Ayog not-for-profit fair-trade organization.

Seventy percent of the people Sasha works with are women producers in India. Sasha’s key goals are to help their producers gain confidence and a sense of worth, mostly through helping them appreciate their own traditional handicrafts; to find markets for these products; and to shepherd the whole process from manufacture to sales.

While the men in families and villages need to be won over at first, Mehta said that eventually the new income and pride free the women to run their organizations themselves. Some of the women’s work has been shown in Italy and Edinburgh. Sasha’s products are available at Ten Thousand Villages in North America.

Both Gordon and Mehta told stories of specific women helped by the programs they were running.

Amina, an Indian woman, was doing work for male wholesalers, but the low-quality products she and others in the village were making earned them little money and little respect, Mehta said. But with Sasha’s help, they learned to have pride in their own embroidery and began to earn a decent living as well as the respect of the men in their lives.

The third component of the afternoon was food: olive oil and spices from TTV; falafel, squares and cookies made from TTV fair trade products; and fair trade coffee.

The event not only told stories of women being helped far away, but did the same at home: The sweets were made by Melinda Goertz, a third-year university student from Waterloo, Ont., who is trying to start her own business to support herself through school.

University student Melinda Goertz poses with her baking and the fair trade products she used to create them.