For God and Country (In That Order): Faith and Service for Ordinary Radicals.
By Logan Mehl-Laituri. Herald Press, 2013, 225 pages. 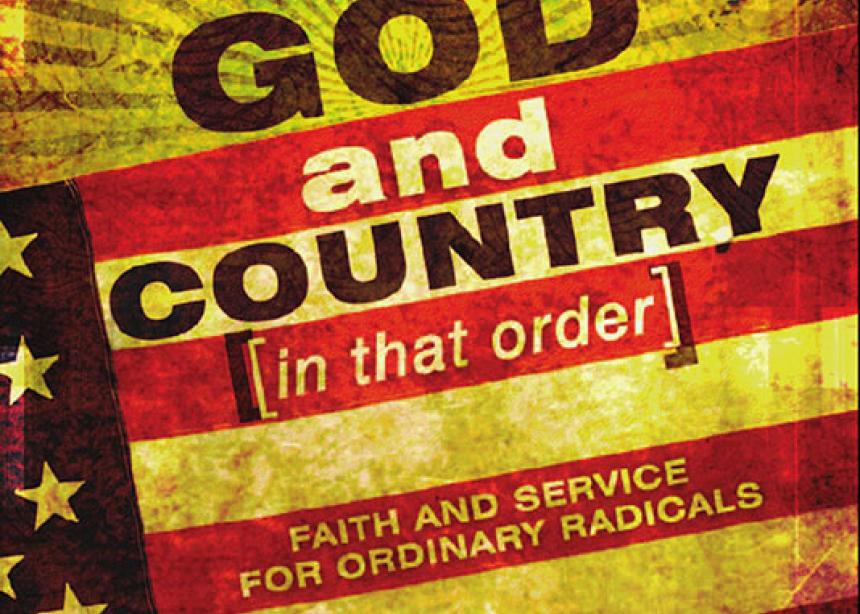 For God and Country is a bit of a surprise for a Mennonite publisher. Although non-Mennonite readers may find the questions it raises about the role of Christian soldiers thought-provoking, it does little to promote the idea that followers of Jesus should not participate in war or military service.

The author, Logan Mehl-Laituri, was serving with the U.S. military in Iraq when he applied for status as a non-combatant conscientious objector (CO) and was discharged in 2006. After serving a stint with Christian Peacemaker Teams, he began studying theology and working with veterans groups. He now speaks and writes about veterans’ issues. Given this background, perhaps it isn’t surprising that the book is careful not to be too critical of militarism and nationalism.

On his website, the author writes, “Whereas Reborn on the Fourth of July [his earlier book] was about conscientious participation with faith in mind, For God and Country . . . is more about chaplaincy and the line between church and state as it moved throughout history.”

He goes on to say that he left the military “rather reluctantly” and knows from talking to other soldiers that “the military is compelling in unanticipated ways.” Although he personally could not bring himself to end another human being’s life, he understands the appeal of the military, with its sense of adventure and danger that forces soldiers to push themselves to the limit, committing themselves to something they feel is important.

This point of view comes through loud and clear in For God and Country. It seems to be written for chaplains and soldiers who are struggling with what it means to serve God while serving in the military. It almost reads like an explanation of Just War theory. He declares that a soldier’s most difficult task comes when the values of one’s nation conflict with God’s values. He describes with respect soldiers from long ago—he calls them saints—who balanced the love of God with love of country.

The book is not difficult to read, as it is a collection of 44 short stories about Christian warriors and pacifists from ancient times to the present. It includes warriors from the Old Testament, martyrs from the early church, stories from the medieval period and modern pacifists. Scattered throughout are pull-quotes and drawings that further break up the text. Included in the appendices are a variety of resources, including creeds from the church and the military, as well as Christian statements on war from a variety of denominations.

Although the stories are very accessible for young readers, I do not think this is a good resource for Mennonite youth. It would, however, be helpful for military chaplains and soldiers struggling with what it means to serve God and follow Jesus. It would also be interesting for mature Christians who want to consider all sides of the CO debate.