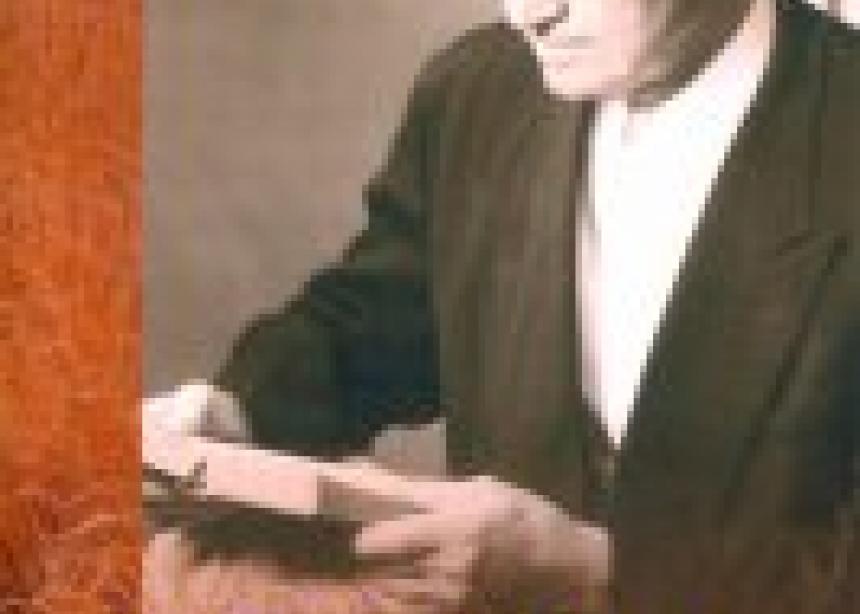 This highly detailed and comprehensive biography of Wilhelm H Falk (1892-1976), founding bishop of the Rudnerweide Mennonite conference, is an important addition to the history of Mennonites, particularly in southern Manitoba. It provides a rich account of that era with an acknowledged bias in favour of the subject—Bishop Falk.

Part of the author's declared motivation is to "set the record straight." Based on extensive research, the book does a remarkable job of outlining particularly the early history, and the origins of the Rudnerweide Gemeinde, later to become the Evangelical Mennonite Mission Church (EMMC).

Through a unique church leadership discerning process, Wilhelm Falk first became a minister in the Sommerfelder Mennonite church, an off-shoot of the General Conference, where major emphasis was placed on retaining the traditional ways as a means of preserving the essence of Mennonite faith and identity. A humble yet inquiring man, Falk, along with two fellow ministers, was influenced by local revival events.

After studying the Bible, and much prayer, he became convinced of the importance of evangelizing, creating a new balance between church traditions and church mission, and he began to support such radical activities as Sunday evening church services. This created sufficient discomfort within the Sommerfelder leadership that a formal split ensued. Falk worked hard at minimizing the associated acrimony and maintaining relationships. (This pattern has some parallels with the Mennonite Brethren split from the General Conference several decades earlier in Russia except that the Sommerfelder church base was then even more tradition-bound and conservative.)

The book proceeds to detail the difficult separation, sorting of church assets, and Falk's ongoing work of leading and growing this fledgling church conference as its Bishop. Falk had 12 (living) children as he re-married after the untimely death of his first wife. Although he received no pay and made his living from farming, he sacrificially devoted most of his energies to his role of Bishop. The responsibility caring for the spiritual needs of the whole Rudnerweide conference in Manitoba and Saskatchewan fell to him, with the assistance of his itinerant ministers.

He travelled extensively, often leaving his family to essentially fend for themselves. Major credit is given to his second wife, Elizabeth, and the older children for carrying the daily burden of farm and household management. Formal education for some of the older children was sacrificed as a result with unhappy consequences. Eventually after 27 years of dedicated sacrificial service, Falk, who believed he had been appointed bishop for life, was sidelined in a painful process which many of his family felt was unjust.

With this volume, Mary Neufeld, a daughter, has given her extended family and the affected Mennonite community a rare gift. While hers is a revisionist biography, somewhat uneven at times (it would benefit from a diligent editor), it is also a unique historical picture of the Rudnerweide/EMMC along with the Sommerfelder. It also includes General Conference, and Mennonite Brethren conferences where these intersected during that era. In many respects it is a sociological history of the Mennonites in southern Manitoba—a study of a community undergoing significant change.

We are given a fascinating picture of how church leadership is discerned and how it emerges in the absence of formal education—a process where community expectations are projected onto individuals who then accept, and are obligated by and identify with these expectations. The paradox is that as the community's beliefs change or expand, these strong leaders are unable to adapt sufficiently and end up being ousted from their leadership roles. Here we watch the power shift from a hierarchical Bishop-based church structure to a localized pastor-based structure take place.

In some respects the book is perhaps too personal in that people named or their relatives are still alive. Some of the events as described will make the reader uncomfortable and some explanations appear angry and defensive. The rudimentary but evolving state of southern Manitoba’s health care, and the story of mental illness, particularly severe depression, also threads its way through the whole narrative. Falk is identified early on as having too sensitive a nature to carry the required leadership load, but he rises to the challenge only to succumb periodically to the "dark dogs of depression."

The latter part of the book is about a beloved but aging leader put out to pasture, having outlived his organizational usefulness, but nevertheless becoming increasingly revered by members of his family. The book reflects a fierce loyalty, especially by his younger daughters, who perhaps felt twinges of guilt at not having been the "perfect children" apparently required of a bishop's family.

This book paints a fascinating picture of the ever-evolving Mennonite church community, moving through stages of traditions, language wars, urbanization and education. It offers a positive balance to other accounts where conservative Mennonite communities are viewed as oppressive and without depth and value. The back cover states that this volume is, above all else, a love story. It is indeed that—between a humble dedicated church leader and his God, between a prairie farmer and his wife, and between a devoted daughter and her father.

Definitely a worthwhile read for those familiar with that era and for those who would strive to understand the complex world of the "quiet in the land."