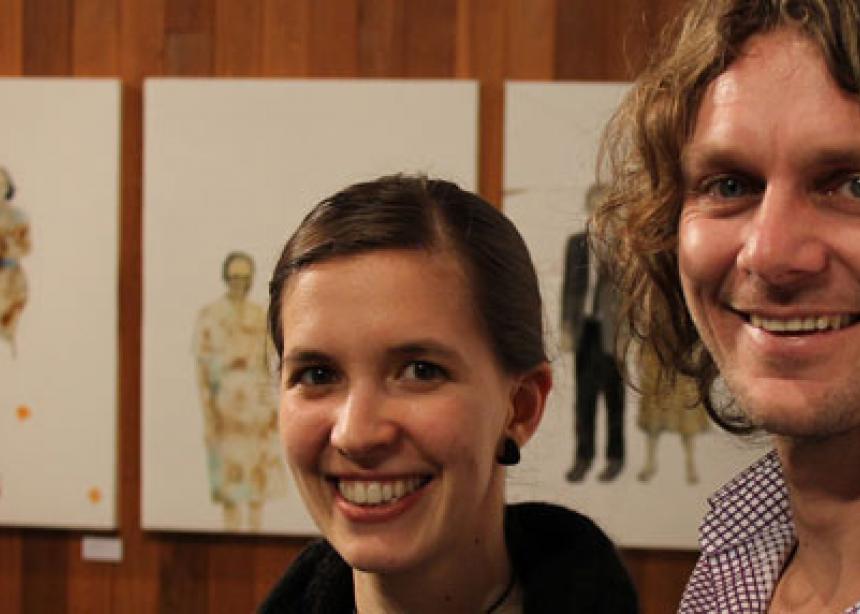 Visual artists Miriam Rudolph and Bennie Peters explore their upbringing in Paraguay in the new art exhibit, ‘From Paraguay to Winnipeg: Explorations of Place, Home and Childhood,’ at the Mennonite Heritage Centre Gallery.

Miriam Rudolph has spent most of the past decade living in Winnipeg, but Canadians often ask her what it’s like living in Paraguay, where she grew up.

“Everything is so absolutely different,” the 30-year-old artist explains. “So much of life takes place outdoors. The colours are different. Cows, bicycles and cars all share the same highway, which you don’t see here. . . . It’s such a different life. I hope I can somehow show people what Paraguay is like through my work and that they can see it through my eyes, too.”

Rudolph and Bennie Peters are the two artists included in “From Paraguay to Winnipeg,” a new exhibit on display at the Mennonite Heritage Centre Gallery until April 27. Subtitled “Explorations of Place, Home and Childhood,” the exhibit features works by the two native South Americans that reflect on their heritage.

Rudolph uses painting and printmaking for her work. Her early pieces included creating maps of Paraguay as a way to record memories from her childhood. She also created maps of Winnipeg in her art as a way to connect herself to the city, familiarize herself with new places and buildings, and as a way of finding beauty in the city.

Peters works predominantly with paint on drywall. The 32-year-old says that for the work he created specifically for “From Paraguay to Winnipeg,” he challenged himself to tell stories from his childhood growing up with his parents, four sisters and three brothers in the Sommerfeld Colony in eastern Paraguay.

“The reason I wanted to tell stories from that time is that when I see my sisters’ kids growing up now, they have such joy hearing stories, and I remember I had such joy when I was growing up and someone told me stories,” Peters explains. “I wanted to capture those stories so we would never forget them and so that we could pass them on.”

Another one of Peters’ goals was to connect with his siblings, most of who now live in Canada, and talk about what they remembered about growing up in Paraguay. “There were a lot of things that I had forgotten,” Peters says.

Ray Dirks, curator of the Mennonite Heritage Centre Gallery, says he is pleased with the exhibit. “I find it’s interesting that, coming from a place we wouldn’t know as being a place where the arts are promoted—and that could very well be our own ignorance—they express themselves about their upbringing in largely positive ways,” Dirks says. “I think it’s great that we get to see and experience things about Paraguay, and Mennonites in Paraguay, from the perspective of two artists who come from there.”

“They’re offering something beyond the stereotypes that we might have,” he adds.

The exhibit is a reunion of sorts for Rudolph and Peters, who both grew up in the same town in Paraguay before moving to Winnipeg to study fine arts at the University of Manitoba.

Rudolph recalls hanging out with Peters in high school and discussing art with him. “I think it’s partly his fault that I came to Winnipeg,” she says with a laugh. “He went to the U of M two or three years before me, and it was encouraging that someone from Paraguay with little knowledge of English could go to Winnipeg to study art. I followed in his footsteps a little bit with that.”

Peters hopes the exhibit will inspire those who see it to tell their own stories. “They should tell them because everybody loves stories,” he says. “I believe those stories have made people who they are.”

Visual artists Miriam Rudolph and Bennie Peters explore their upbringing in Paraguay in the new art exhibit, ‘From Paraguay to Winnipeg: Explorations of Place, Home and Childhood,’ at the Mennonite Heritage Centre Gallery. 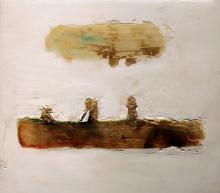 ‘Working in the Garden’ by Bennie Peters. Peters, 32, works predominantly with paint on drywall to create his work. 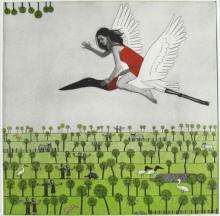 ‘Waving Goodbye’ by Miriam Rudolph. Rudolph, 30, grew up in Paraguay, lived in Winnipeg for nine years and currently resides in Minneapolis, Minn. Much of her work deals with searching for belonging.