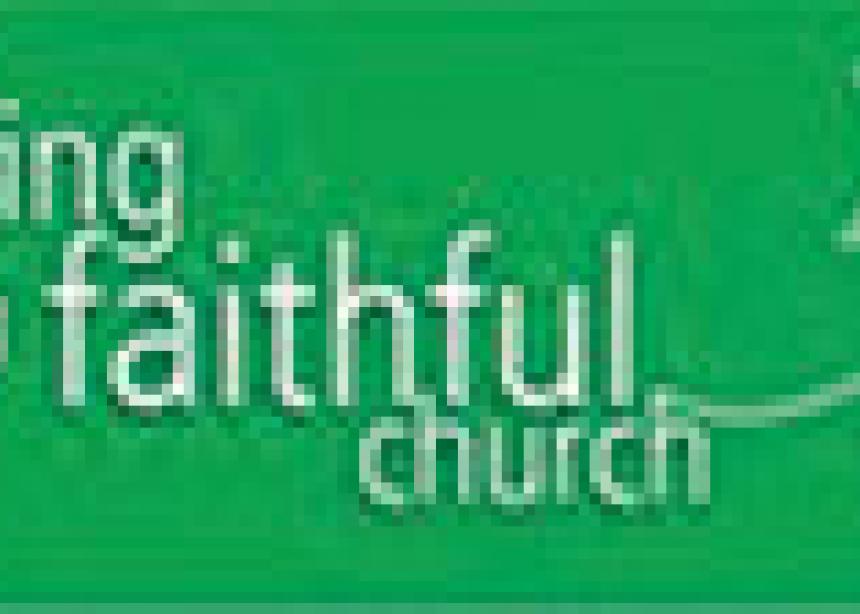 Mennonite Church Canada’s General Board offers this discernment guide in advance of Assembly 2014, to be held in Winnipeg from July 3 to 6.

The Being a Faithful Church (BFC) process is now into its fifth year of discernment and conversation. We are very pleased with the response of congregations to this significant effort. To this point (April 15), 65 percent of our 218 congregations have responded in some way. The responses have been quite evenly spread across the church, from 44 percent to 71 percent in the five area churches.

There has been very good personal contact and visits to 16 percent of the congregations where English is not their primary language. More are scheduled in the near future. Several congregations have indicated that further responses are still pending. In addition, we have received responses from individuals, a circle of scholars and various groups with special interests in the conversation.

A large majority of the responses affirm the process and support it.

It is important to note that what is reflected in this report is accurately descriptive of what we have received and heard—to the best of our ability.

To this point, we have received 82 responses to BFC 5, the highest response rates to date. This level of interest and response is quite remarkable and very encouraging.

Congregations that did not participate in the BFC 5 process have identified various reasons:

a. Lack of time in the annual schedule.

b. Transitions of leadership in the congregation.

e. The study was too similar to what they have already done in the recent past.

1. Much appreciation was expressed for the resource. Special mention was made of the link suggested between sexuality and spirituality, and the concept of living between the horizons.

2. Although there was some call for change, most responses reflected a lack of desire to change the historical understanding of sexuality as implied in the resolutions of Saskatoon (1986), Purdue (1987) and the Confession of Faith in a Mennonite Perspective (1995). At the same time, there is also an expressed desire to strengthen our compassionate embrace of persons in same-sex attraction.

3. Many respondents hesitated to declare their submission as representative of their congregations. Rather, they identified small groups, leadership groups or individuals as responsible for the feedback. This indicates that within congregations we are not of one mind.

4. There is strong recognition that the church needs to respond in a Christ-like compassionate way to persons attracted to the same sex in our society. Several reasons were identified:

i. Increasingly, our society and culture view same-sex relations as a justice issue.

ii. Same-sex marriage has been legalized in Canada.

iii. Christian concerns are often viewed as compassionless and reactionary.

iv. Our youth often find the traditional view incomprehensible and see the church as out of touch with its time.

5. Some express the concern that this discernment should not overshadow the importance of our larger missional vision and work.

6. There is evident difference in biblical interpretation as related to matters of same-sex attraction and relationships.

7. There was again strong affirmation that Scripture and the leading of the Spirit are foundational in our discernment process.

8. There is a strong rejection of immorality and promiscuity in all our relationships.

9. There is a conviction that sexual union belongs in the framework of a life-long commitment.

10. There is a need to cultivate healthy, wholesome sexuality in our culture and church.

11. There are differences in understanding the medical/scientific data/evidence available to date.

12. Some would have preferred a less academic, simplified document.

Several trends can be identified in the responses

1. In spite of congregations not being able to reach consensus, responses stated a deep desire for unity and that challenges of same-sex relations should not cause di-visions at congregational, area- or national-church levels.

2. A significant majority of responses reflect the historical affirmations as implied in the Resolution on Sexuality (1986 and 1987) or Article 19 of the Confession of Faith in a Mennonite Perspective (1995). At the same time, the responses express a desire to be more compassionate and welcoming of those individuals who are same-sex attracted.

3. A significantly smaller number of responses oppose any revisiting of the historical understanding of biblical sexuality.

4. A significantly smaller number of responses call for more inclusion of persons in same-sex relationships, including welcoming them as members, leaders and as committed same-sex partners.

Key questions and next steps

The next step in the BFC process has been to identify the specific question to be discerned regarding same-sex attractions and relationships. However, we do not see a specific question emerging from within the responses.

The responses clearly indicate that the Spirit of God has placed a deep felt desire for unity in our hearts. We yearn to be together in congregations, area churches and the national church. Is the same Spirit leading us to differing understandings of faithfulness in regards to same-sex relationships?

From the beginning of the BFC process we have prayed for the guidance of the Holy Spirit. We have invited congregations to surround their discernment in worship and prayer, and we have seen much evidence of that. The responses have revealed significant differences of understanding of the will of God, even while Scripture has been the foundation. Is the challenge for us now to see the fruit of this discernment as also being led by the Spirit of God?

We continue to hear differing understandings of faithfulness in the midst of our common yearning for unity. Do you affirm that the responses suggest the following questions as the ones to address in the next step of discernment?

i. God’s gift of unity in Christ is not invalidated by our disagreement. How shall we maintain our unity in Christ as congregations, area church/national church while understanding matters of same-sex relationships differently?

ii. Most responses indicated a desire to be “more compassionate and welcoming of those individuals who are same-sex attracted.” Describe how your congregation hopes to reflect this desire.

iii. In reviewing the trends, what counsel do you have for the area/national church in light of the different understandings of compassionate responses toward persons that are in same-sex relationships?

More about the BFC process:

Being a faithful church

Sexual inclusivity motion to be presented at national assembly

Blog: Out of practice,

For information and clarification

An affirmation of celibacy

Part 1 of a 6-part series- Being a faithful church: The paths and ditches of Biblical interpretation (Links to the other parts are there.)