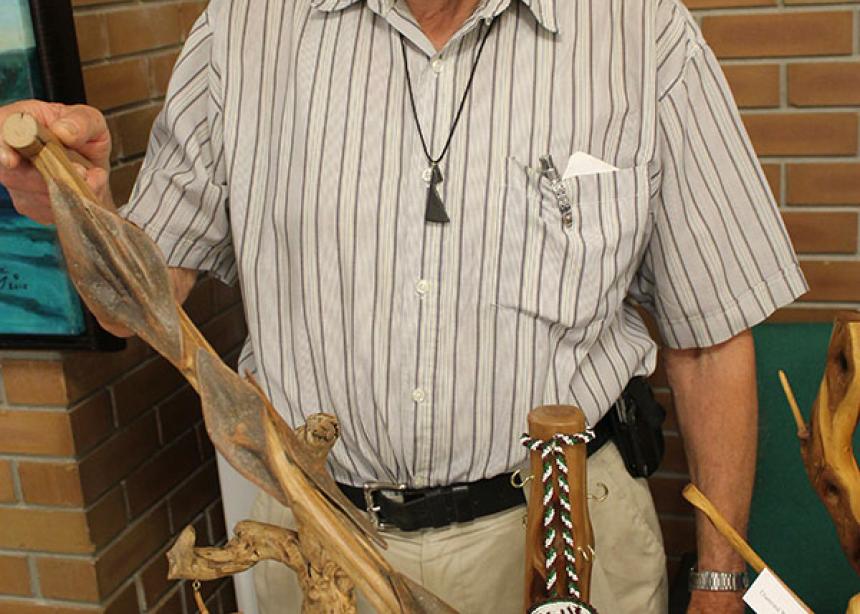 A buzz of excitement filled the common room at Bethel Place on June 5. A button collection with buttons dating as far back as the 1700s, photos over 100 years old, a beautifully polished samovar that was brought from Russia in 1923 and many other artifacts and artwork were among the items that evoked conversations and memories. The residents of this senior housing facility adjacent to Bethel Mennonite Church were hosting their first Arts, Crafts and Antiques Show.

Susan Froese, a resident for nearly four years, spearheaded the idea last winter. This project gave the residents something to distract them from the long, cold winter, she said. It also provided them with an opportunity to get to know each other in a different way. Residents were invited to contribute anything that was precious, old or handmade and to write a little explanation about it.

“At first many said they didn’t have anything but when they came down and saw some of the items to be displayed they realized they had this and that and changed their minds. But we managed to find a place for everything,” said Froese, who is over 80. “We had no idea how many people would participate or how great the interest would be. It’s been stressful but it’s also been a lot of fun.”

A walk through the show quickly dispelled any notion of inactive seniors biding their time in rocking chairs. Henry Neufeld displayed his fine woodworking craft. He has created hundreds of talking sticks carved from diamond willow along with other hand carved items. Just the week before he sold 17 talking sticks, 11 to Colombia and six to China. Not long ago one was presented to Justice Murray Sinclair, chair of the Truth and Reconciliation Commission.

Lillian Toews had a few of her recent paintings on display as well as a child’s violin that she made in 1977. Wedding gowns that spanned the decades lined one wall. Ruth Heinrichs brought both her mother’s wedding dress worn in 1911 and the one she wore in 1951.

Mildred Giesbrecht, 98 years old, was visibly excited to display several of her artifacts. Especially meaningful to her was a homemade table soccer game and wooden dice that her father had made in 1914 with which she remembers playing. Her grandfather Abram Loeppky, born in 1844, had kept a diary that was still in her possession.

For Froese, it was an opportunity to show some of her treasures as well as getting to know her community better. She lovingly stroked a red velvet tablecloth, over 100 years old, that her grandmother had brought from Russia in 1930. “They had to flee so quickly I am surprised it was saved.” She also had a little well-worn German book. “When we were refugees in Germany that Christmas in 1929, all the refugee families were given this little book with the inscription ‘from the people of Germany.’ As children we all got paper plates with nuts and candy.” The memories are vivid as people stopped and talked and asked questions about each other’s precious items.

“I came to know a lot of people better through working on this event,” said Froese.

Ruth Heinrichs displays her mother’s wedding dress worn in 1911. Hanging beside it is her own wedding dress that she wore in 1951.

Lillian Toews holds a child-size violin she made in 1977. Beside her are portraits she has painted of her granddaughter and husband.

Mildred Giesbrecht pages through the diary kept by her grandfather, Abram Loeppky, born in 1844.

Susan Froese shows the red velvet tablecloth that once belonged to her grandmother, purchased in Russia over 100 years ago.