The best coach I ever had 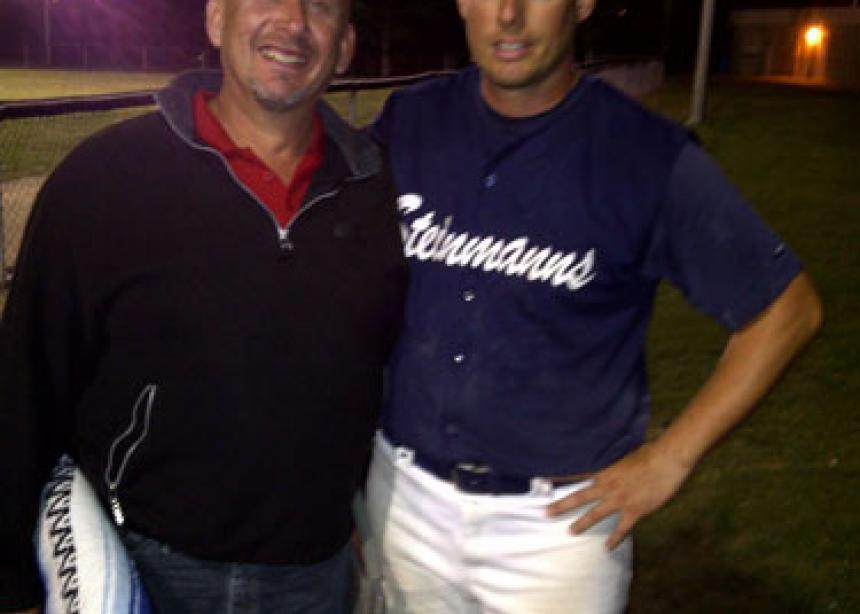 The spring after I turned 15, Sam cornered me in the hallway of Steinmann Mennonite Church and said, “You’re playing church league ball this summer.” It was more of an instruction than an invitation, and thus began my relationship with Sam Gingerich, my ball coach.

Sam was a bit of a legend in the church league fast pitch circles. He was known for his legendary rise ball and many knew about the hundreds of pitches he threw every day as he milked his cows. By this time in his life, his pitching was winding down. Although he still threw the majority of our games, he also served as our coach, setting line-ups organizing our team, and inviting some young guys to join the team.

I wasn’t much of a help to the team that first year. Although I was a competent fielder, I struggled to hit. Despite my challenges, Sam continued to encourage me and slowly my confidence grew.

Over the next few years Sam invited more young players to join our team and pretty soon this group of young players decided to strike off on our own, starting up a new team. Even though Sam was now my competitor, his willingness to mentor me didn’t stop. Needing another pitcher on our team, I decided to give this task a try. In our first game against Sam’s team, he saw me warming up and wandered over to our side of the diamond. There he proceeded to show me how to throw his famous rise ball. Now Sam didn’t go soft on us—he had a no-hitter that night—but he continued to encourage and teach, regularly showing me techniques or talking about strategy related to pitching.

Soon after this, Sam’s days as a player were over and he began umpiring for our league. Despite his new role as a neutral official, Sam was still willing to provide support to me. One year, during a playoff game, I slammed my glove down having just given up a grand slam that essentially ensured the end of our season. Sam broke from tradition, coming out from behind the plate to offer encouragement when I was definitely discouraged.

My relationship with Sam began to change after this when Sam invited my friend Dave and me to join him as coaches for his son’s minor ball team and suddenly I was working with him, mentoring a group of twelve-year-old boys. Once again I had the opportunity to witness Sam’s biggest strength as a coach as he seemed to know how to motivate and inspire each individual player. Sam allowed Dave and me to grow as coaches, regularly discussing how we were running the team and why, and giving us free rein in our offensive strategy, never getting upset when we chose a bad time to try to bunt or being too aggressive in trying to steal bases.

The way Sam worked with Timmy, a small, shy kid on that team, sticks in my mind. Timmy lacked confidence and made a joke one game about being a catcher, putting on some of the equipment. Sam quickly told Tim that he was going into the game to catch. Tim had a look of terror in his eyes, but Sam had Tim put on the equipment and practice catching as our other pitchers warmed up. By the final inning, Tim trotted out in full gear behind home plate and did a competent job as a catcher. He came back to the bench at the end of the inning with a smile from ear to ear, having accomplished something that had terrified him only an hour earlier.

The following year Sam returned to coach in our church league. A new group of teenaged guys from Steinmann were interested in starting their own team, but needed someone to lead them. Sam coached this team, which finished dead last its first year, to becoming champions, continuing to invite and encourage more and more players.

In the last few years, my relationship with Sam came full circle. As interest in fastball at our church waned, our two church teams amalgamated and twenty years after he first invited me to play ball, I once again found Sam as my coach. By this time I found that our relationship had changed. Sam still offered encouragement and the occasional piece of advice. However, as he dealt with issues on the team, he would ask me for my thoughts on what he had said or how he had handled the situation, wanting my feedback on his leadership.

Last spring Sam announced to our team that he was retiring. After 40 years as a player and coach, Sam didn’t want to be tied to a baseball schedule that forced him to run off to a ball diamond a few times each week. While disappointed, the players understood that Sam had definitely earned the right to walk away from the game. While he still regularly makes his way to the diamond to watch our games, his presence on our bench is missed.

Over 20 years I was mentored by and got to work with Sam as he coached fast pitch in our community and our church. He was a true example of how to be inclusive, encouraging, motivating, and tough when necessary, in order to build the confidence and get the most out of his players. Little did I know the impact Sam would have on me when he found me in our church hallway almost 25 years ago and informed me that I was going to play church ball. 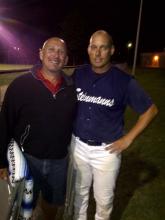