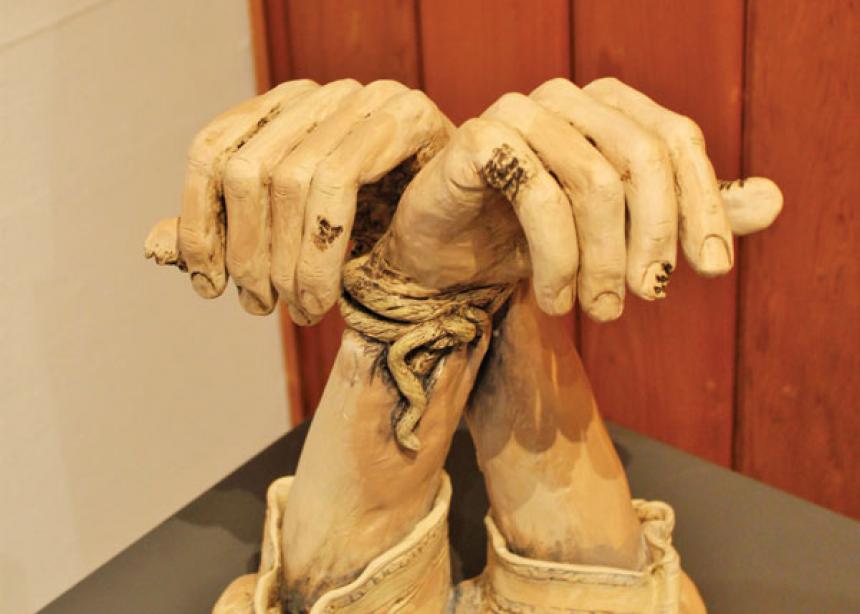 ‘6.5 Weeks’ by Cliff Derksen (clay with patina finish). The artist tried to sculpt his murdered daughter’s bound hands, but couldn’t bear to. Instead, he sculpted his own because he wishes they would have been his hands bound, instead of hers.

It is indescribable, the feeling of losing a loved one, especially when that person is lost as the result of a murder.

Cliff, Wilma and Odia Derksen have experienced this firsthand, having lost Candace, their daughter and sister, in 1985, when she was grabbed off the street, bound and left to freeze in an industrial shed in the Elmwood area of Winnipeg.

The Derksen family recently came together with Kelsie Trudeau, a student at Winnipeg’s Shaftesbury High School, whose brother Morgan was murdered in 2003, in order to put together the exhibit “Indescribable” at the Mennonite Heritage Centre Gallery, Winnipeg, which ran from Jan. 27 until March 10.

It featured art that Cliff and Odia had worked on long after Candace died and while Mark Edward Grant was being tried for first-degree murder. He was found guilty last spring, 26 years after Candace’s body was found.

The artists shared their experience with art as therapy and a way of healing on Feb. 23 at an artist talk and tour event. For the Derksens, the exhibit was a chance to steward their story, because, according to Wilma, “we are all given a story to steward.”

After their daughter was murdered, a person the Derksens call their “angel” came to their house with a similar story of loss. He told them that their future would be filled with bitterness and anger if they were to harbour vengeance against their daughter’s killer. “I’m glad we chose forgiveness,” Wilma said. “We kept away from the seductive victim-offender bond.”

“Forgiveness was something we just did,” Odia said, recalling her childhood and adolescent years. “Of course, there was anger and pain, but the element of hatred . . . we didn’t let it creep in.”

“The thing that surprised me in the 23 years after Candace’s death [until the time an arrest was made] was that we were watching TV and [Grant’s] face came on the screen,” Cliff said. “I didn’t feel rage. I realized we had been working on this. It changed my thinking more than I had expected. It was a ‘God moment.’ ”

One thing that made the time during and after Candace’s murder so difficult was that this very artistic family didn’t have an outlet for its grief.

“During the time we were traumatized by the murder, the joy of creativity wasn’t there,” Wilma said. “We sort of gave up on the art.”

Their creativity finally came out years later, when the trial began. “To see it coming out during the trial, it was providing therapy,” Wilma said. The courtroom during the trial also became a safe place for the family to go, calling it “holy ground,” because they believed that God was there.

“This changed everything for us,” Wilma said. “We weren’t walking into a place of danger, but where someone was caring for us. We slipped off our shoes at various points in the trial because God asked the people in these situations to take off their shoes because God was there.”

The art helps the Derksens feel encouraged and they hope others will be also be encouraged in knowing “that there is an amazing God who desires to walk with us in love, no matter what the circumstances,” Cliff is quoted as saying in the January 2012 issue of Canvass, the heritage centre gallery’s newsletter.

Other artists in the “Indescribable” exhibit included Steve Penner and Angela Lillico. Alexa Dirks, of the band Chic Gamine, and Ariel Posen, a well-known local musician, performed at the artist talk and tour. “Indescribable” is the second exhibit of art created by victims of violence that gallery curator Ray Dirks has displayed. 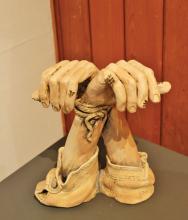 ‘6.5 Weeks’ by Cliff Derksen (clay with patina finish). The artist tried to sculpt his murdered daughter’s bound hands, but couldn’t bear to. Instead, he sculpted his own because he wishes they would have been his hands bound, instead of hers. 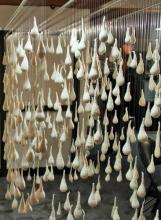 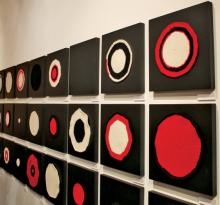 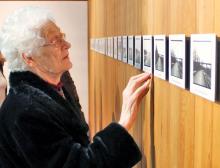 ‘The Last Walk’ by Odia Derksen (series of photographs, detail). A patron of the Mennonite Heritage Centre Gallery views the collection of photos Derksen took as she walked her murdered sister Candace’s route from school to where she was abducted and then to where her body was eventually found. 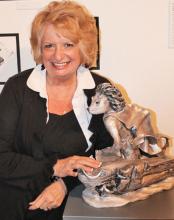 Wilma Derksen poses beside husband Cliff Derksen’s sculpture, ‘Escape: Jonah’ (clay with a patina finish). While the artist was unhappy with life, wishing to escape just like Jonah, he felt peace knowing that he has a patient, understanding and forgiving God.