The beautiful feet of those who bring good news 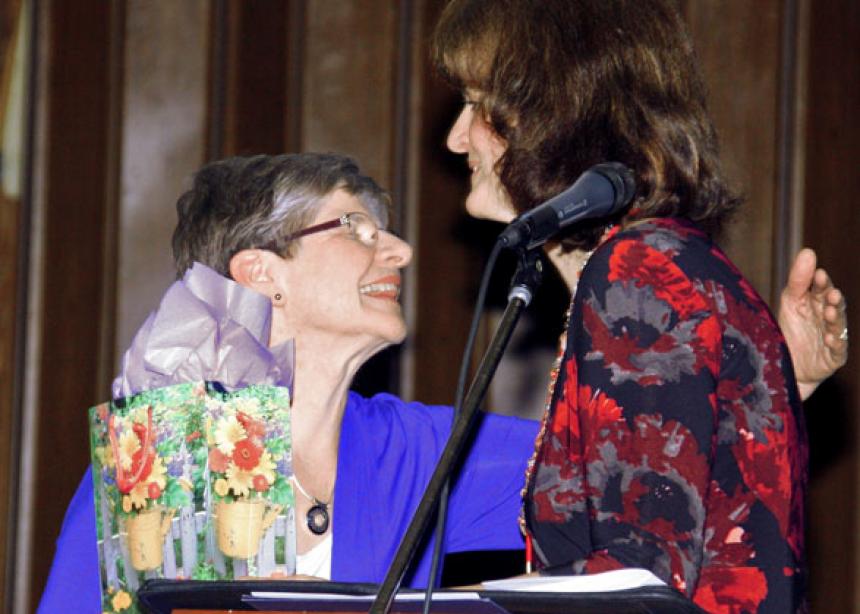 On the cusp of its 25th year, Mennonite Church Eastern Canada returned to the place it had its inaugural gathering:

On April 27, Dan Epp-Tiessen, associate professor of Bible at Canadian Mennonite University, Winnipeg, preached on the Book of Daniel, calling his sermon, “The leadership challenge: The mission of the church in a postmodern world.”

Leadership was focused on in many ways on April 28.

Muriel Bechtel, area church minister, was feted as she retires this summer. It was noted that one of her key accomplishments during her 12 years in the position was the establishment of the Transitioning into Ministry (TiM) program, a three-year initiation for new pastors, accomplished in coordination with Marianne Mellinger, coordinator of leadership formation. According to Karen Martens-Zimmerly, MC Canada denominational minister, this program, which attempts to help new pastors over the sometimes rough first few years of pastoring, is now being copied across Canada.

Emerging status is a time of testing for both the congregation and the area church as to the fit between them. To receive emerging status, a congregation must have regular meetings and a core of committed people; be in essential agreement with Mennonite faith and practice, and be open to exchanging views with other MC Eastern Canada congregations; send delegates to annual gatherings; participate in regional clusters; and be in relationship with area church resource people that meet with congregational leaders.

Four other congregations were guests at the Leamington gathering as they explore future relationships.

The closings of three congregations—Toronto United Lao; Église Évangélical Mennonite de Rawdon, Joliette, Que.; and Vision Mennonite, London—were mourned, even as many congregational anniversaries, from 25 to 175, were celebrated. Hidden Acres Mennonite Camp, which is celebrating its 50th this year, was acknowledged.

Camp funding was part of the focus as MC Eastern Canada restructures its allotments, while slightly increasing its budget from 2011. The area church inherited four camps with rather different expectations in regard to finances 25 years ago. This year, a decreased amount of money has been put into a “pot” to be spent by the camps in line with MC Eastern Canada priorities of making disciples, growing congregations and forming leaders.

While painful cuts of around $70,000 were made last year, this year a surplus of almost $10,000 was realized through prudent spending and slightly increased giving. The leadership shown in spending resulted in money being put into the Faithful Steward Fund, an operating reserve, rather than withdrawn, and a discretionary retirement fund receiving a much-needed infusion of cash.

According to Ester Neufeldt, operations minister, service and justice ministries are receiving less money, as per previous consultations with the area church. The sense is to let other organizations, including congregations, support service ministries as they feel led, as has been the case with camping ministries of the years.

A highlight for many was a panel from the Steinmann Mennonite Church, Baden, speaking about being a missional congregation. The lay and pastoral leaders from Steinmann noted being surprised at the invitation, but on reflection thought that they were working with their congregation in missional ways.

Over the past five years, the congregation has “moved from looking inwards to looking outside. A carnival, barbecue, Logos youth program that has more youths from the community than the church, mission trips to work with Mennonite Disaster Service, using the church’s new fellowship hall for events to which the community is invited, using 2 percent of its new building mortgage to help fund church building projects around the world, and a new leadership structure that focuses on vision, rather than the nuts and bolts of month-to-month running of the congregation, are all signs of this change in direction, the panel explained. Membership is also less of a concern, replaced by a focus on who is involved.

Responding to the presentation were Scott Brubaker-Zehr for Rockway Mennonite Church, Kitchener, and the pastoral team from Leamington United Mennonite Church. Both congregational reps said that they are seeing small incremental growth in their spiritual health, which is also resulting in ministry being done in and through their church. Leamington pastor Vic Winter noted especially that the “small group” made up of the pastors praying and studying together regularly, and also having fun together, is key in what is happening there. 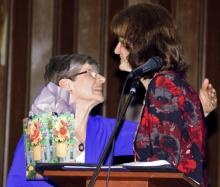