Representing the link between Wittenberg and Lutheran, Catholic, Methodist, Anglican, and Mennonite churches from Papua New Guinea to Arizona, from Sydney to Venezuela. 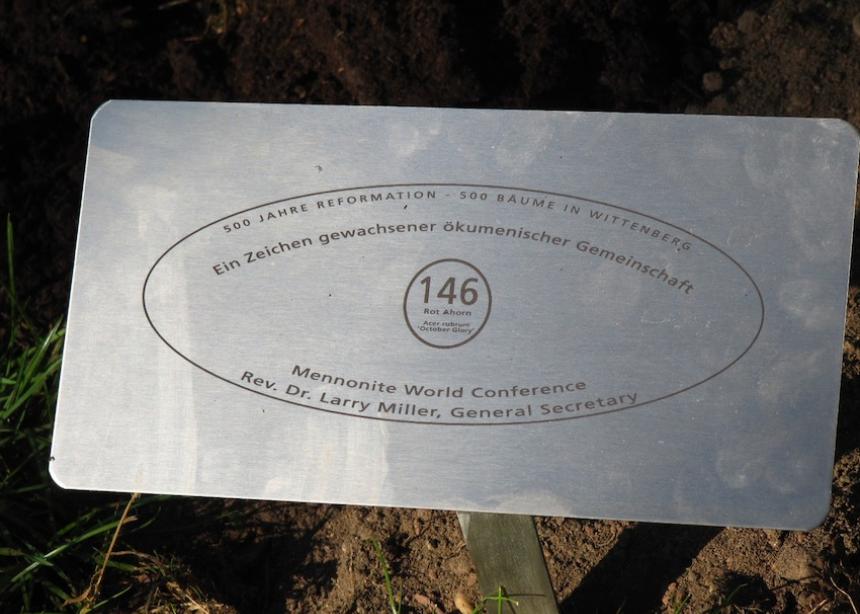 The 'Mennonite tree' is among the 150 maples, ashes, lindens and hawthorns in the garden as a symbol of worldwide unity. (Photo credit: Frieder Boller)

On a cold, blustery day in the German town of Wittenberg, Bishop Yuri Novgorodov of the Evangelical Lutheran Church in Kazakhstan patted down the dark soil at the base of a freshly-planted linden tree. Not more than a hundred yards away, the tower of the Castle Church soared into the bright winter sky.

Currently there are over 150 young maples, ashes, lindens, and hawthorns, and each has a sister tree planted in some corner of the world, representing the link between Wittenberg and Lutheran, Catholic, Methodist, Anglican, and Mennonite churches from Papua New Guinea to Arizona, from Sydney to Venezuela.

In 1517, Martin Luther is said to have pinned his 95 Theses to the door of the Castle Church. In doing so, the monk sparked a split with the Catholic Church that became known as the Protestant Reformation. The Luther Garden is intended to be a peaceful space to reflect what Christians of different denominations share.

The concept was inspired by a quote attributed to Luther: "Even if I knew the world would end tomorrow, I would still plant my apple tree today."

Today, the garden seems sparse, with bare saplings sketching out a growing design.

"Bringing representatives of all our member churches here, is something really special," says Pastor Hans Wilhelm Kasch of the Lutheran World Federation's Wittenberg office. "They say to be present here--even in the form of a tree--at the cradle of Reformation is so meaningful. And at the same time part of the project is to show that the impact of the Reformation is present in so many places in the world and on other churches. The Reformation was the starting point for greater diversity, but today, due to ecumenical dialogues, we find ourselves together again, and our task is to bear a common witness to the world as Christians."

Novgorodov explained that his tree represents a unique bond with the German Lutheran Church, which has been a source of support through times of hardship and persecution.

"For many years our only connection to the western world was through this partnership between Kazakhstan and Mecklenburg," he said of the east German state whose Lutheran Church has long has a special relationship with its sister church in Kazakhstan.

In the Soviet Union of the 1930s, the Lutheran Church was all but destroyed and its members banished to the eastern territories such as Kazakhstan. More difficulties came after World War II, when Stalin viewed Lutherans, who were mainly of German heritage, as potential collaborators with Hitler.

"The Soviet regime didn't like the Christians inside the Soviet Union to have any connection with the churches outside," Novgorodov explains. "But the Lutherans in Astana [the capital and second-largest city in Kazakhstan] found a helping hand from the church in Mecklenburg."

"For me, the planting of this tree is a symbol of our coming back into the family of all the Lutheran churches in the world," he added.

Being part of that community is as important today as it was during the Soviet era. Kazakhstan recently passed new laws restricting religious freedom. Religious communities have to officially register with the government and pay a fee, which the Mecklenburg Lutheran Church is helping to fund.

"With God's grace and the support of our brothers and sisters abroad we are able to face such challenges," said Novgorodov. 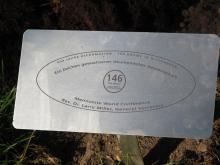 The 'Mennonite tree' is among the 150 maples, ashes, lindens and hawthorns in the garden as a symbol of worldwide unity. (Photo credit: Frieder Boller)