Vernon Erb reflects on 56 years in the trucking business 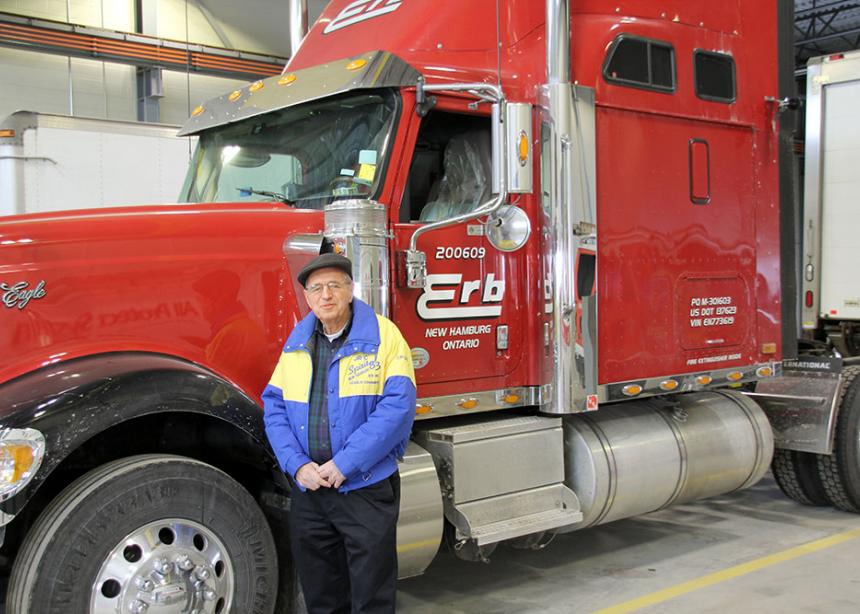 Vernon Erb had a busy fall. Wet weather combined with a late planting season last spring meant the soybeans and corn were hard to get off the fields.

“I guess I’ve gone full circle,” he says with a laugh. Like many Amish-Mennonite boys in the 1950s, he was expected to take over the family farm near Wellesley, Ont. But farming didn’t interest him then like it does now in “retirement.” In the intervening five decades, he built an international trucking firm based in Baden.

In the latest “Erban Report,” the newsletter of the Erb Group of Companies, Erb tells the story of how beginning in 1966 Erb Transport was shipping poultry for Shantz Poultry out of Ingersoll, Ont., to Thunder Bay. The Safeway stores receiving the poultry wanted Erb to also deliver meat from various suppliers in the Toronto area, but Erb didn’t have the licence to do it.

In 1970, Erb Transport was granted a “wide open unrestricted PVC licence [by transfer from another company] to carry refrigerated goods to and from all points in Ontario,” the newsletter states. Immediately, meat from Pillars, Siena Foods and other suppliers was shipped to Thunder Bay. But the trucks were coming back empty since Erb had no licence to ship anything out of Thunder Bay.

Soon Erb made contact with Burns Food, Schneider, Swift and Canada Packers in Winnipeg, to ship their meat from Thunder Bay, where it arrived by train from Winnipeg, to all the small stores along Highway 17 South. Until then it had been moved by unrefrigerated local carriers with many spoilage issues.

Erb Transport focusses exclusively on refrigerated goods and the specialized “reefer” (refrigerated) trucks and warehouses that requires. While deregulation in the late 1980s meant more competition, Erb’s good work and persistence helped his company to outlive the many upstarts that thought they could get into the business and undercut him.

The “another cool move” slogan was invented by Vernon’s wife Viola and identifies Erb trucks all over North America.

When Erb first started out, his father did not like the idea of him being a trucker. He found it difficult to reconcile the stereotypical lifestyle of the trucker, with hard living and drinking, and a Christian lifestyle. But Erb eventually convinced his father and began trucking, with his wife’s work at the then new University of Waterloo supplementing their income.

Although he grew up in the Mapleview-Crosshill congregation, he and Viola have been part of Steinmann Mennonite Church in Baden for many years. Erb has used his gifts in finance and organization in the congregations he has attended.

When he reflects on how his Christian faith influenced his work and business, he talks about how he has dealt with his employees through the years.

One man complained constantly about seemingly everything and finally Erb took him into his office and suggested that this was obviously a bad fit and the man was free to leave. The man changed his attitude and became one of his best drivers. Another, who was proven to be pilfering money and goods, was given another chance; he continued to work without further incident and no public shame.

Erb Transport has not been unionized. Profit-sharing means employees share in the good fortune of the company. Employee committees at each of the 14 terminals meet with management monthly to discuss issues and problems, working together toward solutions.

“There are always ways to improve,” says Erb. He and his son Wendell also try to get to each of the day-long barbecues for employees and their families held yearly at each terminal.

Now “retired,” he notes that he might have been “too attached [to the business] for too long.” When he pulled back and Wendell became general manager and then president and CEO, Erb noticed that his son had a different, more hands-off, way of dealing with the many facets of the business. Like many business founders, Erb was used to having his hand in every aspect and being the go-to person for solutions. Wendell gave department heads and others more freedom to make decisions and implement policy, resulting in more creativity from the employees for the good of the firm.

So in “retirement” Erb farms about 90 hectares just a few minutes from the Erb Transport yard in Baden, still actively interested in the business, but more watching as the next generation moves the “cool” loads.