'Along the Road to Freedom'

Art exhibit honours women who brought their families, often without men, out of Russia to safety in Canada and Paraguay 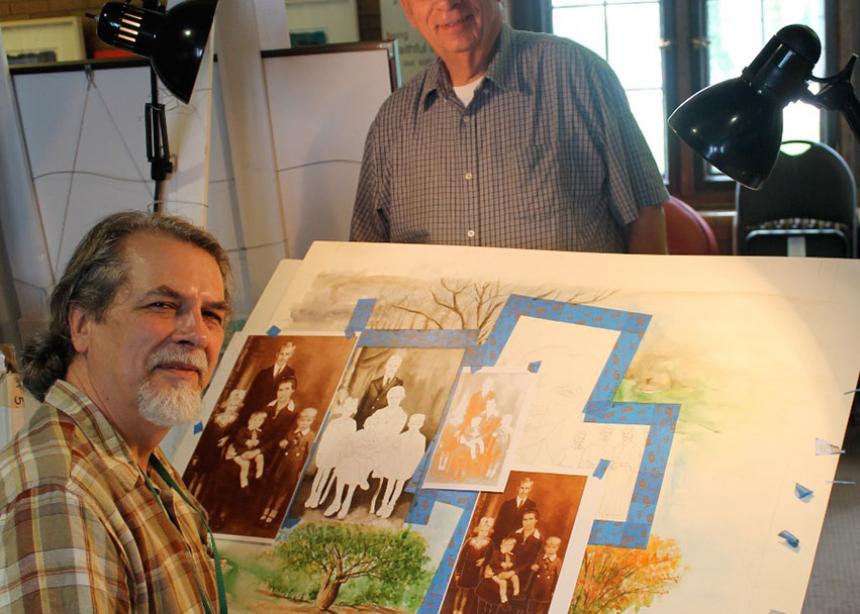 Seeking to honour the faith of Mennonite mothers who single-handedly brought their families through difficult and challenging experiences to safety, Winnipeg artist Ray Dirks has created “Along the Road to Freedom,” a travelling exhibit currently on display at Conrad Grebel University College’s new gallery in Waterloo, Ont.

The women depicted lost their husbands in Russia and were left alone to raise their families during a time of great turmoil, suffering and violence in the 1930s and ’40s.

“They were people who felt utter despair at times, people who clambered through war, but who still, in the end, held onto their faith in God and family,” says Dirks, who is also curator of the Mennonite Heritage Centre Gallery in Winnipeg.

In 1998, many of those children who emigrated with their single mothers from Germany after the Second World War decided it was time to unite in a celebration of thanksgiving for “50 years of peace, prosperity and freedom,” says Hans Funk, one of those children. This gathering was followed by the publication of Road to Freedom, a book that illustrated many of the hardships experienced by this immigrant group.

“But we missed one very, very important item in these two projects,” says Funk. “The courage and faith of the mothers who were left with the children with no means of feeding them, forced to leave their homes and all their basic assets confiscated.”

In late 2008, Dirks says that Funk, along with Nettie Dueck, Wanda Andres and Henry Bergen, came to him, “looking for advice on how to create something to honour mothers like theirs. After many meetings and wide-ranging discussions on what kind of artwork would best suit, I suggested that I could create a series of paintings that could fit the budget we discussed, could tour and therefore be seen by many more people than just [in] Winnipeg, and could become a book once I was finished painting.”

In early 2011, they began to look for families to sponsor paintings.“At first, finding sponsors was difficult, but I was always confident that once people would start hearing about and understanding the project, sponsorships would pick up,” says Dirks.

Funk’s eyes well with tears as he recalls his mother, Maria, who died in 1978 at the age of 81. “It was a simple faith that sustained her,” he says.

He vividly recalls their flight with four other single-parent families from Poland to Germany, following the retreating German army and ahead of the advancing Russians. Travelling in horse-drawn wagons with ammunition flying overhead, Funk, under 10 at the time, says he and his family “were just outside the city of Lask when it was totally destroyed. From a distance we saw Dresden in flames. Not everyone made it,” he sadly reflects.

But the strength of the mothers “who spent time on their knees in prayer left an indelible impression on him. It is stories like Maria Funk’s that Dirks is depicting.

“I paint from photos as much as I am able,” Dirks says. “From the outset, I decided I wanted the paintings to tell the subject’s story in a collage of images and words. I wanted each painting to be a journey along their roads to freedom. For each painting, I would meet with family members, listen to stories, . . . do more research.”

Funk’s oldest sister, Ilse, was born in 1924 with a congenital heart condition. “What she lacked in health, she gained in knowledge,” says Funk. Ilse is the only woman in this project who was not a mother. She gave up her medical studies in Russia to support and care for her family after their father was taken away, working tirelessly to help her family escape and to support them. She died during open-heart surgery in Winnipeg in June 1960 at the age of 35.

“The most powerful one moment for me was attending the unveiling of the Katja Goerz painting at the Tabor Home in Morden and holding the hand of one of the only two surviving subjects,” says Dirks, adding that both are now deceased. “Katja, 96 at the time, told me she wasn’t worth all the fuss. I was very happy to be able to hold her hand and tell her she definitely was worth the fuss.

“The most powerful painting for me is of the one woman who lost everything, all her children and her husband, finally arriving in Canada alone, the poorest of the poor in many ways,” Dirks continues. “Yet she was best known as a lovely, forgiving woman when she passed away in 1974. With no immediate family, I was happy and honoured to create an un-sponsored painting of that woman, Katherine Peters, my great aunt.” 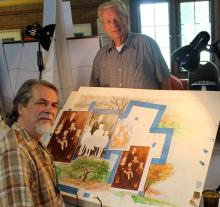