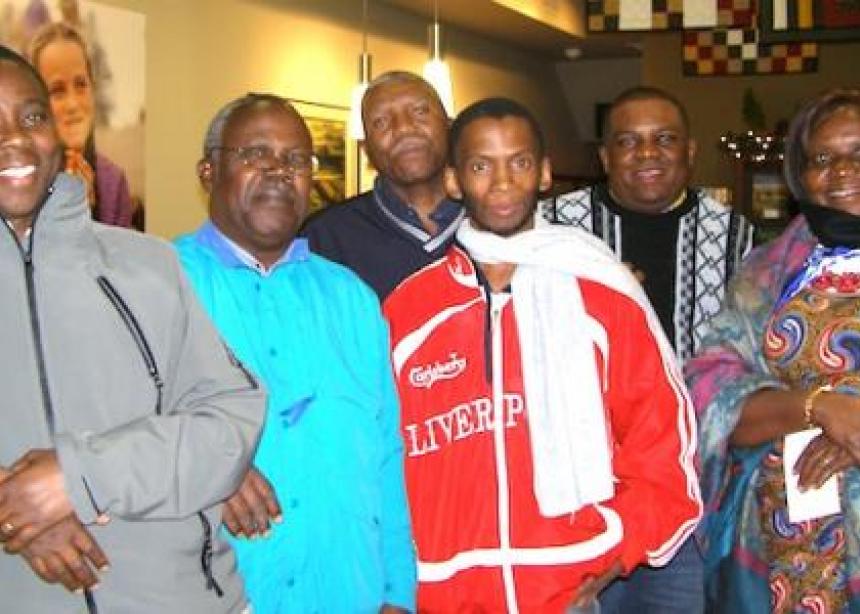 Although Canada is a world leader in mining, its laws don’t ensure that Canadian

“A voluntary code of conduct is not enough,” said Godfrey Walalaze who was visiting Canada and the U.S. in November, 2010 as part of the Mennonite Central Committee (MCC)-Africa Peacebuilding Learning Exchange.

This visit was the second part of a learning exchange. African participants included five African leaders working for churches and Christian organizations in Tanzania, Zimbabwe and Congo. North American participants included five MCC staff working for peace and justice programs in Canada and the U.S.  Although mining was not the only focus of this learning exchange, participants visited mining-affected communities in Tanzania and Canada to gain a better understanding of the ethical, social and environmental consequences of mining.

One of the more serious incidents in Tanzania, he said, dates back to August 1996 when families involved in small-scale gold mining at the Bulyanhulu mining site in central-western Tanzania lost their homes and livelihoods to make way for commercial mining.

He said religious leaders in Tanzania are calling for an independent and comprehensive investigation into the allegations that more than 50 small-scale miners were still in the mineshafts and buried alive when the mineshafts were filled in.

“I know a woman personally who continues to express sorrow and grief because two of her sons were down there,” he said.

Families evicted from the area, he said, have not received compensation and continue to claim that the evictions were swift and brutal, causing enormous economic and social hardships.

The reputation of all Canadians, he said, is being tarnished by these allegations because these accusations are against Canadian-based mining companies.

Walalaze said he and many others who have access to international news through the Internet were watching closely the debate in Canada on Bill C-300. A private member’s, bill C-300 was drafted to develop corporate responsibility standards for Canada’s gold, gas and oil companies working overseas and to give the Canadian government the power to investigate allegations of human rights and environmental abuses.

“This bill was not the solution to everything but it would have been a very good way to solve two-thirds of our problems,” he said.

The bill was defeated in late October in a vote of 140-134. Walalaze encourages Canadians to continue advocating for new legislation that addresses mining injustices.

“Just because this bill was defeated doesn’t mean that the issues can’t be debated again,” he said. “Justice is not an event—it is a process.”

During their visit in Ontario, the African church leaders travelled to Timmins where they met with representatives of several First Nations communities.

Walalaze said he found many similarities in the lives of people in Aboriginal communities and in Tanzania. “The similarities are how people value the land and talk about the land,” he said.

“The land is the centre of our relationship to God, to each other and to our existence. That is how we relate to the land—it is the source of our life. I was surprised to see a group of people here in Canada who had values very similar to ours.”

Walalaze said “the mission of the church is to identify with the poor” and he is hopeful congregations in Canada and the U.S. will explore ways to advocate for mining justice.   Learn more about mining justice by visiting ottawa.mcc.org/miningjustice and washington.mcc.org/issues/environment/mtr