Addressing the issue of extreme poverty in Canada

MC Canada pleads with the government to ‘do the right thing’ 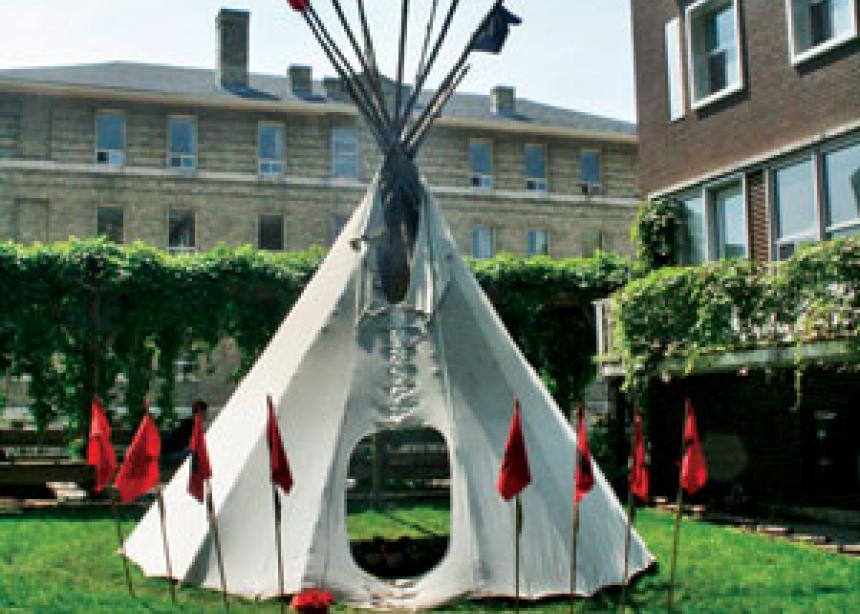 The sacred fire, protected in a teepee that was set up by representatives of the Aboriginal Peoples of Canada at the World Religions Summit 2010, was lit to act as a doorway for the entrance of the ‘Spirit.’

Of the 192 member countries of the United Nations, Canada ranks fourth on its Human Development Index, but Canada’s First Nations rank 68th.

According to Edith Von Gunten, who co-directs Mennonite Church Canada’s Native Ministry alongside her husband Neill, “There is a lot of work to do right here in Canada. . . . The treaties are not being honoured or respected.”

A step to right this situation was taken at the World Religions Summit 2010 that took place from June 21-23 at the University of Winnipeg. The summit was held a few days before the leaders of the G8 countries met in central Ontario, with Canadian Prime Minister Stephen Harper acting as host.

Despite this step in the right direction, there has been a great deal of wrong in the past that must be taken into account, according to speaker Justice Murray Sinclair, who discussed these past wrongs in detail. The First Nations have had their “strength and resilience taken away and have been weakened in faith” because of the way Canada has treated them, he said.

David Courchene of the Anishnabe Nation lamented the fact that Aboriginal Peoples “are a unique, beautiful, spiritual people, but remain at the bottom of the socioeconomic ladder in this country.”

According to Neill Von Gunten, “Canada has Third World living conditions in our own backyard. . . . You don’t have to go overseas to see a Third World nation.”

Education is one thing that the Von Guntens believe needs to be addressed on and off reserves. The Millennium Development Goal to achieve universal primary education needs to be taken a step further for Aboriginal Peoples, they say.

Educating Aboriginal Peoples to become midwives, nurses and doctors, for example, could save the government money, because many in rural parts of the country are currently flown to urban areas to give birth and for other medical procedures, where they are alone in the hospitals, having left behind families for extended periods of time.

If Aboriginal Peoples were educated to these levels, it would also allow them to be treated by those who “understand [their own] people the best,” Neill said.

For the Aboriginal Peoples of Canada, “education is the key to making the other Millennium Development Goals happen,” he said.

Canada is denying these people their rights that are enshrined in the Constitution and they have been for a long time, Edith suggested.

However, with only five years left until the deadline to fulfill the Millennium Development Goals, the Von Guntens are sceptical that these goals will be fulfilled for the poor and vulnerable in Canada.

“It takes a government willing to do things,” Edith concluded.

The sacred fire, protected in a teepee that was set up by representatives of the Aboriginal Peoples of Canada at the World Religions Summit 2010, was lit to act as a doorway for the entrance of the ‘Spirit.’