Saskatchewan guide helps others meet God in the wilderness

January 15, 2014 | God at work in Us | Number 2
Story and Photo by Donna Schulz | Saskatchewan Correspondent 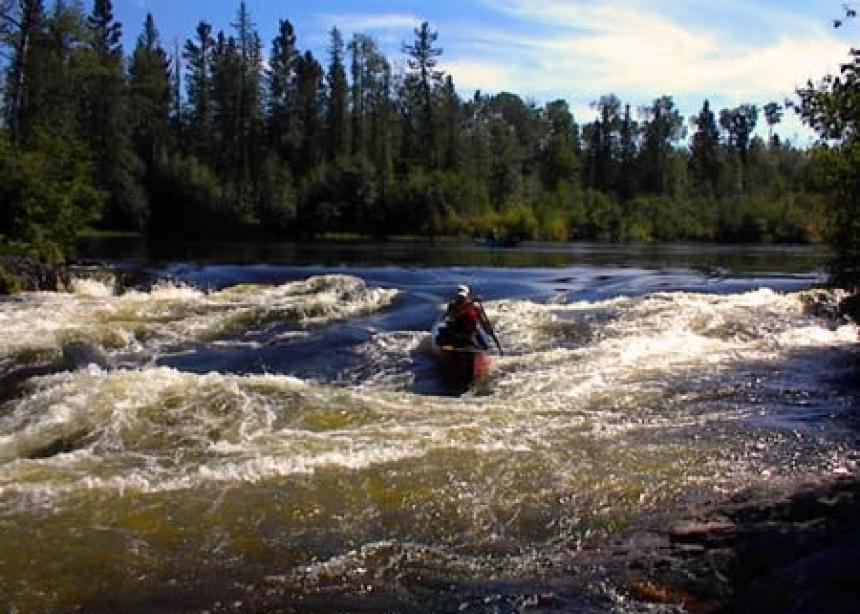 The trickling of an indoor waterfall in the room where Ric Driediger sits evokes images of a northern stream while he reflects on 40 years on the waterways of northern Saskatchewan as a canoeing guide.

His career began in 1972 when, at 19, he was invited to help guide a group of Mennonite students on a canoe trip. When asked how much he would like to be paid, he began to see guiding as a career possibility.

Driediger took courses in guiding, leadership, navigation and wilderness camping, and also learned through relationships. LaVerne Jantz, who hailed from his hometown of Drake, Sask., invited Driediger to join a group of young people in exploring how God uses the wilderness for spiritual growth. For the next four years, Jantz became his mentor, as the two travelled everywhere together.

In 1975, Driediger, Jantz and two other friends started a Christian camping organization called Wilderness Trails. They worked with youth and young adults, charging up to 40 percent of their costs and expecting to make up the remainder through donations. This worked well when they only led six canoe trips a year, but when that number grew to 40 trips they found their business model wasn’t sustainable.

Meanwhile, Driediger started Horizons Unlimited, a business he hoped would operate at a profit and finance Wilderness Trails. Offering services to the general public, the business didn’t keep Wilderness Trails afloat, but it did help him and his staff develop a name for themselves.

In the mid-1980s, Horizons Unlimited purchased Churchill River Canoe Outfitters of Missinipe, Sask. In existence since 1964, Churchill River is the second-oldest canoe tripping company in Canada. Since then, “more by time than by design,” Churchill River and Ric Driediger have become synonymous with canoeing in Saskatchewan.

Another important figure in Driediger’s life was well-known Ontario canoeist Bill Mason. Mason became friends with Driediger and his wife Theresa when she worked on her master’s degree in Ottawa.

In 2013, about 7,000 people came through Driediger’s office, mainly from Saskatchewan and Alberta, but also from other parts of Canada, the U.S. and Europe. In June, people come to fish, while July and August are geared more towards canoe trips. He especially enjoys hosting pastors who will discuss theology with him, and looks forward to hosting a retreat for Mennonite Church Saskatchewan pastors in September 2014.

Whether with pastors or the general public, Driediger finds that “spiritual subjects come up all the time. I believe God reveals himself through nature,” he says. “Millennia before the Bible came to be, that’s how people found out about God. They looked at what God had created.”

When people return from a canoe trip, he encourages them to talk about their experiences and their spiritual and emotional responses. “People will talk about sitting on the shore of a lake in the early morning . . . and just looking out across the water,” he says.

Being caught in a storm will also get people thinking. “Nature is so powerful and we don’t have control,” he says. When people experience these things, he says, “they’re feeling a reflection of God in some way or another.” As he asks them questions, his guests discover for the spiritual truths they experienced in the wilderness.

The Driediger children, Dan and Sarah, both students at Canadian Mennonite University in Winnipeg, work as guides in the summer months, as do a number of their friends. He also recruits guides from colleges that offer related programs. Staff are expected to make a long-term commitment, as it takes three to four years to become a good guide.

Churchill River also employs people from the nearby first nation community of Grandmother Bay. Although not without challenges, the relationship is deeply rewarding. Driediger has many stories to tell about his indigenous staff and the impact they have had on his life.

The canoeing season lasts five months and that means seven months are spent away from camp. Driediger has yet to find the ideal winter pastime. His home-based tent- and tarpaulin-manufacturing business, while profitable, isn’t enjoyable. He has also taught business administration and marketing some winters. Such opportunities, while more enjoyable, aren’t always available.

Meanwhile, he pursues his interest in theology, preaching when invited, and leading a student-initiated Bible study at Rosthern Junior College. And, undoubtedly, as the water continues to trickle in the room where he sits, he looks forward to another summer of encountering God in the wilderness. 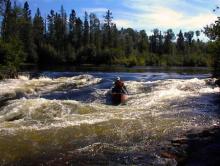 Ric Driediger loves telling stories about his life as a canoeing guide. (Photo by Donna Schulz)