Already surpassing its $1 million target in donations, Mennonite Central Committee is part of Canadian Churches in Action, which has applied for funds from the Canadian government’s East Africa Drought Relief Fund for a $3.9-million response for nonfood items in Kenya. 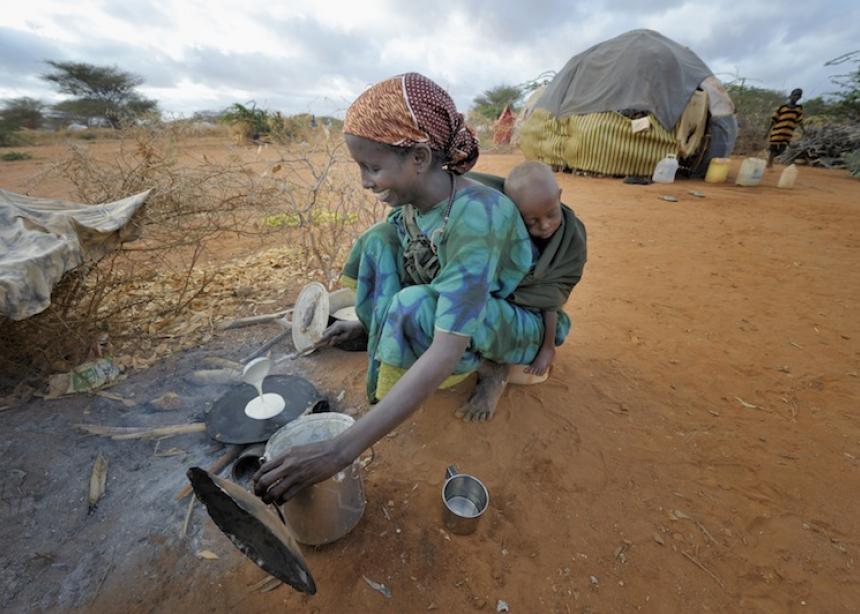 Mennonite Central Committee (MCC) has surpassed its initial target of raising $1 million for the East Africa drought and is now expanding its response to the continuing crisis in Kenya, Ethiopia and Somalia.

“We are both elated and humbled by people’s willingness to entrust MCC with their contribution,” said Willie Reimer who directs MCC’s food and disaster program.

“The needs are great and the crisis will not abate for a long time. We are providing much-needed emergency food assistance and longer-term support to help communities adapt to drought, high food prices, climate change and other causes of hunger.”

To date MCC has allocated approximately $700,000 in MCC funds for this disaster response. This total jumps to $2.3 million when MCC’s response through Canadian Foodgrains Bank (CFGB) is included.

MCC is planning to provide emergency food assistance for internally displaced people and their host families around the Somalia border town of Dhobley, the last town in Somalia before crossing into Kenya. MCC also plans to assist Somalis in the Dadaab refugee camp in Kenya. In both places, safety and security remain a significant concern so disruptions are possible.

An estimated 11 million people in the horn of Africa have been affected by the current drought. Conflict, problems accessing food and skyrocketing food prices have added to the crisis.

\One of the most drought-affected countries is Somalia, where ongoing conflict and the absence of a stable government have made it difficult to get humanitarian aid to the people. Thousands are fleeing their homes and livelihoods in order to survive.

“These families have no support systems to turn to for help,” said Reimer. “Their crops have failed, their animals have died and there is a critical need for emergency food assistance.”

The food distribution in Dhobley is a joint effort including World Concern, the Christian Reformed World Relief Committee, CFGB and MCC.

Food is being distributed through the use of commodity-based vouchers. Under this system families selected for food assistance use vouchers to buy food from local merchants or traders. The traders then present the vouchers they have received to the World Concern office where they are paid through an electronic banking system.

Traders and merchants are used because they have experience in distributing food in difficult circumstances, explained Reimer. This voucher system has been used before and is considered to be an effective approach for food distribution in countries where it is difficult to get food and other humanitarian aid to vulnerable people.

In collaboration with CFGB, MCC is supporting food-for-work projects in Kenya that provide thousands of Kenyan households with cooking oil, maize and beans for participating in the construction of 92 sand dams and 25 wells.

In southeastern Ethiopia, MCC has committed an initial $200,000 to support emergency relief efforts in two districts of the Oromya region for up to six months.

This project is being developed and coordinated by MCC staff in Ethiopia and the Relief and Development Association (RDA) of the Meserete Kristos Church in Ethiopia, an Anabaptist denomination and member of Mennonite World Conference.

Meanwhile, MCC is part of Canadian Churches in Action, which has applied for funds from the Canadian government’s East Africa Drought Relief Fund for a $3.9-million response for nonfood items in Kenya.

For every dollar Canadians contribute to registered Canadian charities responding to the East Africa drought, from July 6 until September 16, 2011, the federal government is setting aside one dollar for the fund. The Canadian International Development Agency (CIDA) then allocates these funds to established Canadian and international humanitarian organizations to ensure an effective and timely response.

“MCC has years of experience working in East Africa, we have workers on the ground and a network of committed and proven partner organizations,” said Reimer. “We are responding to the present disaster situation but at the same time we are continuing to work with our long-term partner organizations to help lessen the effects of future droughts.”

Donations to support MCC’s response can be made online, mcc.org, or at any MCC office. Gifts should be designated for “East Africa Drought Response.” MCC encourages you to pray for the people of East Africa at this time of crisis.