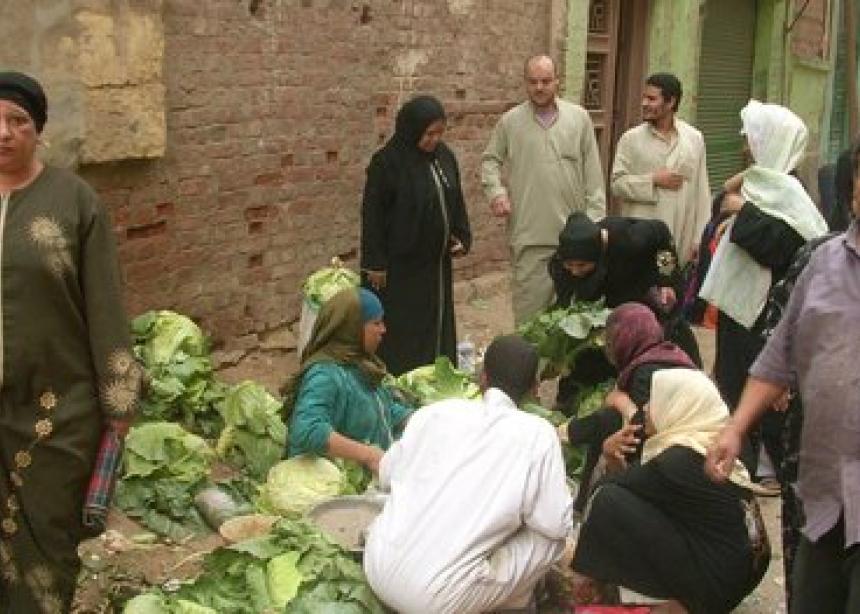 Long queues in Cairo have been common over the past few days outside bakeries selling subsidized bread, supermarkets and vegetable sellers. --Photo by Adam Makary/Al Jazeera English

Mennonite Central Committee (MCC) has moved its international workers out of Egypt because of the ongoing civil unrest there.

Thirteen international staff, including two children, were temporarily relocated to MCC’s West Europe office in Strasbourg, France, earlier this week. Another MCCer working in Africa was vacationing and visiting family in Cairo when the unrest began. She is now back in Africa.

MCC also has three national staff in Egypt, all of whom are doing as well as can be expected under the circumstances, said Tom Snowdon, MCC Egypt co-representative with his spouse, Judith Snowdon. The Snowdons are from Saint-Joseph-De-Kent, N.B.

“They are safe in their homes and hoping and praying for an end to the uncertainties,” he said via email.

MCC relocated its international workers because there were concerns for the safety of workers and MCC work in Egypt was at a standstill. MCC also wanted to save its partner organizations in Egypt from worrying about how to care for the workers.

“We didn’t want our Egyptians friends and partners to spend too much time and energy caring for us when they should be thinking about and doing other things,” said Snowdon.

At one point a church organization MCC partners with supplied stranded MCC workers with money to help with their attempts at leaving. Another time a priest called and offered to send a van to collect MCC workers in Cairo and take them to a church house outside the city.

Trying to leave was an ordeal, he said. “Limited phone service, no internet and extremely difficult transportation due to the curfew and congestion all made it very difficult to do anything. The Cairo airport was in chaos and the crush of people got scary at times.”

Snowdon said that on the streets, order was being preserved throughout the city by local men. They blocked off streets at night to guard their homes and neighbourhoods.

“They possess whatever weapon they can acquire; some guns, huge knives of various sorts, sticks and pipes. They exhibit joy in protecting foreigners, and tell everyone, ‘We are sorry for this inconvenience!’ and ‘Welcome to Egypt.’”

The relocated staff are doing well, “just a little tired and jangled,” he said. Given the uncertainty in Egypt it isn’t clear where the workers will go after they have been debriefed at the MCC office.

“We all want to go back as soon as possible to help in any way which is appropriate for foreigners to do,” said Snowdon. “But it is true that the future there is uncertain and we don't want to sound heroic and to minimize that reality.”

MCC’s work in Egypt focuses on education and peacebuilding.

Long queues in Cairo have been common over the past few days outside bakeries selling subsidized bread, supermarkets and vegetable sellers. --Photo by Adam Makary/Al Jazeera English