‘They are not alone’ 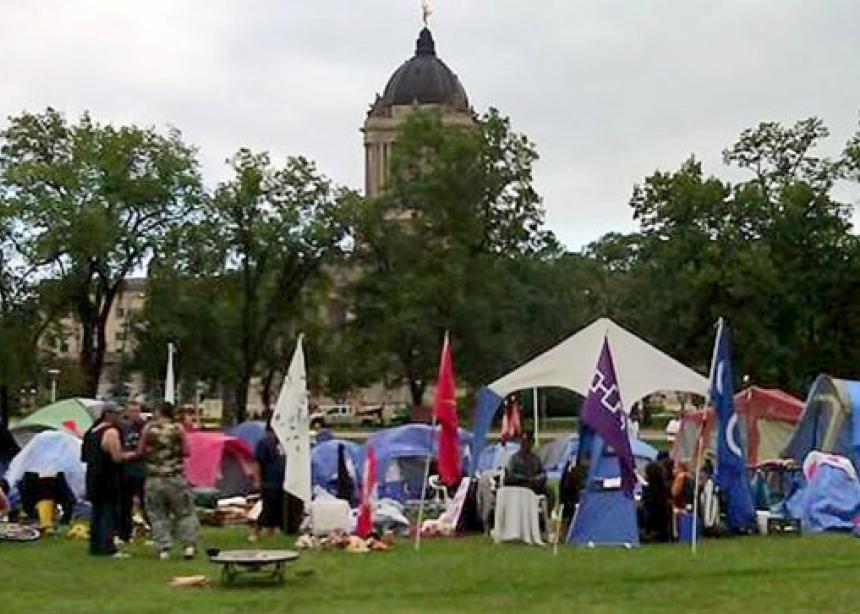 Melanie Kampen camped out at the Native Women’s Protest site near the Manitoba Legislature in Winnipeg earlier this month, to protest the government’s lack of response to the 1,182 missing and murdered indigenous women from across Canada. (Photo by Chris Swan)

On a very windy, cold and dark Oct. 3 night, Steve Heinrichs, director of indigenous relations for Mennonite Church Canada, and a few others strung 20 dresses on fishing line on both sides of the Esplanade Riel pedestrian bridge that spans the Red River near The Forks in downtown Winnipeg.

“We lifted up prayers before, during and after, and hung the dresses as visible prayer signs that say, ‘Someone hears the cries of those mourning the missing and murdered indigenous women; someone will honour it,’ ” Heinrichs said.

In June, a report released by the RCMP stated that 1,182 indigenous women have gone missing or have been murdered since the late 1980s or early ’90s. Heinrichs wants Mennonite churches to sit up and recognize that these murdered and missing girls and women are their sisters and daughters too.

Tina Fontaine, who made national news when her body was discovered in August, lived in Heinrichs’ neighbourhood. Heinrichs and his wife Ann have two adopted indigenous daughters and a biological son. The issue hits home for him. “They are my neighbours,” he said. “They look like my girls.”

Melanie Kampen, a member of Springfield Heights Mennonite Church in Winnipeg, said she joined the effort because “I wanted to do something to raise awareness and act in solidarity with those who are mourning and grieving the loss of their loved ones.”

“I wish that the Mennonite community would pay a lot more attention to things like this, and would empathize with people and their suffering,” she said, noting that “Mennonites have their own stories of so much suffering, coming from Russia and Ukraine, that it is hard for me to understand why there is not more empathy, especially for something like murdered and missing indigenous women and young girls.”

Grace Mennonite Church in Steinbach is one church that responded to the open invitation put out by the Sisters in Spirit, a group from the Native Women’s Association of Canada, that has held annual vigils across Canada on Oct. 4 ever since Amnesty International shone a light on the number of missing and murdered indigenous women.

“This year, nine of us from Grace attended the vigil at the legislative buildings,” said Kyle Penner, associate pastor. Grace Mennonite has partnered with the Pauingassi community in northern Manitoba, and he said that relationship has prompted church members to look at ways of “standing in support and solidarity because we believe that something in this relationship between settler and indige-nous people is broken”.

“Often you feel paralyzed by the enormity of an issue,” said Heinrichs. “We need to nurture some kind of hope, so we don’t go into despair. This act of hanging dresses is not going to change much, but if there are some people that see and know that it is non-native people responding to indigenous cries for justice, that can be encouraging. They know they are not alone.”

“As treaty people, we are a covenanted people,” he continued. “I would like to see the church make indigenous concerns its concerns. We need to find ways of putting the issues that we hear today of missing and murdered women, a lack of a real treaty relationship and ongoing questions of jurisdiction over land at the core of our work. . . . It begins with awareness and deep lamentation.”

Melanie Kampen camped out at the Native Women’s Protest site near the Manitoba Legislature in Winnipeg earlier this month, to protest the government’s lack of response to the 1,182 missing and murdered indigenous women from across Canada. (Photo by Chris Swan)

Flowers are laid out on the Manitoba Legislature steps in Winnipeg in the pattern of a butterfly at the annual Oct. 4 vigil honouring the 1,182 missing and murdered indigenous women from across Canada. It was one of 130 vigils held this year. (Photo by Kira Burkett)