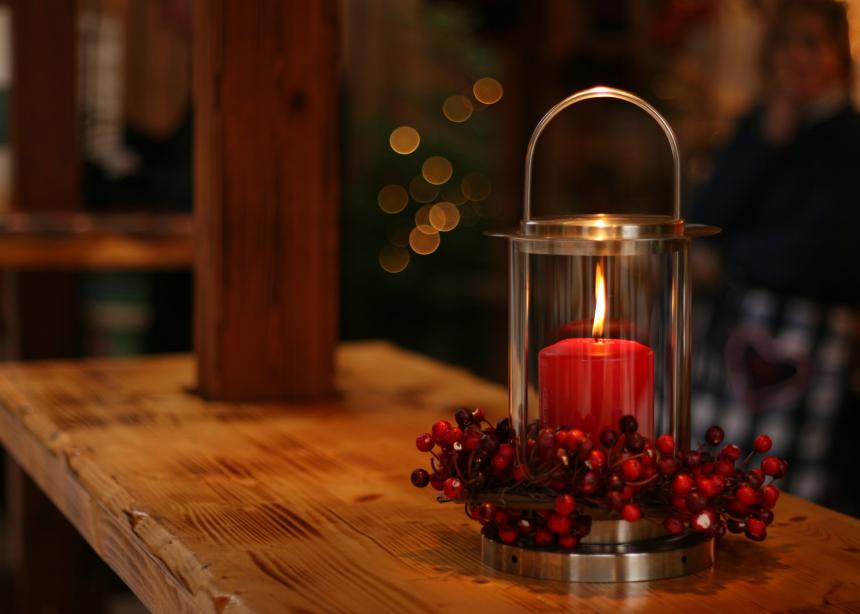 Christmas is a difficult season for many people, myself included. As a Christian, I “should” be celebrating the birth of Jesus. The angels sing of “great joy” as the lowly and the mighty come to bend the knee at the crude bedside of the baby. The Incarnation is what makes Christianity profoundly different from all other religions. We exclaim it as a specific historical event–“The” Incarnation–but also as something that transcends time and cultures.

All this I acknowledge, but I still don’t like Christmas very much.

This column should say something profound. Maybe about the Advent season in Palestine, occupied in 1st and 21st centuries. Or the baby and parents who became refugees. Or reframe Joseph and Mary as José and Maria and tell the story anew (for an evocative image, do an online search for “Everett Patterson, José, Maria”). Instead, I crave a glimpse of “delight.”

Northern Saskatchewan started out mighty cold my first Christmas in Canada. Then the temperature dropped into the -30° range. I headed for the Christmas Eve service at the church up the hill, taking the long way. On went the cross-country skis. I shuffled along the snowy, nearly empty streets of town, then into the ski trail system. After passing bigger houses lit by the kaleidoscopic brilliance of long strings of glorious colour, I entered the forest under a full moon.

The trail crossed a frozen inlet, then joined a snowmobile track and headed back toward town. The moonlight was diamonds scattered across the crystalline snow, but glistened better than diamonds. As I rounded the corner of the rocky point of land, ahead stood the Anglican Church prominent on the shore. I skied past it, across the road, and up the hill to the Catholic church. I laid the skis and poles at the manger outside and went on in.

All of it was mystical. It felt like being one of the early visitors to see the Christ child. Coming across the desert/lake ice, with celestial light, though bringing only myself as a gift—the Gospel does say we are each a gift of inestimable worth.

Such a contrast too. The diamond snow and the crowded midnight mass full of cheery people and tired children, versus the unpeopled streets with the garish lights on big houses and whatever might be going on inside in private.

I spent Christmas Day opening all the holiday cards sent to me by friends and family back home. I was surrounded by real people incarnated as envelopes filled with love.

There are other memories on this theme of delight. For years I worked at a ski resort in Utah. Once a year, I hit the slopes dressed as Santa. “Daddy, Mommy, loooook!” said kids, the word drawn out in wonder. “Santa is skiing with us!” I explained that Santa was a bit too full of cookies this Christmas Day and had no hope of falling asleep. What fun for all of us.

Then there was the Christmas in another city and a recommendation to go to Christmas eve service at a nearby mega-church. That service turned out to be as splashy and overwhelming a production as any Las Vegas stage show. The interactive element of the service consisted of holding aloft our electronic wristbands at certain points as the computer signalled them to turn different colours. There was no delight.

Meaning comes in many ways, and often in the still, small, simple ways. The message I hope comes across here is that we can de-light Christmas and have more delight in Christmas.

Randolph Haluza-DeLay lives in Toronto where the skiing, cold and snow do not bring enough delight.

Read more Mind and Soul columns:
Writing for the foyer
What is your theory of social change?
Climate imagination
Cycling the Black history of Ontario
Faithfulness in the face of facts

This text made my day. Thank you so much for it, Randy!

What a lovely piece, unpacking through storytelling and direct experience the true unexpected and simple origins of genuine delight as opposed to our many manufactured attempts (be it through consumerism or flashy services) to "make" it happen.

Thank you Randy for sharing your stories. I too find myself de-lighting the holiday a bit more every year. It's all gotten so commercial. I long for simpler times when people said "thank you" for holding a door and putting up Christmas lights was meant to honour the Christ child not to outdo the neighbor next door.