Cycling the Black history of Ontario 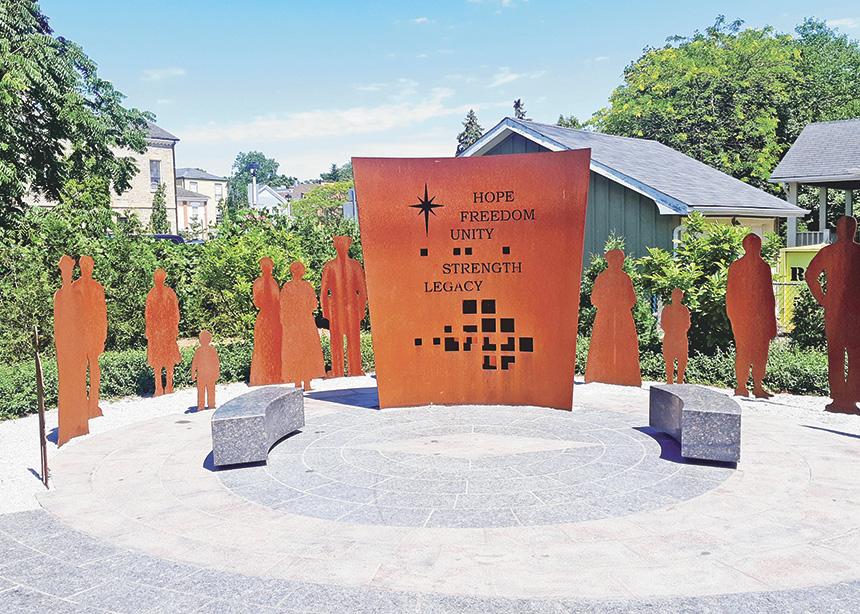 The Voices of Freedom Park in Niagara-on-the-Lake. (Photo by Randolph Haluza-Delay)

When I moved from Alberta last year, my explorations of Ontario began by bike. My cycling companions showed me things I had not heard of. Once, we biked past the towering statue of some military guy on the heights above the town of Queenston. Just a day earlier, we had cycled around another part of the Niagara Region and found a historical marker about a “negro burial ground.” Such wording!

We discovered other relatively out-of-the-way historical plaques for important moments of Black history in Canada. Our guide was Jacqueline Scott, who blogs at “Black Outdoors.” Have you heard of Solomon Moseby, Chloe Cooley (the subject of a new Heritage Minute), Josiah Henson, Mathieu da Costa (depicted on a Canadian postage stamp), and Amber Valley (another stamp)?

But just as Mennonite heritage has multiple roots and branches, there is no single “Black history.” The record shows that, even in 1840s Ontario, many were “a far cry from the stereotype of the panting fugitive recently arrived from the bowels of slavery,” in the words of historian Adrienne Shadd. Black Loyalists rooted in Nova Scotia, the Black pioneers of Alberta, African immigrants and Indo-Caribbean settlers make up parts of the contemporary Canadian mosaic.

“Did we have slavery here in Canada as well?” asked someone. Yes! And it was as brutal as slavery south of the border. Human beings were property. Property has no rights. At the same time, some Black people were free. How some could be property while others were persons is inscrutable to me.

However, this racial logic was con- sistent across all the European powers with imperial ambition. Colonialism is a logic of control and domination. Colonialism uses force to maintain control, legitimized by laws and bureaucratic procedures. Indirect control comes through education, media and religion.

Sadly, Christianity has been part of the colonizing project. At its worst, religion cloaks exploitation. This is what Marx rejected in declaring religion a narcotic—the famous phrase about “religion as the opium of the masses.”

Some exclusions of the church are social, such as lack of access for people with disabilities. Other exclusions are given theological justification. For some 600 years, Black people were described as the “Children of Ham,” Noah’s discredited son, which made their supposed inferiority “divinely ordained.” Oppressive theologies have operated against women, Indigenous peoples, LGBTQ+ people and others.

There will never be true equality if the power dynamics and other consequences of oppressive theologies still linger. That is the work of “decolonization.” Changing language—“freedom seekers” instead of “runaway slaves”—is one step. Maybe the government proclaims Aug. 1 as Emancipation Day to remind all Canadians that the British Empire sort of ended slavery on that date in 1834.

In July, Prime Minister Justin Trudeau apologized for government discrimination in the armed forces during the First World War. But the deeper work is to uncover taken-for-granted attitudes and to allow power to flow in different directions.

The papal visit to Canada at the end of July will be incomplete if it does not repudiate the Doctrine of Discovery that set out non-Europeans as inferior and allowed their lands to be taken by European powers. As people following a God whose deep desire is for all peoples to flourish, we seek to uncover truth, turn from sin, act for reconciliation and make right the wrongs that have been done. It is not an easy task. History remains a fallible record of the past in need of revision.

Randolph Haluza-DeLay lives in Toronto and thanks his cycling companions for reading earlier versions of this column. 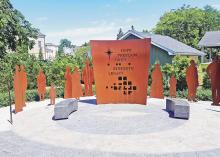 The Voices of Freedom Park in Niagara-on-the-Lake. (Photo by Randolph Haluza-Delay)

Thanks for offering me a glimpse of what decolonization means, I'd like to hear more about this.

Good connecting the dots on the pathway of the journey towards decolonization! We can catch only glimpses of a new Heaven and a new Earth - but what hopeful glimpses.

Grateful this conversation is continuing, hopefully deepening. I never hear about Canadian Black History - encouraging to have names to look up!