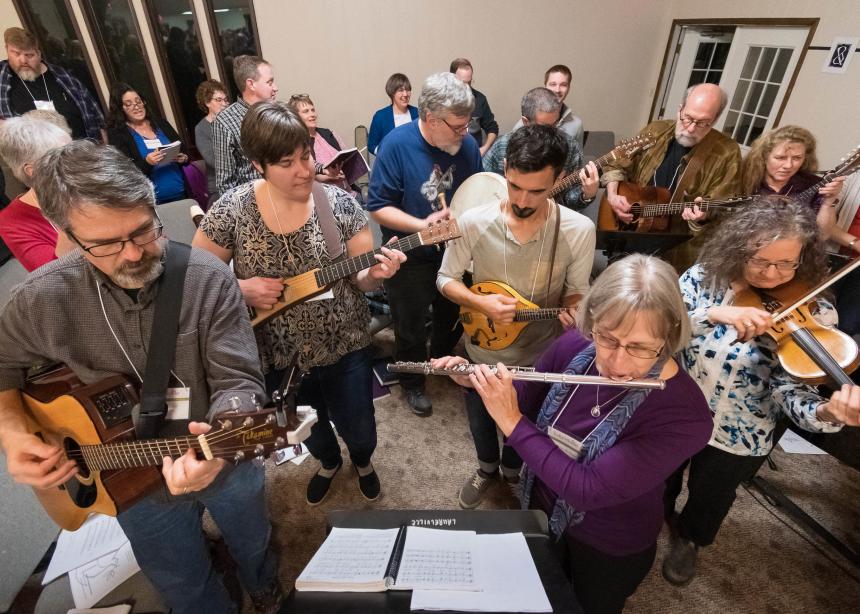 In the 1980s, Ken Nafziger drew inspiration from publisher and camp association president Levi Miller, and began leading a music retreat at Laurelville.

It was initially designed to develop church song leaders. Several years later, Marlene Kropf and Marilyn Houser Hamm joined Nafziger in giving leadership to what is now called Laurelville’s Music and Worship Leaders Retreat. The emphasis changed as Hymnal: A Worship Book was being developed and new material was being tested for possible inclusion in the collection.

Three years ago, Bradley Kauffman, general editor and leader of the Mennonite Worship and Song Committee, began giving leadership to the weekend.

In 2018 and 2019 the committee tested material at Laurelville for possible inclusion in the forthcoming Mennonite worship collection, Voices Together, due for release by Herald Press this fall. This year they taught new material from Voices Together.

Amy Yoder McGloughlin, pastor of Frazer (Pa.) Mennonite Church and a resource person for the retreat, delivered a greeting from Houser Hamm to the 167 participants who gathered from at least eight states and two provinces: “[Here] we are remade, reshaped and renewed to move into this world with direction and with purpose as nothing else can do.”

Under the guidance of Kauffman and five other committee members—Benjamin Bergey, Katie Graber, Anneli Loepp Thiessen, Daryl Neustaedter Barg and Adam Tice—those assembled Jan. 10-12 learned 48 songs slated to appear in Voices Together and prayed through dozens of worship resources.

Other resource people included composers and musicians Angie and Jim Clemens and Michelle Burkholder, associate pastor at Hyattsville (Md.) Mennonite Church, who led a session on planning for visual worship.

But most participants came for the music.

“I’ve been here for about seven of the last 10 years,” said Mark Diller Harder, pastor of St. Jacobs (Ont.) Mennonite Church. “We love to sing in my congregation, so I come every year I can.”

As the weekend was wrapping up, Ingrid Loepp Thiessen said, “I feel like I have been singing the vows of my baptism. [The Voices Together committee] has given us the tools of revival.”

Charlotte Rosenberger of Plains Mennonite Church (Hatfield, Pa.) added, “We sing our theology. It is our Eucharist.”

Kauffman, the new hymnal’s general editor, noted not all Mennonites use hymnals.

“Our prayer is that Voices Together will give us avenues to learn what is life-giving and vital among all Mennonites,” he said.

The emotionally charged weekend culminated on Sunday morning, after participants affirmed the work and sacrifices made by the 13-member hymnal committee and their families, when attendees erupted with exuberant applause and a standing ovation.

“These songs are how I hold on to God and how those I love hold on to me,” said text editor Adam Tice in his sermon. “I have learned to hold them with an open hand. Each generation adds additional stanzas and their own harmonies.”

Related stories:
Behind the scenes of Voices Together
“’Twas in the moon of wintertime” not included in new Mennonite hymnal
Voices Together committee holds final meeting
A farewell to the 'blue hymnal'
Bringing diverse voices together