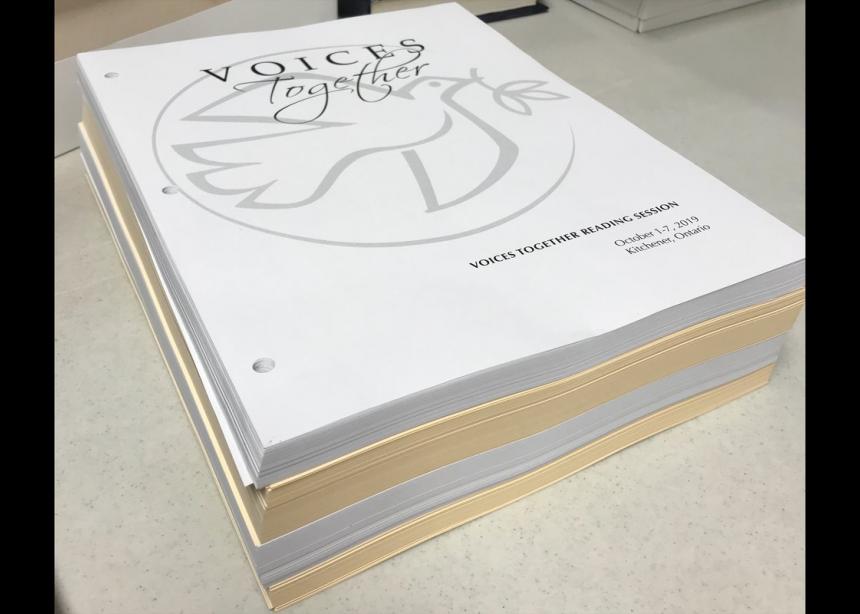 A stack of paper containing 780 songs and a binder of 320 worship resources greeted each member of the Voices Together committee when they arrived for their 10th and final committee meeting in early October.

In nine previous meetings, the committee had discussed content to include in this new worship and song collection for the Mennonite church. But this was the first time committee members saw selections all together. The committee spent five days of their meeting singing and worshipping through it, followed by two days discussing the selections.

“Because all new songs and worship resources were anonymized in the first three years of our discussions, Meeting 10 was the first time everyone saw who wrote the different pieces,” said Bradley Kauffman, Voices Together’s general editor. “Our work until now has been on computer screens, so it was momentous to be able to see and hold hard copies of each piece.”

At least one verse of each song that the committee plans to include in the new worship and song collection was sung while the group was together, meeting at Erb Street Mennonite Church in Waterloo, Ont. All new songs were sung in full. Each worship resource was read in its entirety, and works of visual art were viewed as a series.

“Every single song and worship resource represents so much work around our circle to even get them to this draft point,” Kauffman said. “So much research and detail work come together to make just one page in Voices Together.”

“We all brought different gifts, and each of our gifts was clarified in this process,” said Anneli Loepp Thiessen of Ottawa. “It has been hard work but has also been personal devotion.”

The goals of this final meeting were to:

• Affirm the collection that is Voices Together.

• Equip committee members to understand why each song or worship resource is included and be able to tell its story.

• Celebrate and bless the good work that has been done.

“Look at the images and structures in these songs and worship resources. What do they say about what we believe?” asked Allan Rudy-Froese of Elkhart, Ind., and Waterloo. “We are singing and proclaiming new ways of being and organizing the world around God.”

“It is energizing to see the thousands and thousands of decisions we’ve made show up on the page,” said Sarah Kathleen Johnson of Toronto, the worship resources editor. “While recognizing that we must continue to work on all kinds of balance, the larger stories that Voices Together is telling are beginning to emerge.”

Committee members came prepared to share about one worship resource and one song that has been meaningful in this process.

Mike Erb of New Hamburg, Ont., lost a brother to suicide two years ago. Adam Tice of Goshen, Ind., the text editor, had a dream of standing with Erb in that experience. “I dreamed that the committee was together, and Mike wanted to sing something for us. When I woke up, I wrote down what I could recall from the dream and refined it over the course of a few days.” That song about grief and loss is slated for inclusion in the collection.

Darryl Neustaedter Barg of Winnipeg highlighted the deep and collegial relationships among committee members and the ways they have worked together well amid different personal preferences: “We all genuinely like and respect each other, and that has made our process work well. It is hard to imagine not meeting every few months.”

At the first meeting in September 2016, Kauffman invited the committee to adopt a process that would value relationships above specific decisions. That has guided the group throughout its work. Committee members thanked Kauffman for his wisdom and direction, and the ways he modelled a healthy give-and-take for the team.

“Our final meeting was one of those mountaintop experiences that can leave a person transformed forever,” said Paul Dueck of Winnipeg. “I will forever be grateful for the privilege of being part of this journey with colleagues whom I now call friends.”

“I was able to experience not only the committee’s brilliant musicianship, but the deep faith and devotion that each member brings to this holy and monumental task,” said Doug Klassen, executive minister of Mennonite Church Canada, who participated in the first two days of the final meeting. “At many points my voice wavered as I was overcome with mystery and wonder.”

“This is an incredible volunteer effort,” said Amy Gingerich, executive director of MennoMedia. “Their dedication to the church through this project will bless all of us in years and decades to come.”

Voices Together will be published next fall by MennoMedia. To learn more, visit VoicesTogetherHymnal.org.

Related stories:
Voices Together hymnal discounts extended
A farewell to the 'blue hymnal'
The purpose and joy of congregational singing
Come to the table
Is there such a thing as a Mennonite song? 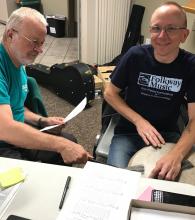 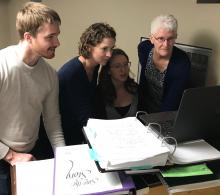 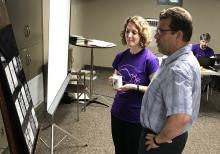 Sarah Johnson and Doug Klassen discuss the visual art that will be part of Voices Together.