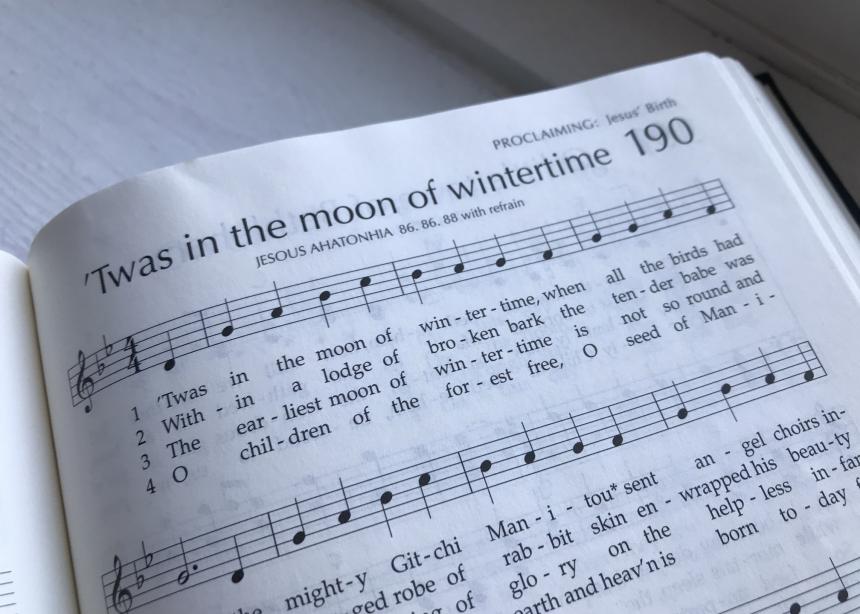 Choosing whether or not to include a song in Voices Together is more complicated than whether or not people like singing it. The song known as “Huron Carol” or “’Twas in the moon of wintertime” is one example of a beloved song that raises difficult questions.

To assess songs in recent Mennonite denominational collections, including Hymnal: A Worship Book, the Mennonite Worship and Song Committee has studied heart song surveys, heard stories from congregations and individuals, and considered a balance of themes and topics needed for well-rounded worship. In addition to these worship considerations, we also take into account the historical development and use of songs. For a variety of reasons, the committee, in consultation with a group of people convened to discuss material with connections to Indigenous communities, has decided not to include the song “’Twas in the moon of wintertime” in the new hymnal. This article attempts to explain some of the many complex issues surrounding this decision.

The tune of “’Twas in the moon of wintertime” is from a 16th-century French Christmas carol called “Une Jeune Pucelle.” In the 1600s a Jesuit priest in Quebec wrote a text in the Wendat language to tell the Christmas story in words and images that would be familiar to Indigenous people there. That Wendat text uses terms that literally mean “sky people” for angels, “elders” as magi, and “Tichion” as the name of the star. It says the visitors “greased his scalp many times” to show reverence. A full literal translation can be found here. Much later, the Wendat text was translated to French and English in ways that changed the meaning significantly.

Indigenous people today approach this song in different ways. Some sing it in its original language as a connection to the past, while others avoid it because of its associations with stolen and misunderstood cultures. Keshia Littlebear-Cetrone, a Voices Together consultant on Indigenous material, said she felt this song was asking her to be Christian instead of Indigenous, rather than celebrating the co-existence of two identities.

Another member of this consultant group, Geraldine Balzer, reflects on this song (in the following bold text):

I’m not sure when I first heard The Huron Carol, but I remember being enchanted by this carol that was so different from everything else in our repertoire. It wasn’t the tried and true carols of our hymnbook nor was it the popular Christmas tunes played on the radio. There was something about the melody that was haunting, and the words captured the imagination of this prairie girl. The moon of wintertime was a familiar sight, reflecting off the snow, creating an other worldly light in the crisp silence. The detailing of the bark wigwam and the baby wrapped in rabbit skins echoed the images shown in our social studies classes as we studied North American Indigenous tribes. In my imagination, this is what Christmas could have looked like had Jesus been born in Canada. For many years, this was one of my favourite Christmas carols, and obviously a favourite of many Canadians. I did a quick search and discovered it on six of my Christmas albums, all performed by Canadian artists.

The Huron Carol became a staple in the churches I attended, reflecting an increased awareness of the Eurocentrism of the church and the need to be more inclusive of the diversity, and was included in 1992's Hymnal: A Worship Book. But over the last 10 years, I have become increasingly uncomfortable with the lyrics of this carol, and while the melody still draws me in, I can no longer sing these words. I spent 14 years of my adult life as a teacher in Inuit communities in the Canadian Arctic and became increasingly aware of the harm colonialism brought to Indigenous people in the Americas and the role the church played in the colonial project. While I understood the missionaries’ need to tell the gospel story in metaphors that made sense to the people they worshipped with, I did not understand the destruction of culture that came with the Christian message—for too many people, the gospel was not good news. The Canadian Truth and Reconciliation hearings exposed the deep hurts inflicted by the residential school system, most church run, and increased my unease with the carol.

My unease echoes the unease of many and a quick google search reveals the musings of others that choose not to sing this carol as well as those who defend its inclusion. Ultimately, there are three reasons that I believe The Huron Carol in its current form should no longer be part of our hymnody.

First, the carol as we know it is not the song Father de Brebeuf wrote circa 1642, as church historians have speculated, as a gift for the Wendat people. The original lyrics were translated into French at the end of the 19th century, and then translated into English thirty years later. Each subsequent translation built on Euro-Canada’s imaginary of Indigenous people, shifting the carol from a theological explanation of the birth of Christ using the spiritual language of the Wendat to a romanticized retelling of the nativity. Middleton’s English lyrics are one more example of the image of the noble savage, casting Indigenous peoples as innocent children of the forest. Middleton’s description juxtaposes the idyllic portrayal of a forest nativity with the images of ragged rabbitskin and broken bark, building on 19th century romantic stereotypes of Indigenous people as impoverished yet noble.

Secondly, it is that stereotypical picture of Indigenous people that I find problematic. Too often we seek the Christmas card nativity scene rather than probing the depth of the spiritual gift represented by the birth of Christ. Just as the politics of the original nativity haunt the original story, oppression by a greater political power, displacement, loss of land and agency, so too should colonialism haunt this retelling. Never, in my years of singing this carol did I know of the displacement and resettlement of the Wendat people, their loss of language, culture and tradition. I now have this knowledge.

In the aftermath of the Truth and Reconciliation hearings, I find it is no longer possible to ignore the harm Christianity, as a partner in colonization, wrought on Indigenous peoples. Where the carol promises that the “radiant boy” brings “beauty, peace, and joy” the reality has been abuse, strife, and sorrow for too many.

And thirdly, Middleton’s lyrics present a pan-Indigenous view of Canadian Indigenous people, using the Algonquin term, Gitchi Manitou, to describe God. Algonquin is another language family and another Indigenous group with no connection to the Wendat. Often within the colonial imaginary, customs, regalia, and sacred objects are assumed to be the same for all Indigenous groups, depriving them of their distinctness as cultural groups, with traditions that grew out of their relationship with land and place. As a result of a pan-Indigenous view of the world, agency and identity is lost, theology is tamed, and we are left with a pretty song.

I have no doubt that The Huron Carol will continue to be sung in churches and at Christmas gatherings across Canada, but I can no longer join it. I believe, in the aftermath of the Truth and Reconciliation hearings and the resulting calls to action, that the work of reconciliation begins with each of us, and for me, relinquishing a once favourite carol is one step on the journey.

The Mennonite Worship and Song Committee knows that Mennonite communities have different relationships to this song. The inclusion of “’Twas in the moon of wintertime” in Hymnal: A Worship Book allowed many people to explore new images and ideas. For some, this song is still a needed stretch of the theological imagination, while others find it an uncomfortable mismatch of cultures, and still others experience it as disrespectful of Indigenous peoples.

There is not simply one correct feeling about this song; it is not inherently and entirely respectful or disrespectful. However, as the committee held many factors in balance including extensive research, conversation with consultants, and robust discussion in committee meetings, we have decided there are enough reasons not to include it in Voices Together.

This is our best effort at this moment in time to take steps toward reconciliation with Indigenous communities, rooted in our commitment to pursuing the just peace we learn from Jesus.

We expect many people will be disappointed with this decision, and we hope that other material in Voices Together will serve some of the same purposes. The French melody will appear in Voices Together with a new text about care for creation, so congregations can still sing the tune. Writers and composers from Canada are well represented in Voices Together. There will be additional songs and worship resources from a diversity of Indigenous communities.

Already, Hymnal: A Worship Book includes songs that can be used to celebrate God’s presence and incarnation during Advent and Christmas seasons. “Ehane he’ama” from the Cheyenne community begins with the line “Father God, you are holy, you’re the First One.” The words “you’re the First One” are an English translation of a Cheyenne phrase—an image that does not appear in other hymns and that can broaden our collective language for God. The song continues with a call that resounds with Advent waiting: “Let your love come on down and touch your children here on earth … Jesus, we call you; watch over us.” Similarly striking is “Many and great,” translated from the Dakota language, which names God “O star-abiding One.” The second stanza prays: “Grant unto us communion with you, O star-abiding One. Come unto us and dwell with us,” which is an expansive appeal that can be sung throughout Advent and beyond.

Katie Graber is an ethnomusicologist who studies race and ethnicity in a variety of contexts including Mennonite music, American music and European opera. She has taught classes on Western music history and world music, and she accompanies Suzuki recitals and school choirs. She leads singing at her church in Columbus, Ohio, and chairs the Intercultural Worship committee for the Voices Together project.

Dr. Geraldine Balzer is an associate professor of curriculum studies in the College of Education at the University of Saskatchewan. Her experiences teaching Inuit students led to her interest in decolonizing pedagogies and transformative education. Her teaching focuses on ways of disrupting the hegemony of standard English and embracing the diversity of Englishes within our world, incorporating Aboriginal and postcolonial literature into secondary classrooms and preparing teachers to be advocates of social justice. She serves as Assistant Moderator of Mennonite Church Canada and works toward reconciliation and decolonization within the church.

Related stories:
Voices Together committee holds final meeting
A farewell to the 'blue hymnal'
Come to the table
Bringing diverse voices together
Is there such a thing as a Mennonite song? 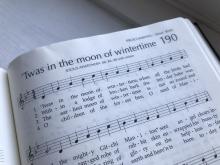