A farewell to the ‘blue hymnal’ 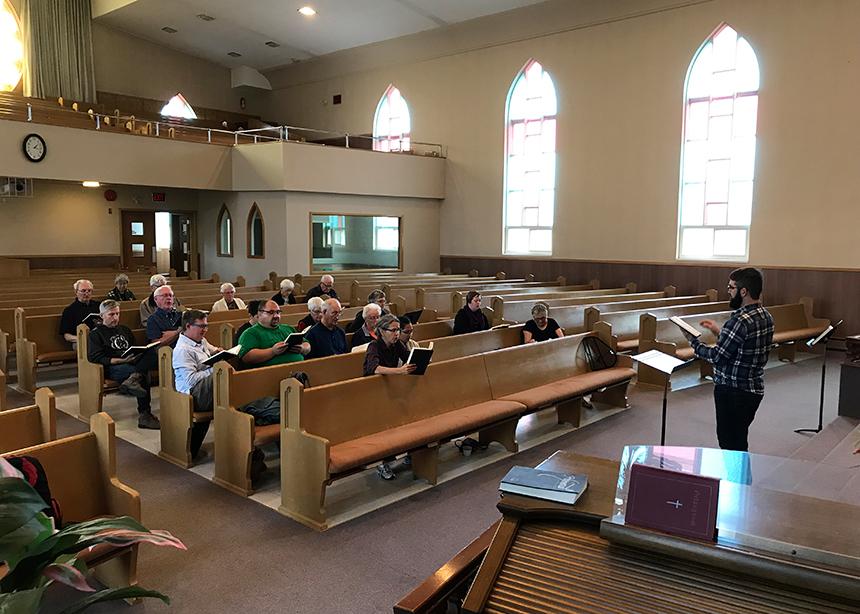 Over the span of a single weekend, Sean Goerzen sang or played every single hymn in the blue-backed Hymnal: A Worship Book. All 658 of them. “I feel like I know the hymnal in a very intimate way now,” he says with a laugh.

Goerzen organized Sargent Avenue Mennonite Church’s hymnal sing-a-thon, a two-day event to raise funds so the church can purchase copies of the new Mennonite worship and song resource, Voices Together, forthcoming in 2020.

Around 80 different people came and went over the 13-and-a-half hours of singing, split into four sessions on Sept. 27 and 28. About six people managed to sing every tune.

Church members cooked and served lunch and supper on Sept. 28 and set out donation baskets at the meals, raising about $800. Goerzen says this is an awesome start, although the new hymnals will probably cost more than $5,000.

Everyone from seven-month-old babies to people over 90 gathered at the church to participate. There were congregants from other Mennonite churches in Winnipeg and from Catholic, Lutheran and Anglican denominations, says Marla Langelotz, Sargent Avenue’s pastor. Even residents of Alberta, Saskatchewan, Ontario and Prince Edward Island joined in while visiting family and friends in the area.

“It’s cool. I didn’t expect that many people to know about it,” says Goerzen, who was surprised how far the word spread. An article in the Winnipeg Free Press, shares on Facebook and word of mouth helped draw attention to it.

Katie Neufeld, a long-time member of Sargent Avenue, was one of the dedicated singers who participated. She attended every session on Sept. 28 and returned the next morning to sing with the choir for worship. She wanted to be part of it because she has always liked singing and has sung in the choir for years. “And it’s sort of a celebration that we as a church are doing,” she says. “Music has been a very important part of our church always.”

Five song leaders and five accompanists, including Goerzen, took turns leading the diverse choir over the weekend. In order to get through the thick book, they sang only two verses of each hymn.

Goerzen, 26, grew up attending an Anglican church in Vernon, British Columbia. So when he moved to Winnipeg and started attending a Mennonite church, he didn’t know most of the hymns. Other than some Christmas and Easter songs, “the hymnody was very, very new to me,” he says.

His father did own a copy of the brown Mennonite Hymnal, which Goerzen paged through when he was a kid. But his love of hymns really flourished on his trips to southern Manitoba. “Whenever I came out to Altona to visit my grandparents, going to the Bergthaler Mennonite Church . . . , that’s actually where my interest really started,” he says. “I would’ve heard four-part singing there and I liked it a lot. I always did like going to that church.”

Singing every song in numerical order gave him new insight into the “blue book.” “You realize that there’s a whole arc,” he says. “I think we kind of just pick apart the hymnal, but to see it as one large thing was interesting . . . and it was just neat from a theological perspective.”

After several hours of singing, Neufeld’s voice started to give out, so sometimes she had to just sit back and listen. But she found that as she read the verses, the familiar hymns took on new meaning. “You read the words, and that sort of means more, because I don’t struggle with the notes and I can take in the meaning of the words,” she says. “There were a few songs as we sang that . . . grabbed me again, what the meaning of the song was.”

Darryl Neustaedter Barg, a member of the committee that curated the new song collection, did a short presentation during the last session of the weekend. About half of the songs in Hymnal: A Worship Book, which was published in 1992, and the two supplements, Sing the Journey and Sing the Story, that were published later, will be included in the new resource, he says.

Goerzen is excited for the new hymnal because it is going to leave behind unused hymns and bring back many of the German texts that were left out last time. He is also looking forward to new compositions by Mennonite composers.

“I think our singing of hymns is such a collective way to praise God,” he says. “Especially with hymn singing, you’re using your voices, there aren’t all sorts of instruments in the background. It’s very simple and I think it’s a very humble way to praise.”

Related stories:
The purpose and joy of congregational singing
Voices Together taking pre-orders, website redesign goes live
Come to the table
Bringing diverse voices together
Is there such a thing as a Mennonite song? 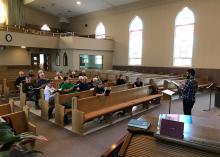 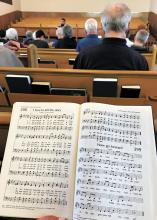 Singers sang all 658 hymns from Hymnal: A Worship Book and raised $800 to help Sargent Avenue Mennonite Church purchase copies of the new Voices Together hymnal. (Photo by Nicolien Klassen-Wiebe)

Aww, I'm saddened to hear that yet another Mennonite hymnal was retired. Sherbrooke (street) Mennonite always stuck to the old brown one. I hadn't heard of this change in 2019, as I was attending a Baptist church, and I guess it never came up among my friends from Sherbrooke.