But then there’s those snakes 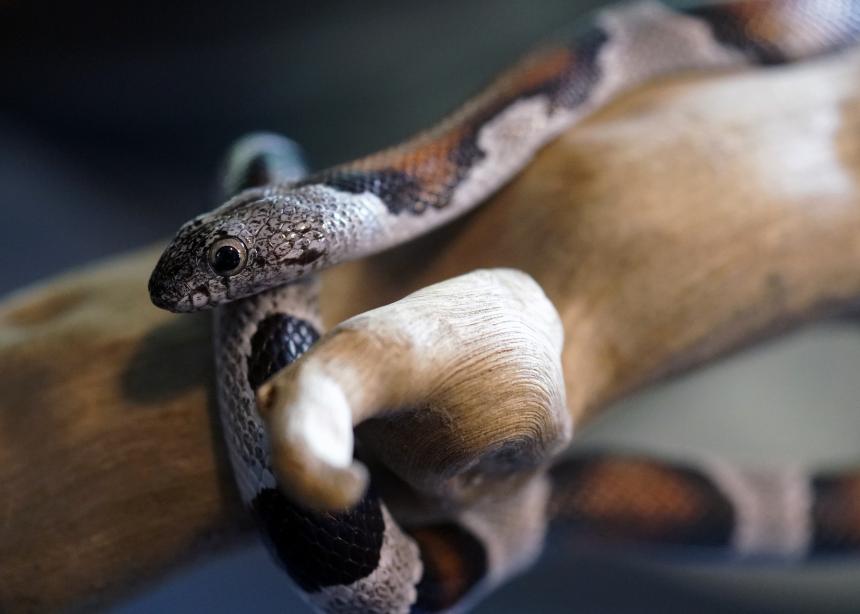 Our lives—Holly’s and mine, that is—changed to a significant degree. Our oldest granddaughter, Maeve, who is 19, has moved into our home. Maeve comes to us from Ontario, where she left her family behind to begin the next portion of her life.

And it is good. Maeve is interesting, passionate, stubborn and opinionated. Yes, she has all the important family genes. She is also gifted in many areas. She is searching for the employment opportunity that can allow her to develop those gifts.

Maeve also comes with a menagerie. That involves multiple snakes, a lizard and a cat. Several weeks ago, we travelled to Regina to claim a rescue dog. Our house now pretty much breathes in and out.

Keep in mind that, until this summer, I have never lived in a house where there are non-human beings. Now, I’ve become a minority. I feel relief when I’m fed.

My father loved his cows and delighted in walking through his herd, speaking to them by name. But then, Pa also attributed emotions to his tractors. I remember him coming in late from the field, commenting, “The WD-9 was sure feeling good tonight.”

The new dog is Bran, a little over a year old, with a border collie profile to him. The story we were told was that he was captured as a stray with a snout full of porcupine quills. Dealing with that was almost fatal, but Bran is now in good health.

On his first full day here, I decided that Bran would join me on my hour-long walk in the country. I kept him leashed, and he loved being out in the fields. By the second day, he was off the leash once we got out of the village, and the giggling began.

Bran has this thing when we’re walking the backroads. He runs ahead, flattens himself in the road, the field and the hay in the ditch, and convinces himself that I can’t see him, then suddenly leaps up and charges toward me. I’m told that dogs do not possess facial muscles that allow them to grin, but when Bran lunges toward me, tongue and tail flapping behind, I am seeing joy in his features.

Not so much on Holly’s features, perhaps, when the dust of the road and fields are deposited on the floor.

The walking regimen may need some variation, as last week Bran found something really dead and really smelly to roll in, so, with Maeve taking the lead, I participated in my first dog bath.

As an energetic youngster, Bran also loves to play games in the house. With me, that often involves chewing on my arm, and I’m intrigued, just after I jerk away, how those powerful jaws that can destroy most toys can stop just before I begin to bleed. How does Bran know that? Why does he care?

Maeve, however, with something of a “whisperer” in her, teaches Bran commands in a quiet voice. When he brings her a ball, he drops it at her feet and then sits patiently for her command. For me, the ball is hidden between his paws, and he gnaws on me when I reach for it.

I’ve decided that there are lessons of God in the nature of this beast that has claimed a space in our lives and our emotions. Bran’s willingness to trust, to give and receive affection, to adjust quickly to the rhythm of the household, to offer the same faithfulness and trust on each day, no matter how our lives and emotions are unfolding that day, those have lessons to teach me about the perfection of God’s creation. He gives without expecting, except for when it’s time, with some urgency, to head outside.

Perhaps the lessons of God perfection, God’s faithfulness, can be learned from every piece of God’s creation.

But then there’s those snakes.

Read more In the Image columns:
The benefits of a hamlet
The pack of smokes on my mantel
A pretty big leap for Arthur
A sign of the presence of God
Saying goodbye, then hello again