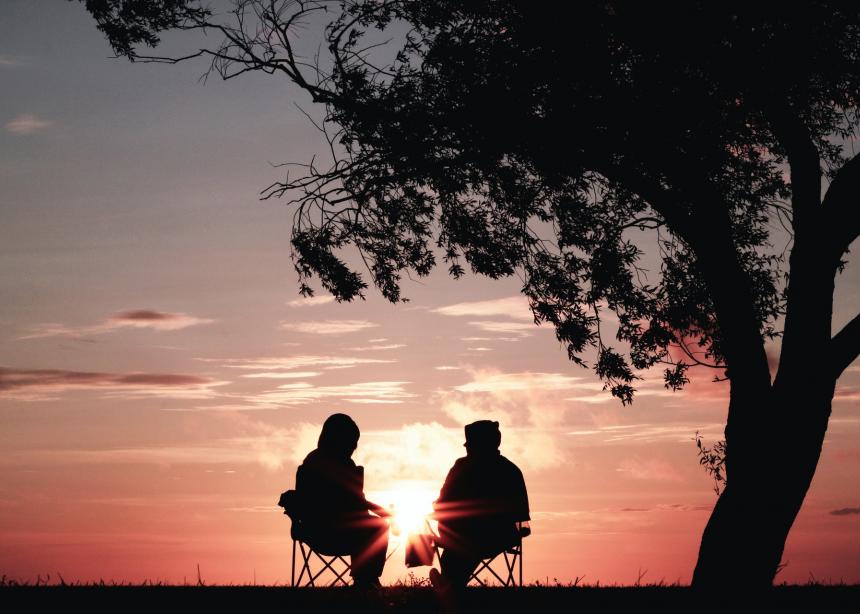 I visited an elderly friend in a small-town hospital. Gaining permission to see “Esther” (all names are pseudonyms) involved a slight untruth, but it was merely a sin of omission, as I simply withheld “retired” when I identified myself as her minister. I slept reasonably well that night.

Esther had fallen and experienced an awkward break. For the first number of days, pain control had involved morphine. This had caused some distress, yet we were able to giggle as she recounted some of her wilder hallucinations. She also accused me of stopping by a day earlier, but I pointed out that was a morphine mirage as well.

In the other bed in Esther’s room, I recognized another old friend. As I stepped up to greet “Maria,” her eyes opened wide. I realized that she didn’t recognize my masked visage. Once identity was established, the warm chatting went all around the room.

My relationship with Esther is such that teasing is comfortable. She asked me to call a nurse as she wanted to be moved from her sitting position to reclining on her bed. I assured her that I had the strength to wrestle her down, and her eyes sharpened, as I knew they would. “Don’t you touch me!” Esther has a spicy streak.

While the staff ministered to her, I stepped back over to Maria’s bed, and we reminisced about family and about her current health situation. Soon, Maria, with typical passion, was telling me, “People are so good to me! God always puts people around me when I need them! And I am so blessed to have people who care about me, who look after me!”

By this time, Esther was lying down, without my assistance. I could see that she was near to dozing. We prayed together, then I got up to go. But she stopped me, as she had one more thought to share: “You know, I am so lucky! I have so many people around me that care about me. My children are so good to me, my friends make times like this easier. Everywhere people step up to help me! There is such good staff here! I am so lucky!”

I left that room on a high. Two women, one in her 80s, one in her 90s, had just offered me a precious gift. It was the strong affirmation that life, in all its stages, is good.

One of the most important aspects of healthy spirituality is the preparation for dying. My two friends, although their deaths aren’t particularly imminent, taught me a lesson on how to live, on how to be. My ministerial role has invited me into many dying realities, and every one has been an honour. Who am I to share the wonder, the awe, the often painful reality, of death? The measure of how a person has prepared for this inevitable event becomes a measure of their spirituality.

I recall a time when I was asked to visit a man who was in the active process of dying. He was able to say the things that were closest to his heart. He acknowledged his torment, as he named children and grandchildren who had not yet “come to know the Lord.” I gave him what assurances I could about the loving nature of God, as revealed to me, but as I left that conversation I experienced a strong wave of anger toward whatever spiritual structure had convinced him of the doom of his loved ones. This heaviness is not a spirituality of hope.

Sit with Esther. Sit with Maria. As they age, as their physical bodies become less able, listen to them process that reality. Hear them as they discover new lessons, new pinpoints of light. Hear them give thanks for the blessings they discover. Share their awe, as they fully experience life in its complicated beauty.

Ed Olfert (p2peho@gmail.com) gives thanks for lives well lived and for stories shared.

Read more In the Image columns:
We are now family
‘Our framing story’
The kingdom of heaven now
'Touch the hem of her cloak'
Two ‘rough’ men and a gravel hauler