‘Bring your best self’ 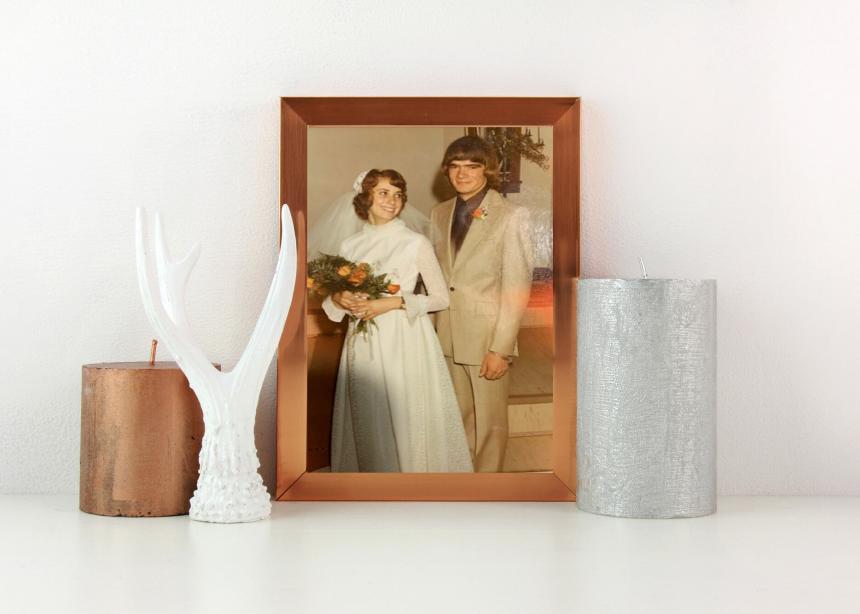 Holly and Ed Olfert on their wedding day in 1972. (Photo illustration)

In the final days of October, Holly and I reached an anniversary.

Recently a relative reminded us that, in 1972, five cousins headed to five altars with their partners. Marie, a widow, pointed out that Holly and I would be the only ones to reach the 50-year milestone.

In my years of pre-marriage conversations as a minister, Holly and I frequently talked about the reality of getting through difficult times and conversations. Sometimes, as we described those days, the response would be, “So why did you stay together?” The only answer that slid to my tongue immediately is, “We didn’t know we had a choice.”

Certainly we knew, and know, that there is a choice. But we were also supported by the models held out to us by parents and grandparents, the affirmation that vows matter. Commitment matters. We were well served by an innate sense that this relationship could not be taken for granted but needed to be cradled in respectful palms.

I’m embarrassed by how many years it took me to learn that when Holly shared something that was troubling her, was confusing her, was making her life hard, it wasn’t at all useful to simply offer solutions like, “Well, try this. Just do that.” She was looking for soul support, someone who could hear her hard story and return empathy, but I stepped into my maleness and provided answers.

We had children quickly. In the exhaustion of those early parenting years, we were mostly on the same page, trying to create the best environment for our cherubs. Mistakes were frequent, though, as we were still trying to figure out who we were, individually and as a couple. But our common determination to parent well guided us in mostly sane directions.

Then, as the cherubs grew and began leaving the nest, we looked at each other and wondered: Who will we be now? There were still many years ahead.

Through those years, I was developing a sense of my identity at a spiritual level. “What will make my life good?” That search began to evolve into a spirituality of “awe.” A search for “awe.” A determination to name “awe.”

That search kick-started the reformation of my relationship to Holly. I acknowledged, to myself and to her, that she could have chosen any one of the millions of better options: better looking, better provider, better parenting, better listener, better everything.

But she chose me.

The aura of awe extended to viewing her gifts in new and exciting ways, the huge areas of life where she was far beyond me, had much to teach me. That awe extended to the simple and yet hard lesson of loyalty and faithfulness. I could count on her. As I identified and pursued new paths that seemed good to me, she created space for me to explore those paths, even when that meant separation from family and familiar places.

Awe continues to create my lens. I marvel at our children, the important stories of their lives. They have chosen partners that bring remarkable colour and variety. They have produced a new generation that again offers hope to the world through their kind and energetic presence. The future will be good.

Twenty years ago, I realized that depression is part of who I am. I offer my regret and apology to all who bore/bear the brunt of that. Mostly that is Holly, but not exclusively so. The pursuit of finding good supports for that condition now is part of the awe of my life, the conversations that I have, the wonder of possibilities yet ahead.

Give it a shot. Bring your best self.

Read more In the Image columns:
Modelling another way to healing
A tale of two clans
An undefended spirit
‘The George and Helens’
The church and mental illness

Holly and Ed Olfert on their wedding day in 1972. (Photo illustration)