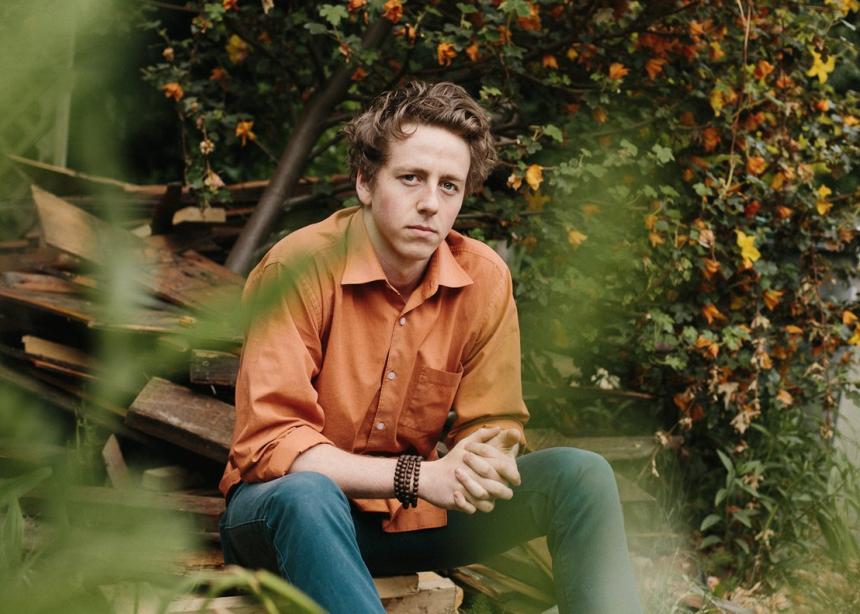 Almost two years after he started recording it, Kuri has released his new album. Titled No Village, the 10-song collection came out today via Nevado Records.

No Village is the follow-up to Human Nature, an EP the Abbotsford, B.C. musician—born Scott Currie—released at the end of 2016. (Nevado Records reissued the EP last October.) It’s also Currie’s first full-length since the dissolution of his previous project, Oh Village, a band he played in with Matthew Jake Janzen, David Dueckman and Stephen Dahl.

As with Human Nature, piano, guitar, bass and drums form the bedrock of the songs on No Village. Currie fills in the arrangements with lush strings, rich vocal harmonies and his alluring lead vocals. It’s a sound that has earned him comparisons to Sigur Rós and Thom Yorke.

Currie started recording the album in July 2017 with engineer John Raham at Afterlife Studio in Vancouver, and completed it over a few sessions that took place sporadically during the last half of that year.

“It’s been a really long process,” Currie says. “I was originally hoping to release it in fall 2017, or January 2018 would’ve been nice. But, you know, things get pushed around a little bit and you want to give it the space it needs to go out there well.”

Canadian Mennonite caught up with the 24-year-old earlier this week via Skype to discuss No Village.

Other than the string parts, did you play everything on No Village?

SC: Most of it was me. Matt [Janzen] played some oboe and a bit of guitar. Dave [Dueckman] tracked a lot of the bass—we wanted to save time, so we recorded bass and drums at the same time. Once I had Dave and Matt on the record, I knew I wanted to include Steve [Dahl], so I was like, “Steve, come play one marimba part.” So he played two little marimba things. Considering I was calling the record No Village, I figured it’d be funny to have them all on the record. I also had Jenny Banai and Natalie Bates sing some harmonies, and I had a French horn player named Holly Bryan.

Did you title the album No Village purely because it’s a play on Oh Village, or do you think the title speaks to some of the themes on the album?

SC: It’s definitely 100 percent both. We had originally said it as a joke, so I had made that the working title, and then I realized very much what the record was. The themes on the album are a sense of being alone in a place that’s familiar to you. It’s sort of like, you enter into your head for awhile, and life kind of unravels or changes and then you come out of your head and you realize you’re in the exact same place... [but] all of a sudden you’re confronted with the fact that you don’t feel at home where you are. You feel pulled in different directions and there’s no sense of direct belonging in front of you. That was really prominent on the themes of the record. So what started as a joke turned into a very pointed title for the whole thing. I also like it because it’s only a joke if you know Oh Village, and most people don’t know Oh Village.

The cover art goes so well with the title. Such a desolate image.

SC: Yeah. I was living for the last year and a half with Matt and his wife, and that’s our backyard. I borrowed my friend’s camera, went into the backyard and took one picture. Again, that’s my home, but it’s a very eerie, unnerving photo with this real glow that doesn’t seem right.

Do you have a favourite song on the album?

You grew up at Emmanuel Mennonite Church in Abbotsford. What can you tell me about your relationship to the Mennonite faith and/or culture these days?

SC: Without going to Emmanuel Mennonite Church, I wouldn’t be doing what I’m doing at this point. I owe a great deal to my Mennonite upbringing in terms of being kind of thrust into music. It was a pretty small church and they needed musicians, so they were like, “You’re going to drum now,” and I said “Okay,” and then they said, “Now you’re going to sing,” so I sang. Everyone else around my age in that church was in bands and making music, and a lot of them still are, so it was just very easy to feel like music was not only fun to do with all the people around me, but of immense importance and spiritual value, which I maintain today. I don’t necessarily interact with Mennonite culture as much these days. I’m not attending a Mennonite church, really. I still have close connections to Emmanuel Mennonite and a lot of my good friends are still there.

In between recording sessions for No Village, you toured Europe and parts of North America as the drummer in Jordan Klassen’s band. What was that experience like?

SC: It was really fun. It was a really beneficial experience for me to see what coordinating and executing a large-scale tour actually looked like. Now he’s a close friend. We do songwriting together sometimes for film stuff, and it’s always been great to work with him. I did a bunch of the drums for his new record, which was really fun. I love playing drums for him.

You’re heading to Japan later this month for 13 shows. How did that come about?

SC: I got a text one day from my label and they were like, “Hey, want to tour Japan? LOL,” (laughs) and I was like, “Yeah. LOL.” Nick [Bernal, founder and president of Nevado Records] has a friend who has a record label in Japan, so they’re releasing the record in Japan and we’re doing a whole tour out there.

What’s up after you get home from Japan?

SC: We have a few other tours booked. I don’t know if I can say too much about them at this point, they’re kind of still in the works, but we do have quite a bit of travel planned for this year. I’m also going to start tracking my next record, which will hopefully be out in less than two years (laughs). I have few other creative endeavours I want to get started on too, some of them musical and some of them not as musical, so 2019 is kind of a fun year. Very hectic, very bizarre, but super fun.

This interview has been edited for length and clarity. Visit kurimusic.com.

Further reading:
No village
Climbing toward a greater unknown
Watch: "77-76" by Royal Canoe
Ten years after 'Points of View'