Ten years after ‘Points of View’ 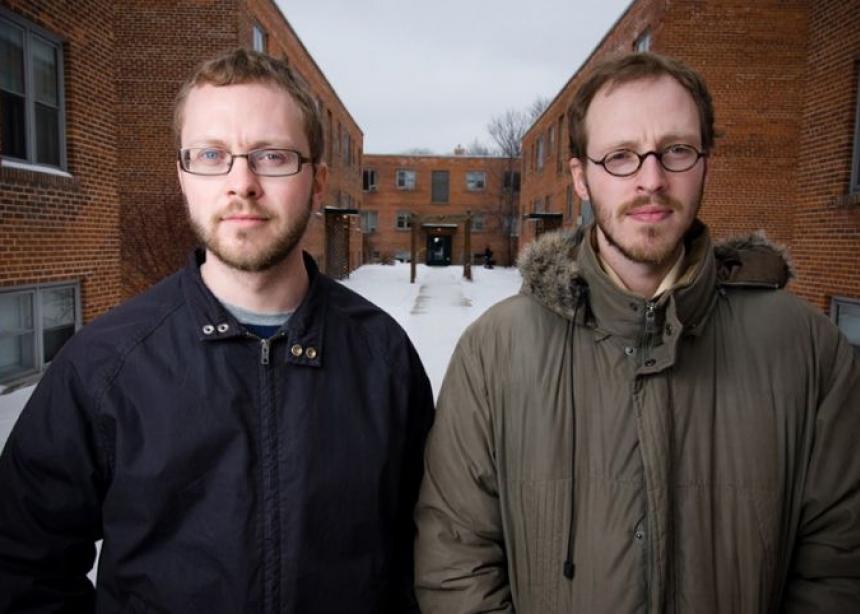 On April 3, 2009, southern Manitoba-based folk group the Other Brothers released Points of View. Recorded in the studio at Mennonite Church Manitoba, the album earned critical acclaim—CBC dubbed them “the Simon and Garfunkel of the Prairies”—and a small but loyal following.

Made up at the time of Chris Neufeld and Donovan Giesbrecht, the group’s music focused on vocal harmonies and acoustic guitars, augmented by the pedal steel playing of Bill Western and the occasional banjo line and guest vocal.

Today, Neufeld, 42, is a teacher in Winnipeg, Man. Giesbrecht, 41, lives 90 minutes away near Morden, Man., where he is the principal at a nearby school.

On the eve of spring break, with the sound of Giesbrecht’s children playing in the background, Canadian Mennonite caught up with the duo via a conference call to ask them how they feel about Points of View, 10 years after its release.

When you look back on the writing, recording and release of Points of View, what sticks out for you?

Chris Neufeld: We went into it wanting it to remain pretty casual—make sure we don’t layer it too much, just let the songs breathe and not be too picky about making it perfect. But once we got in the studio, we realized we wanted it to be as good as we could make it. There was a sense that we were proud of this thing and we wanted to do it right.

Donovan Giesbrecht: What I remember is just fun. You know how your friendships are kind of built around activities? Like, you go on a canoe trip or you play hockey with your friends? I felt like being in the studio with Chris and Bill [Western] was a special kind of friendship moment. I came out of there feeling like, wow, that was rich time.

CN: I love all of Don’s songs, but I’d have to say “Progress” is my favourite of his. First of all, just Don’s fluid picking—which comes through in a lot of songs, but in that song in particular—and those beautiful, open chords. [Lyrically], I’ve always admired and envied Don’s ability to capture a simple and relatable narrative, and that song is really the epitome of that. It’s clear what it is [about]; you’re saddened by the plight of the family farm in that song. Not that I can directly relate—I’m the city boy of the group—but there’s a humanity to it, and it makes you think about it, and it’s just so successful in that way. If I had to pick one of my own songs, I think I’d pick the title track, “Points of View.” First of all, it made me think about how well Mike [Petkau Falk, the album’s engineer and co-producer] did in capturing those acoustic guitars. And, I kind of like the guitar part—that simple part that became key to the arrangement, that little hammering on and off melody thing. I don’t feel like lyrics are a strength of mine, but I like some of the lines in that song, even 10 years later. So, that makes me feel willing to say I’m kinda proud of that one.

DG: My favourite Chris song is still “Sleep in the Sunshine.” I’ve always liked that one.

CN: We used to feel like that was the most successful Other Brothers song. That [song sounds] the closest to what we wanted to do when we got together.

DG: Yeah. Two people fingerpicking, singing harmonies that aren’t obvious. We wanted it to feel like you didn’t know who was singing melody and who was singing harmony, that both parts would be interesting. We wouldn’t just follow in fifths and thirds. I feel like we did that on that one. I enjoyed performing it so much. I love the lyrics too, I thought there was lots to think about. The thing I like about Chris’ songs is they let you wonder a bit more about what they’re about, whereas I always felt like I explained my songs for the listener. There’s more to just sit and think on in “Sleep in the Sunshine.” For my songs, I’d probably say the last one, “Forever Wrong,” is my favourite. You know that idea that the best notes are the ones you don’t play? I feel like I’m always tempted to play too many notes, and on that one, it feels like there’s lots of space there. It’s simple. I was maybe a little less preachy than on my other [songs], and I like that there’s space.

One of the songs that most sticks out for me on the album is “Second Wind.” It’s a dark, haunting song, but it’s ultimately uplifting, with lines like, “I was down for the count, I had lost my breath / When a warm, gentle breeze woke me from my death.” Donovan, what can you tell me about that one?

DG: There was a story on CBC Radio and they were interviewing this woman about life-changing moments. [That led to the lyric, “Ashley Keith, she was only 16, but she drank ‘til her guts would bleed.”] I don’t know how I got to all of the other stuff, but that was the start of it: a CBC documentary about this woman who was just so down and out—alcohol and drugs and everything—and then had this life-changing moment. In our language growing up, [we would describe it as] that kind of salvation moment, but she wasn't using those terms. Anyway, that idea that life can go from so bad to good, that was the start—with something that was almost secular salvation.

Another song that sticks out for me is “Okay.” It’s the longest song on the album, and in terms of arrangement and production, the most ambitious. The build-up of vocals and pedal steel lines in the middle section, which resolve in a wash of harmonies that recall the Beach Boys, is stunning. Chris, was that all part of your vision when you wrote the song, or did it come together that way in the studio?

CN: Definitely more the latter. We recognized, based on the structure of the song and the chords at the end, that it lent itself to potentially building somewhere. I can remember us working that out in the studio at the time, figuring out where we were going to layer it, how we could build it and build it to try to make it bigger and bigger. It was the one moment of the record where there was that sort of intensity. I heard it again yesterday for the first time in a while and I kind of like how the arrangement builds and then, when those “oohs” come in, it’s like this release of tension.

In the years following Points of View, you added Bill Western as an official member to the band and in 2014, you released a second album, Everything Can Change. Are you still writing songs? Any plans to record and release more music?

CN: Don and I haven’t really been playing for quite a while now. I don’t know if the door is closed. I hope not. But I’m proud of the fact that we did something really different on those first two records… I like the idea of doing [another record] at some point, but no plans right now.

DG: There’s an hour-and-a-half drive between us if we want to practice. If it wasn’t for that, we’d be playing all the time. I have to convince Chris to move to a village out here. Once he moves to Chortitz or Schoenwiese, then we’re back on.

This interview has been edited for length and clarity. Points of View is available to stream, or to download on a pay-what-you-want basis, at otherbrothers.bandcamp.com.

Such talent and humility! A rare combination.