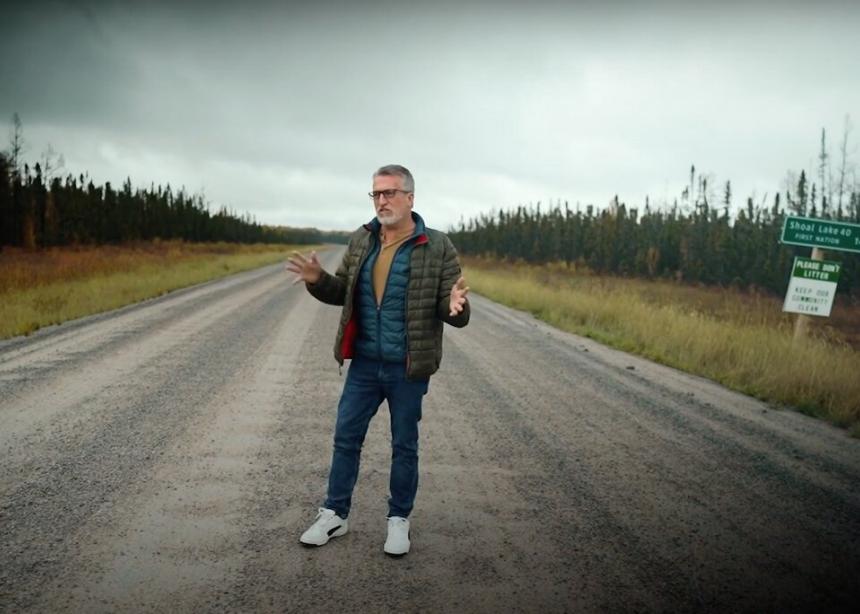 In a new video, musician Steve Bell gives viewers a tour of Freedom Road and shows them the impact the road has had on Shoal Lake 40 First Nation.

Shoal Lake 40 is on a peninsula but construction in 1919 of the aqueduct that carries water from Shoal Lake to Winnipeg cut the community off from the mainland, effectively making it into an island. The First Nation was left without a water treatment facility and, from 1997 until 2021, it was under a boil water advisory.

Construction on the road began in 2017 after decades of hard work and tireless advocacy. Churches for Freedom Road, a campaign that Bell helped create, invited churches to show their support for the initiative. Many Manitoba Mennonites signed on.

Freedom Road was completed in 2019, under budget and ahead of schedule. Since then, Bell explains, it has had a radical impact on the community.

“With the completion of the road came a whole other domino effect that has since led to the construction of a beautiful new school, Kindergarten to Grade 7, and a state-of-the-art water treatment plant that opened Sept. 15… which now delivers safe drinking water to every home in the community,” Bell says.

“There are adults there who have never drunk water out of their taps and now can,” Bell continues. “And this is all a remarkable testament to the successes made possible through partnerships that support Indigenous-led solutions.”

Bell’s update, which is taken from his Oct. 22 “Loft Sessions” video, concludes with him playing “Freedom Road,” an instrumental song that appears on his 2016 album, Where the Good Way Lies.

Bell’s most recent album, Wouldn’t You Love to Know?, was released in late 2020. Last month, he was one of 12 Manitobans invested by Lt.-Gov. Janice Filmon into the Order of Manitoba. The Order of Manitoba honours people who have enriched the social, cultural or economic well-being of the province and its residents.

In a new video, musician Steve Bell gives viewers a tour of Freedom Road and shows them the impact the road has had on Shoal Lake 40 First Nation.