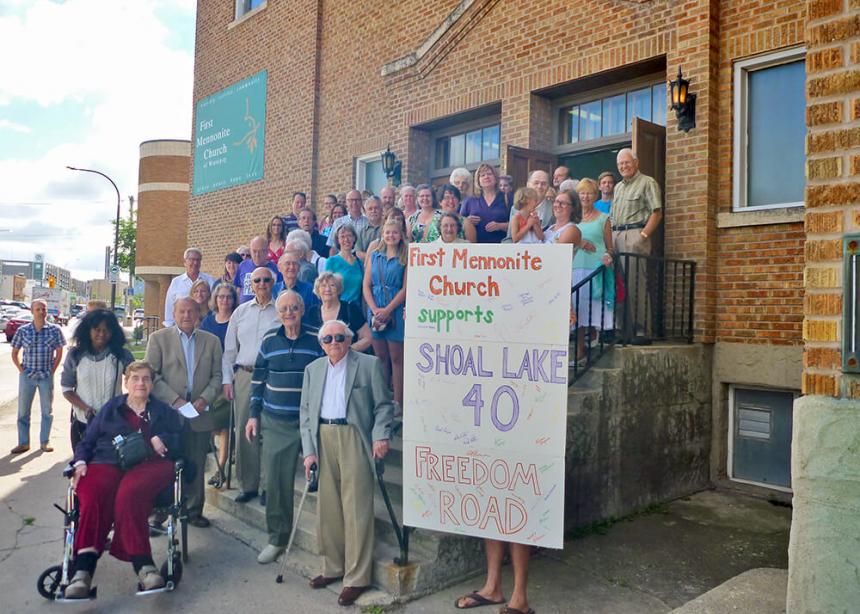 A campaign of church signs supported by Juno-award-winning musician Steve Bell is calling on the federal government to address the longstanding injustice of Winnipeg’s water system.

In August 2015 Bell joined the chorus of voices asking the federal government to do its part in building a road that would connect the isolated community of Shoal Lake 40 with the Trans-Canada Highway.

“It’s the right thing to do,” said Bell on August 7, the day after he visited the community of Shoal Lake 40. “It’s kind of a no-brainer. I was looking for an Achilles heel and I couldn’t find one. This was a fully self-sufficient community for thousands of years and suddenly it was artificially isolated and became dependent… All they’re asking for is a road so they can get jobs in Kenora, so they can get access to essential services, so their kids don’t have to be billeted all winter long to go to school, so if someone has an asthma attack they can just drive to the hospital.”

The city of Winnipeg pipes all its water from Shoal Lake, which straddles the Manitoba Ontario border about 150 kilometres east of Winnipeg. When city engineers built the aqueduct and water intake system in the early 1900s they turned Shoal Lake 40—a First Nations community of about 200 people—into a man-made island. The isolation has brought a century of heartache to Shoal Lake 40. A ferry connects the community to the mainland during the summer, but during freeze-up and thaw in the fall and spring, the thin ice is treacherous. Several people have died trying to make the crossing.

Shoal Lake 40 is under a boil-water advisory and has to import all its own drinking water in bottles. A water treatment plant was designed but never built because of the cost of transporting building materials to the island.

The First Nation used to sustain itself, but the development of the water intake system affected fish migration patterns and the First Nation’s access to wild rice harvest. In the 1970s and ’80s the Ontario Ministry of Natural Resources introduced quotas and shut down the local walleye fishery. The city of Winnipeg, worried about increased traffic on the lake, also blocked the First Nation’s bid to lease cottage lots on the lake.

“Everything they’ve done to try to do some economic development on their own has been thwarted,” said Bell.

For years, the community of Shoal Lake 40 has been asking for one simple thing: a pair of bridges and an all-weather road—dubbed Freedom Road—that would connect the island to the Trans-Canada Highway only 27 kilometres away. The project would cost about $30 million, split between three levels of government. The city of Winnipeg and the province of Manitoba have each committed $10 million. Only the federal government is still holding out. In June, Greg Rickford, the federal Minister for Natural Resources, visited Shoal Lake 40 but left the community in tears after declining to commit federal funds to the project.

It was a photo in the Winnipeg Free Press of children weeping after Rickford’s visit that moved Bell to get involved. “I saw this picture of this elder and these children huddled, trying to ward off hopelessness and something inside me snapped,” he said.

After Bell was interviewed by local media about the campaign, he got a call from his member of parliament, Conservative MP Joy Smith. She said she supported the campaign and wanted to visit Shoal Lake 40 herself.

On August 10 Smith held a press conference with Bell in which she called on her own government to commit to building Freedom Road.

At first it seemed the government was moved. Minister Greg Rickford responded, saying he supports Freedom Road “in principle.” But although the federal government has contributed $1 million to the design study that’s currently underway, so far they haven’t committed to their third of the construction project. Both Justin Trudeau and Thomas Mulcair have said their governments, if elected, would provide the final $10 million to build the road.

Shoal Lake 40 is completing the design for the road. They’ll be ready to start construction in January, should the funds materialize.

“We’ll be monitoring and we’ll get noisy if necessary,” said Bell. He’s collecting signatures on a petition to Rickford at https://community.sumofus.org/petitions/road-to-reconciliation-provide-a... 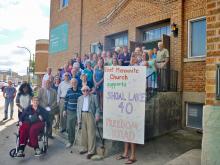 Erwin Redsky, chief of Shoal Lake 40, left, tells the story of his community to Steve Bell and Joy Smith. (Photo by Amy Knight)