Watch: “Rainmaker” by Upside of Maybe 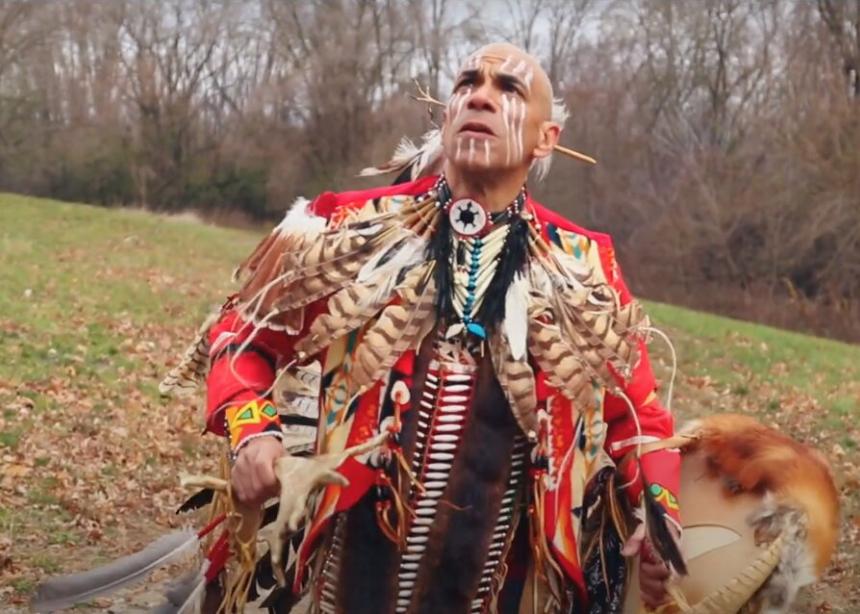 Gerard (Abouyou) Roberts from the Indigenous worship band Okama dances in the video for “Rainmaker.”

Stratford, Ont.-based rock band Upside of Maybe released its latest music video at the beginning of January, but it took on new resonance in May upon the confirmation of more than 200 unmarked graves at the Kamloops Indian Residential School in B.C.

Written by Upside of Maybe singer-guitarist Michael Bannerman, and performed with members of the Indigenous worship band Okama, “Rainmaker” deals with the wrongs perpetrated against Indigenous peoples by white settlers. The video depicts a priest abusing an Indigenous student at a residential school.

Bannerman, who is a member at Avon Mennonite Church, works in the mental health field. He was inspired to write the song after taking some professional development courses relating to Indigenous peoples’ experiences with the residential school system.

For Bannerman, writing and recording the song was a way to acknowledge colonialism.

“It’s really easy for us to say, ‘I didn’t do that, I wasn’t there, I didn’t push some kid into a residential school,’” he says. “I needed to personally take ownership of what [white settlers have] been responsible for.”

At the end of the video, the Indigenous child—now an adult—visits the priest who once tormented him and embraces him in an apparent gesture of forgiveness.

Bannerman says that as white people, he and his bandmates thought long and hard about that ending.

“On the one hand, it’s a nice, [warm and] fuzzy bookend to the situation, but we’re not saying this is how [every conflict] needs to end,” he says. “Reconciliation doesn’t always look like an embrace.”

“The idea was to put this video out and ask: What does it mean to ask for forgiveness? What does forgiveness look like?” he adds.

Upside of Maybe filmed “Rainmaker” last November at Woodland Cultural Centre, located at the former Mohawk Institute Residential School in Brantford, Ont. The video was nominated for Music Video of the Year at the 2021 Forest City London Music Awards in London, Ont.

The song appears on Upside of Maybe’s latest release, All Who Wander. Visit upsideofmaybe.com.

Related stories:
'A monument for our resilience'
Building relationships with residential school survivors

Gerard (Abouyou) Roberts from the Indigenous worship band Okama dances in the video for “Rainmaker.”