MC Eastern Canada looks to where God is calling the church 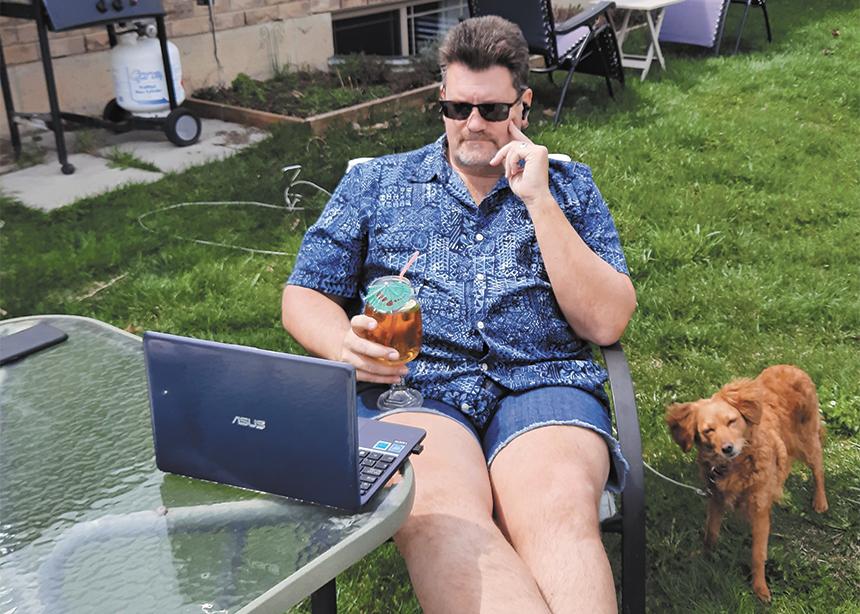 Craig Frere takes in MC Eastern Canada’s spring gathering from his backyard. This was the second year the annual event was held online due to pandemic restrictions. (Photo courtesy of Craig Frere)

How is the church like kimchi? At Mennonite Church Eastern Canada’s spring gathering, held virtually on April 23 and 24, many of the more than 250 in attendance tried making the traditional Korean dish while following Pablo Kim Sun’s demonstration from his kitchen in Toronto. Kim Sun, pastor of Toronto Mennonite New Life Church, described five ways that kimchi serves as a helpful metaphor for the church.

The spring gathering—the second to be held online due to pandemic restrictions—was based on the theme of “Courageous imagination.” Grounded in Isaiah 43:19, which is about God doing a “new thing,” it was an opportunity to give thanks for God’s faithfulness and hear from leaders about a year-long “Courageous imagination” journey. This strategic and spiritual process of exploring the regional church’s identity, while listening for God and discerning who God is calling the church to become.

According to Leah Reesor-Keller, executive minister, the “yearlong process of engagement” is a way of doing strategic planning that intentionally seeks to involve more people and “hear more voices.” Reesor-Keller and project coordinator Mollee Moua introduced the “Courageous imagination” web page, the guiding questions and an infographic to track the process. They also highlighted a new monthly podcast series that will feature people from across the regional church reflecting on how they listen for God, how they have experienced God at work, and how God is calling the church to respond and adapt to change.

The “Courageous imagination” journey began with a virtual prayer gathering in February in order to root and ground the process. Noting that “the journey itself is as important as where we end up,” Reesor-Keller said that, like a pilgrimage, this type of shared experience will “transform us along the way.”

The leaders encouraged churches to find creative ways to engage with the materials, which will be provided in a variety of languages to facilitate intercultural engagement. Youth retreats will also focus on the theme this year. Leaders hope to have new identity statements and priorities identified after a year of gathering feedback.

The kimchi-making demonstration was an opportunity to continue growing into what it means to be an intercultural church. Jinah Im, married to Kim Sun, described the history and cultural context of this versatile Korean side dish. She noted that, with its relatively inexpensive and plentiful ingredients, it is accessible and nutritious, and yet it varies a great deal, depending on geographical region. It is traditionally made communally, at the harvest, and is served in a variety of ways.

As Kim Sun measured, chopped and mixed cabbage, onion, garlic, fermented shrimp, Asian pears and seasonings, he described how kimchi is a good metaphor for the church:

Acknowledging that it “takes more effort to be in a church with more diversity,” Kim Sun said that the regional church needs to take this journey because it is “God’s vision for church and society.” He suggested five approaches to differences that are not helpful:

Encouraging individuals and churches to become more intercultural, Kim Sun offered a continuum for growth in that direction: moving from being segregated and exclusive; through passively accepting privilege; to making symbolic and then more substantive, structural changes toward becoming fully inclusive. He invited participants to discuss where their churches are at on the continuum and how they can move to the next stage.

Sean East, MC Eastern Canada’s financial manager, expressed gratitude for generous giving that continued in uncertain times. A government subsidy and reduced spending meant that the regional church ended the year with stable finances. To balance the books, it was necessary to draw on the Faithful Steward Fund that serves as a reserve fund. All financial commitments to over a dozen partner agencies and organizations, like schools, camps and service agencies, were met.

East described the spending plans for the next fiscal year as a “placeholder budget,” with no significant changes to programming, and the pandemic still a factor for several more months. It is also a time of waiting for the “Courageous imagination” process to inform where the regional church goes next, which may impact its finances.

In pre-recorded videos provided ahead of the virtual gathering, leaders shared developments in various MC Eastern Canada ministries, including how pastors were provided with resources during the pandemic, how church growth and support of international missions continued, and how churches are journeying toward becoming an intercultural church.

Several milestones were celebrated as part of the spring gathering. Famille Assemblée de la Grâce (10 years), a small congregation in Montreal that worships in Haitian Creole, has been a provisional member of the regional church since 2018.

Ma Destinée, in Montréal, formed from new believers among recent Haitian immigrants. The church of 25 people increased attendance during the pandemic, and it has an active prayer and Bible study ministry. It is led by pastoral couple Rheau Jean-Claude and Marjory Brutus.

The pastors of the new churches offered prayers.

Two churches closed this year. One was the Commons, a church in inner-city Hamilton, Ont. The other was the Network, a house church in Kitchener, Ont.

This article appears in the May 10, 2021 print issue, with the headline “‘Courageous imagination.’” Do you have a story idea about Mennonites in Eastern Canada? Send it to Janet Bauman at ec@canadianmennonite.org. 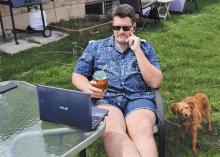 Craig Frere takes in MC Eastern Canada’s spring gathering from his backyard. This was the second year the annual event was held online due to pandemic restrictions. (Photo courtesy of Craig Frere) 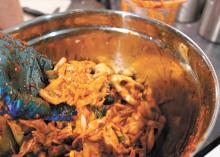 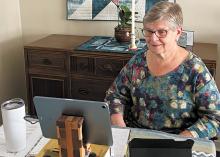 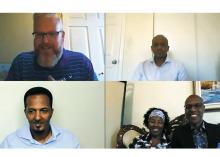 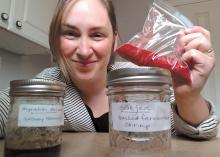 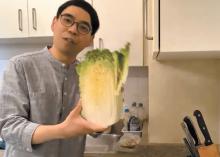 Pablo Kim Sun preps ingredients for kimchi as he explores how the traditional Korean dish is a good metaphor for the church. The cooking demonstration was part of MC Eastern Canada’s annual Spring Gathering, held virtually April 23 and 24. Participants were invited to follow Kim Sun’s cooking demonstration in their own kitchens. (Screenshot courtesy of MC Eastern Canada) 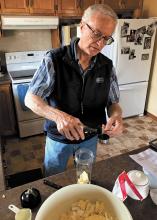