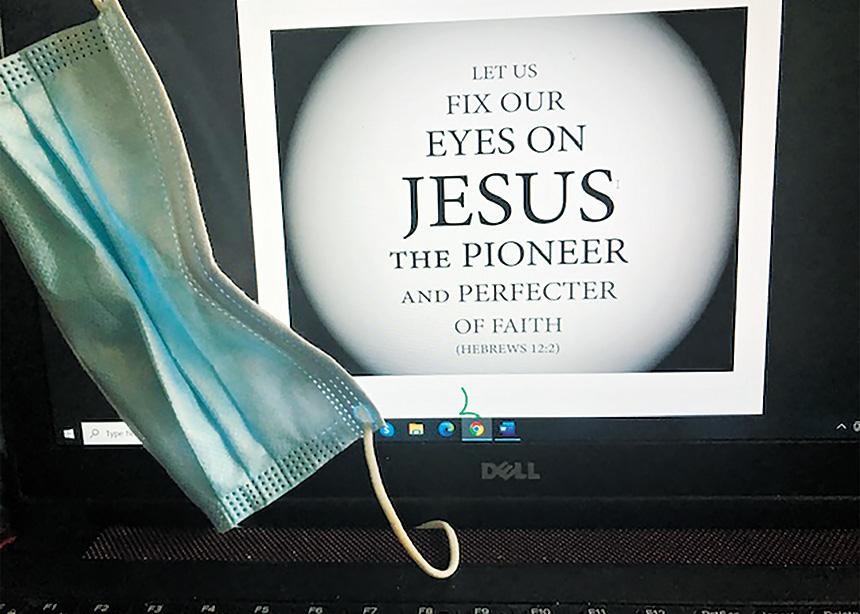 Despite the reality of COVID-19 this year, the 2021 annual general meeting of Mennonite Church B.C. took place virtually on Feb. 27 with participation exceeding that of previous years. (Photo by Amy Rinner Waddell)

Although faces on screens had to replace in-person contact, participants at the 2021 Mennonite Church B.C. annual general meeting, held on Zoom on Feb. 27, managed to create a sense of connection for participants and allowed them to transact business as in previous years.

This year, there was no inspirational LEAD conference the day before, and sessions were limited to the morning, although they did go longer than the allotted three hours.

First-year moderator Gerry Grunau greeted the 114 delegates, plus guests, with the assurance that “Your presence is valued.” This year’s biblical theme was from Hebrews 12:2: “Let us fix our eyes on Jesus, the pioneer and perfecter of faith.”

New this year were annual reports from staff and committees by video, that were available for viewing in advance, and a pictorial memorial of those regional church members who had passed away since 2020.

Generating the most discussion was the resolution to restructure MC B.C. Under the general umbrella are the key themes identified six years ago as “Cultivating Anabaptist vision, growing community and engaging God’s world,” with Jesus and the missional congregation at the centre. The new structure calls for task groups within the three core areas to carry out specific projects as ministries are imagined. When these ministries are completed, the task group could come to an end.

Conversations in MC B.C. revealed that a more appealing model for many was to work together on an area of common interest for perhaps a shorter period of time, rather than sitting on a committee and attending monthly meetings.

Cheryl Berto of Living Hope Christian Fellowship in Surrey wondered if the new format would put power into the hands of fewer people, having only one person taking over what a committee previously did. “It’s been only lately that I’ve seen what committees can accomplish,” she said. “Disbanding committees would be a tremendous loss.”

Several others questioned the open-ended terms of the task groups, specifically, how to deal with a potentially toxic member and how a group would know when it is time to dissolve.

Ken Kehler of Peace Mennonite Church in Richmond suggested that there are questions that needed to be addressed yet, saying, “There are a host of people who need to get involved as sheep and goats, not just shepherds. This needs to be explored by all of us, not just a few.” He proposed an amendment that the delegate body discuss and deliberate the proposal for another year at the congregational level and return for a vote at next year’s annual meeting.

After some discussion, delegates approved the amended motion that the organizational restructuring proposal be approved and implemented with the proviso that the Leadership Board will work out outstanding questions during the next year.

The other proposal dealt with the matter of revising a bylaw concerning the policy of the regional church holding titles to individual church properties, which has been the case since MC B.C.’s beginning in1940. Historically, the communal ownership of congregational assets, has had many beneficial results, participants were told.

However, from a legal and liability perspective, there are also disadvantages. The Leadership Board suggested that congregations that are not currently functioning as their own “society,” could register as such, giving them actual and legal oversight of their own local congregation and church building, and protecting them from third-party claims against the regional church. Congregations wishing to keep their title with MC B.C. would be able to do so. This bylaw change also passed.

After the meeting, Gerry Grunau told Canadian Mennonite: “The MC B.C. AGM worked out very well, with excellent support from MC B.C. staff. The memorial presentation recognizing MC B.C. constituents who had passed away in 2020 was a celebratory and sombre reflection on the impacts of COVID. Delegate participation exceeded previous years, and the discussions were engaging and productive. Delegates had obviously read the reports and viewed the videos in advance. All resolutions passed with more than 90 percent approvals, which was very supportive. We are excited to move forward with MC B.C. organizational restructuring opportunities.” 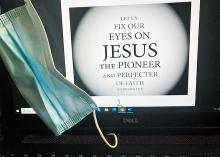 Despite the reality of COVID-19 this year, the 2021 annual general meeting of Mennonite Church B.C. took place virtually on Feb. 27 with participation exceeding that of previous years. (Photo by Amy Rinner Waddell) 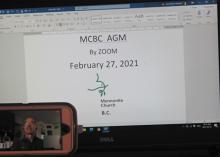