Allowing God’s light to shine ‘out of us’ 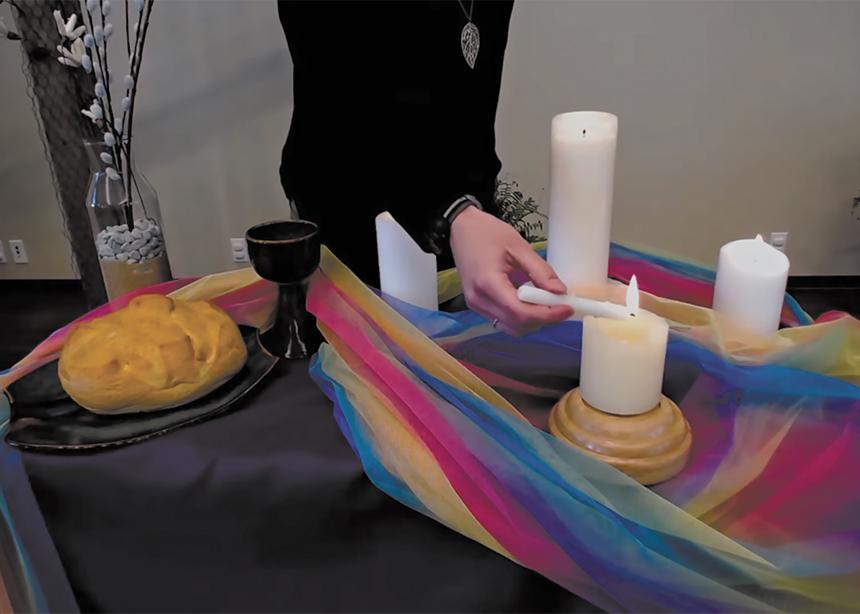 During a memorial service held as part of MC Saskatchewan’s annual delegate sessions, Kirsten Hamm-Epp lights a candle for three congregations that, in 2020, made the difficult decision to close. Superb Mennonite closed in May 2020. Hanley Mennonite and Zoar Mennonite in Waldheim will close in 2021. (Screenshot by Donna Schulz)

“We hear God’s voice from a place of knowing who we are,” said Kirsten Hamm-Epp. In her meditation that opened Mennonite Church Saskatchewan’s annual delegate sessions, the regional church minister talked about how Mary heard God’s voice and responded.

When God called Mary to be Jesus’ mother, she went to stay with her cousin Elizabeth for three months. Hamm-Epp suggested that this time was, for Mary, a kind of wilderness experience in which she discovered who she was—a woman beloved by God and a woman who loved God.

Like Mary, MC Saskatchewan has found itself in a kind of wilderness—this one created by the changing dynamics of being the church in the 21st century and exacerbated by the COVID-19 pandemic. The theme chosen for the March 13 sessions, which were held on Zoom, was “Called to hear.” Throughout the day, the 110 participants reflected on who they are and who they hear God calling them to be.

For three congregations, responding to God’s call in 2020 meant making the painful decision to close their doors. Lois Siemens offered thanks for Superb Mennonite, which held its final worship service on May 31 last year.

Both Hanley Mennonite and Zoar Mennonite in Waldheim will close in 2021.

Steve Kroeger, Hanley’s chair, acknowledged that “congregational energy was a huge factor” in their decision to close.

Liz Baerwald, who chairs Zoar Mennonite, said that a decline in membership meant her congregation’s life together was no longer sustainable.

While some grieve their church’s closure, others see God calling them to new beginnings. With support from MC Saskatchewan’s Ministries Commission, Josh and Cindy Wallace began an experiment in planting a new congregation in Saskatoon.

Josh, who is church engagement minister for MC Saskatchewan, also participated in online training through the New Leaf Design Shop and is looking forward to sharing what he learned about re-imagining church with the rest of MC Saskatchewan.

In addition to church planting, the Ministries Commission responds to God’s call through the Walking the Path Committee, which is working at identifying and protecting Indigenous sacred sites, such as the Ancient Echoes Interpretive Centre near Herschel, Sask.

Creation care is another area in which the Ministries Commission responds to God’s call. Mark Bigland-Pritchard said that 2020 witnessed the launch of For the Love of Creation, a national interfaith group created to promote faithful climate conversations. He said that one MC Saskatchewan congregation will be conducting an energy audit this year, and another is looking into installing solar panels on its church building. In addition, Jeanette Hanson is assembling a collection of stories related to creation care.

The Pastoral Leadership Commission hears and responds to God’s call as it assists congregations in hiring new pastors. It also offers several ways for pastors to connect with, and learn, from one another. Mentoring relationships pair new pastors with seasoned colleagues, and pastor peer groups provide opportunities for them to receive support and encouragement from their peers.

Kevin Koop, pastor of Carrot River Mennonite, pointed out that the budget for 2021 does not designate funds for church planting or church growth. “Rather than doing crisis planning,” he said, “could we allocate [an amount] from funds when churches close [toward church planting and growth]?”

Ryan Siemens, MC Saskatchewan’s executive minister, replied that he thought this was a good idea, but that more conversation needs to take place, and that it would be better to have this conversation in person rather than on Zoom.

Finally, several individuals answered God’s call to serve in various elected positions. In addition to those who agreed to serve a second term, delegates elected Myrna Sawatzky and Trevor Siemens to the Youth Farm Complex board, and Alison Jantz to the MC Canada Joint Council.

Those who gathered online for these sessions don’t know where 2021 will take the regional church, but Hamm-Epp reminded them of the cyclical nature of God’s call. “If we are faithful to the journey, we know that that’s where the path will lead us again,” she said, urging her audience to be “ready to participate, to spread God’s light, [and to] allow that light to shine so deeply that it shines out of us.” 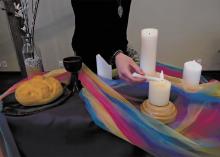 During a memorial service held as part of MC Saskatchewan’s annual delegate sessions, Kirsten Hamm-Epp lights a candle for three congregations that, in 2020, made the difficult decision to close. Superb Mennonite closed in May 2020. Hanley Mennonite and Zoar Mennonite in Waldheim will close in 2021. (Screenshot by Donna Schulz)