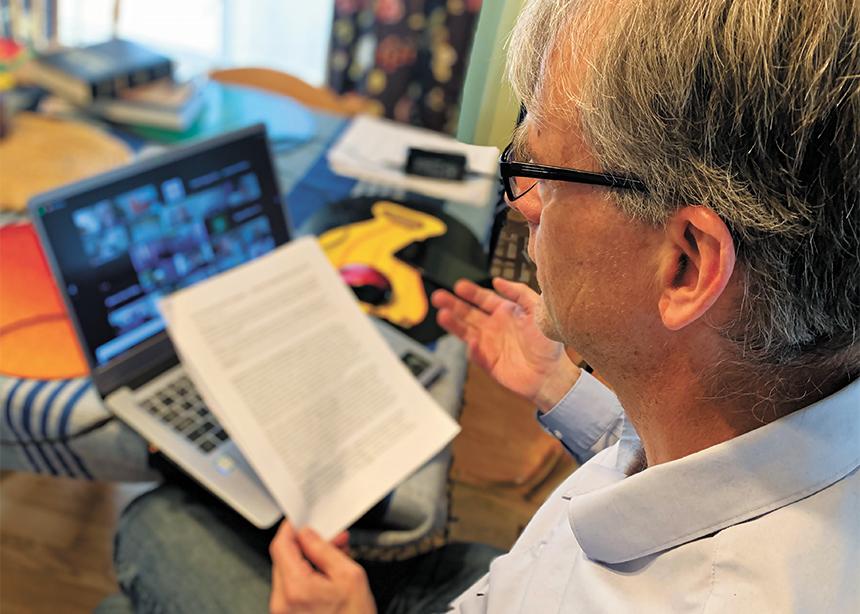 Werner De Jong was the plenary speaker at this year’s MC Alberta annual delegate sessions, held on Zoom this year. His messages focused on the theme ‘Love one another,’ as part of the regional church’s launch of its Year 2 vision: ‘Encountering, Embracing, Embodying Christ in Community.’ (Screenshot by Joanne De Jong)

Delegates heard these words of affirmation while gathered on Zoom on March 20, for this year’s annual meeting.

Instead of the expected bad news of a $34,000 deficit, good news of a $95,000 surplus was reported. Although part of the reason for this was decreased ministry expenses due to COVID-19 and increased government subsidies, MC Alberta was still able to give $18,000 to the Calgary Chin Christian Church, whose new church building needed renovations before its official opening on March 14, 2021. The regional church also gave $12,000 to Mennonite World Conference in response to its COVID-19 relief appeal.

And, according to finance chair Wayne Janz, “Support for the Witness program was strong, with donations exceeding our forecast by over 40 percent.”

Multiple fundraisers for Camp Valaqua exceeded expectations, including the Family Feud fundraiser and the annual hike-a-thon. Church giving exceeded budget projections, with some congregations giving more to cover congregations who had less to give.

Nine pre-assembly workshops were held online over a number of weekends in February and March, in place of the workshops usually held at MC Alberta’s in-person assemblies. The workshops were well attended and, as Jake Froese from Trinity Mennonite Church in DeWinton, noted, “I really appreciated the workshops. No written report accurately describes what’s happening. Workshops show the life of the conference.”

Excitement was expressed over the re-opening of Camp Valaqua this summer, even if only at 50-percent capacity. There was discussion around increasing camper registration fees, since some costs remain the same even while there are a smaller number of campers allowed.

Even completing the constitution and bylaws was given a “wow!” after hours and hours of work was poured into updating them  in response to MC Canada’s recent restructuring.

All resolutions were passed unanimously.

Delegates met Gwen and Ken Wellington, who have approached MC Alberta about church planting in Cranbrook, B.C. Cranbrook is located closer to an MC Alberta congregation than to any in B.C. Also, Gwen used to attend Springridge Mennonite Church in Pincher Creek, Alta., so they thought it could be a good fit.

According to Gwen, “We want to create an Anabaptist presence. We have a heart for people who have been hurt by the church—marginalized people.” They are looking for people to come and work with them.

In spite of a projected deficit for the next fiscal year, the delegates agreed to hire a half-time church engagement minister. According to Tiessen-Wiens, “The three priority areas in this position are: to help us think and share our faith story within our local communities; building relationships among churches, with attention to inclusion and cultural diversity; and nurturing financial sustainability and generosity.”

After lunch, the focus shifted to launching Year Two of the MC Alberta vision: “Encountering, Embracing, Embodying Christ in Community.” The Chin Church, which had led the morning worship, continued into the afternoon.

De Jong challenged the congregations to love each other deeply, using John 13:34b-35 as the theme verse. “When you love one another, you are a visible sign to the rest of the world that there is hope, that another world is possible,” he said, urging everyone to see this vison not as something thrust upon them, but as something discerned in community through the Holy Spirit. Therefore, everyone should be open and listen to what God wants to teach the church.

The following day, a joint MC Alberta worship service was held, with all 12 congregations represented. More than 350 attended.

This article appears in the April 12, 2021 print issue, with the headline “‘How blessed were we?’” Do you have a story idea about Mennonites in Alberta? Send it to Joanne De Jong at ab@canadianmennonite.org.

Related stories:
Allowing God’s light to shine ‘out of us’: MC Saskatchewan considers what it means to respond to God’s call
MC Manitoba: Annual church gathering focused on being ‘rooted in Christ, reaching out in love’
New directions for MC B.C.: Organizational restructuring approved at virtual annual meeting 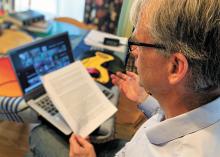 Werner De Jong was the plenary speaker at this year’s MC Alberta annual delegate sessions, held on Zoom this year. His messages focused on the theme ‘Love one another,’ as part of the regional church’s launch of its Year 2 vision: ‘Encountering, Embracing, Embodying Christ in Community.’ (Screenshot by Joanne De Jong)