‘We are one body’ 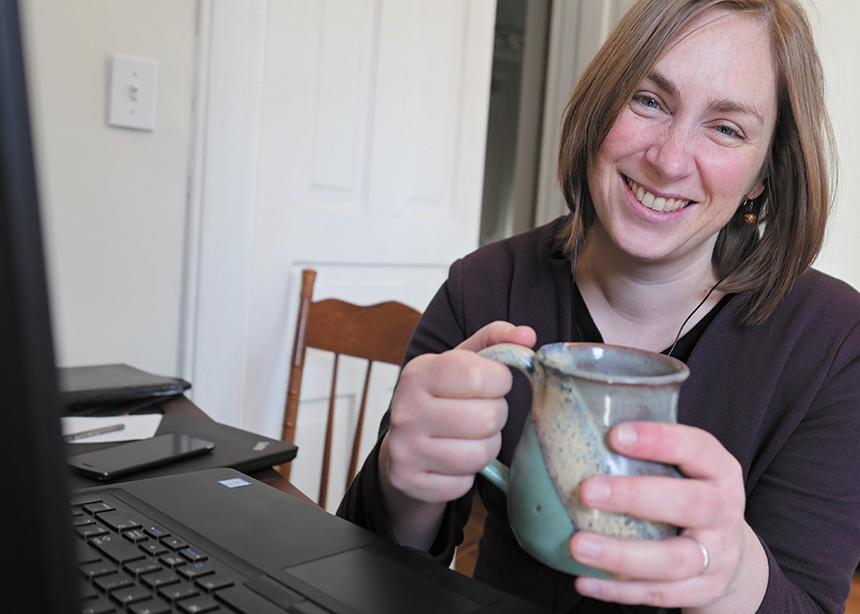 Leah Reesor-Keller, the incoming MC Eastern Canada executive minister, is pictured at her computer while participating in the regional church’s annual gathering, this year via Zoom. (Photo by Luke Reesor-Keller)

“We are one body in Christ . . . even when scattered. We are members of one another. We can still encourage and pray for and learn from each other.”

With these affirming words, Arli Klassen, Mennonite Church Eastern Canada’s moderator, drew on the theme of unity in Romans 12:5 to welcome more than 160 participants to a shortened and simplified annual church gathering, held online on April 25 because of the COVID-19 pandemic.

In her written welcome to the gathering, she wrote, “We remind ourselves that we are and remain the church, whether we are gathered or scattered. We in [the regional church] together are part of the Body of Christ, scattered over cities, neighbourhoods and streets, like salt and yeast, which do their best work when they are scattered.”

David Martin, who will retire from the role of executive minister after serving the regional church for 15 years, said he is impressed at how churches, pastors and regional church staff have adapted to the physical distancing realities of the COVID-19 era, and have found creative ways to be the church. He also shared his assurance that “God is present and walks with us right in the neighbourhood.”

Participants in the virtual gathering met in smaller break-out groups to share how their churches are adapting worship and staying connected.

Great is your faithfulness: milestones and transitions

A number of church anniversaries and staff transitions were named, as well as the mix of hope and sadness as several new churches joined and others withdrew membership in MC Eastern Canada.

Welcomed into provisional membership were:

A litany of release and words of mutual blessing acknowledging God’s faithfulness were shared for the following Ontario churches that withdrew their membership from MC Eastern Canada:

Four people from the churches withdrawing membership were present to share in the litany.

‘Courageous imagination’ needed for the future

Plans for the future of MC Eastern Canada were shared. Financial manager Sean East noted that giving from congregations declined again this past year. The deficit was covered by drawing on a reserve fund. Going forward, East recognized that all congregations are “feeling the pinch of COVID,” and he said that budgeting in the new, unpredictable reality is like “hitting a moving target.”

Delegates approved a spending plan for the next year, with a projected deficit to be covered by reserve funds.

Reference was made to several video reports reflecting ministry highlights from the past year in the areas of mission, leadership, youth ministry and international witness.

Arli Klassen highlighted a recommendation from the Youth Dream Team, which has worked at discernment for two years developing a Legacy Initiatives Fund proposal to hire a full-time youth minister.

Reesor-Keller closed the gathering by referencing the hope she finds in Isaiah 43:19. She called on MC Eastern Canada to “trust that God is doing a new thing. . . making a way forward.” She said, “Courageous imagination is a holy practice we need” in order to “dream and imagine new ways of being.”

Regional church leaders hope for an in-person gathering on Nov. 14 to bless and honour Martin in his retirement, and to focus on some broader agenda issues that came out of the listening process done by the search committee tasked with hiring the new executive minister.

Related stories:
Deepening their walk with each other in spite of social isolation
Mennonite Church Alberta holds virtual AGM
Looking forward during a time of transition
MC B.C. explores ‘connections’ 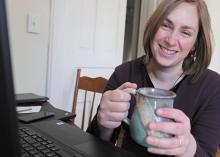 Leah Reesor-Keller, the incoming MC Eastern Canada executive minister, is pictured at her computer while participating in the regional church’s annual gathering, this year via Zoom. (Photo by Luke Reesor-Keller) 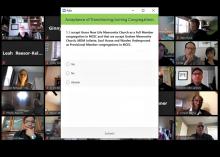 Delegates to the MC Eastern Canada annual gathering voted electronically on motions presented as poll questions in the meeting held on April 25, through Zoom, a videoconferencing application. After the voting was completed, results were immediately available onscreen. (Photo by Virginia A. Hostetler)