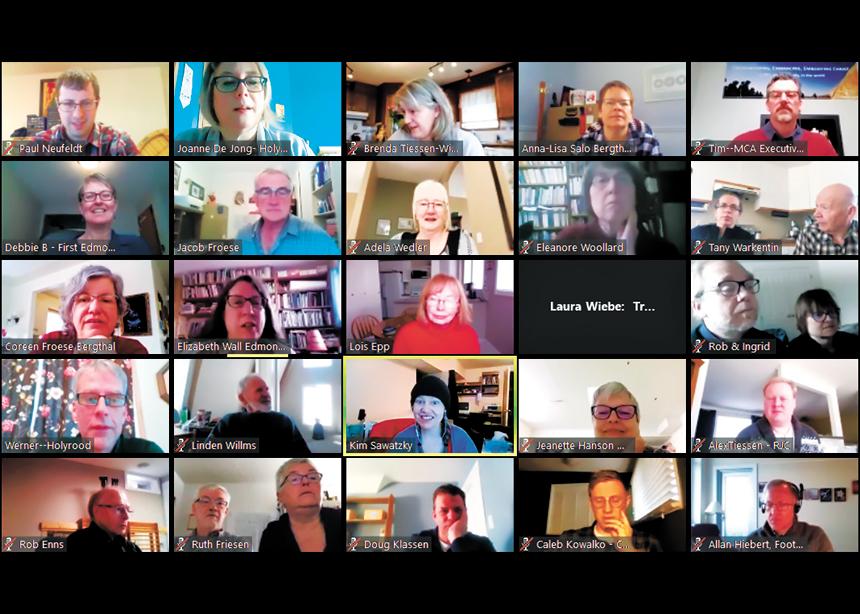 With COVID-19 limiting the ability to connect in person, virtual meetings now seem to be the wave of the future. Mennonite Church Alberta had already been using the Zoom platform to hold small provincial committee meetings online, but when its annual general meeting (AGM) was cancelled, the regional church decided to explore whether a larger meeting with Zoom could work as well.

MC Alberta planned to have its AGM from March 20 to 22 at Edmonton First Mennonite Church, but due to government meeting restrictions changing daily and fear of the virus spreading, the meeting was cancelled. A new two-hour online AGM was held on March 28.

Brenda Tiessen-Wiens, MC Alberta’s moderator, expressed sadness about not being able to meet together in person but added, “We realized it could be months before being able to meet as a conference, and some decisions had to be made.”

Although some would have been intimidated, June Miller, MC Alberta’s communications coordinator, is quoted as saying that, despite the workload, “doing something new and making something work is thrilling!”

Because the turnaround time was so short, it was a minor miracle that everything came together. Staff had to connect with all the delegates, to see if they were still interested in participating; make sure everyone had instructions; update the website; and put together a new meeting agenda, deciding what to include and not to include with the shortened time frame. Then there was all the work to set up Zoom for up to 100 people, which needed to include how to vote on resolutions, show PowerPoint slides, and answer questions one by one.

To make sure everything would run as smoothly as possible, Miller said they “practised over and over.” This included practising with the Executive and a pre-AGM invitation to any participant who wasn’t comfortable with Zoom and wanted to try it out before the actual meeting. Miller was surprised at how many people were already comfortable with the platform.

At 10 a.m., delegates and guests were invited to sign in to a virtual waiting room, where they were registered one by one and given access to the meeting. This allowed the MC Alberta Executive to track who had actually attended. Unfortunately, though, it didn’t work, but no one knew the difference. Soon there was a screen of familiar faces sharing coronavirus jokes and the story of a cinnamon bun recipe being passed from family to family.

Seventy-five people took part in the Zoom AGM, including 61 delegates.

‘Welcome to my kitchen’

With these words from Tiessen-Wiens, the 91st MC Alberta assembly officially began. “And thank you for allowing me into yours,” she added.

Greetings and encouragement were expressed from many nationwide leaders, including MC Canada executive minister Doug Klassen.

Miller showed a “year in review” PowerPoint presentation, and Jeanette Hanson spoke about the new Witness model and encouraged churches to identify what inspires them about international ministry.

Concerns about the impact of COVID-19 were expressed, as well as apprehensions over what will need to be cut in the future.

The meeting ended with a scaled down kick-off of the new MC Alberta vision: “Encountering, embracing, embodying Christ in life, in community, in the world.” Each church is being given a practical list of suggestions to inspire them to apply the new vision.

“I am excited about our three-year plan,” said Tiessen-Wiens. “Each church is picking up something and going in a common direction. We are not cookie-cutter, but community.”

MC Alberta is still hoping to schedule another celebration event later in the year, so people can enjoy being together in person.

“We are entering a big year of faith and learning what it really means to be community,” she said.

This article appears in the April 13, 2020 print issue, with the headline “Joining the wave.” Do you have a story idea about Mennonites in Alberta? Send it to Joanne De Jong at ab@canadianmennonite.org. 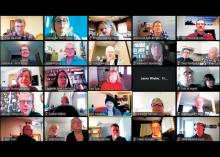