Looking forward during a time of transition

MC Manitoba focuses on next steps at annual gathering 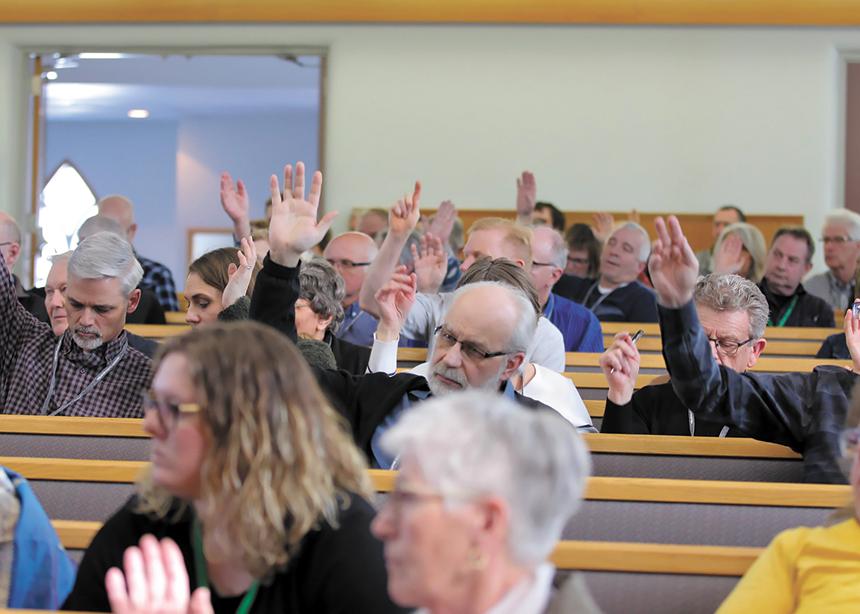 The minutes, board actions, nominations slate and budget at this year’s MC Manitoba annual gathering were all approved. (Photo by Darryl Neustaedter Barg)

“Where are we headed? What are the challenges we are facing?” At the 2020 Mennonite Church Manitoba annual gathering, the regional church focused on these big questions it is addressing in the coming year.

More than 170 attendees, including the highest delegate count in seven years, took part in the gathering at Altona Bergthaler Mennonite Church on March 7. It was a day filled with fresh cinnamon buns, worship, discussion and reporting on how the church is moving and working.

MC Manitoba congregations are entering a time of transition. This was reflected in the three mid-day discussions delegates could choose from: the new executive minister search, the strategic plan for Camps with Meaning, and communications within the regional church.

Ken Warkentin, executive minister for the past nine years, has resigned and will complete his term in June. Following his desire to once again work in pastoral ministry, he will be starting as intentional transitional pastor of Jubilee Mennonite Church in Winnipeg in August. Warkentin shared about his time as executive minister and the issues the church has faced while he was in the position, ultimately expressing deep gratitude for the staff and churches. “You are a beautiful body, and in you I see Jesus Christ,” he said. A search committee is working to find a leader to fill his position.

Camps with Meaning’s vision for the future includes developing Camp Assiniboia and launching a capital campaign to raise funds. Some of those plans include completing construction of the lake, building a retreat centre and new pool, relocating the ropes course, creating a gap-year program and hiring more staff to manage increased capacity.

Communication within MC Manitoba is evolving as it says goodbye to Frohe Botschaft, its weekly German-language radio broadcast, which started airing in 1956. The regional church has decided to end the ministry, produced and hosted by Dorothea Kampen, due to a decline in the number of listeners. Staff are brainstorming what could replace Frohe Botschaft, such as a podcast.

The regional church also communicates through a weekly newsletter and a new website. Andrea De Avila of Sargent Avenue Mennonite Church in Winnipeg suggested that MC Manitoba further explore the world of social media in an effort to connect more with younger people.

The 2020 budget, which was approved by a vote at the gathering, is virtually the same as the 2019 budget. However, the financial report shows that the 2019 fiscal year ended with about a $20,000 deficit. Moderator Gerald Gerbrandt wrote in the report book that balancing the books must be made a priority this year. MC Manitoba “is not first of all about money, but . . . as any organization with staff, it must balance its books in order to thrive,” he wrote.

Congregational giving was actually higher than anticipated, for which Warkentin said he was grateful. The shortfall came rather from individual and corporate donations.

Board member Richard Klassen explained how the board had to create the budget virtually in the dark, with no financial statements to go on for quite some time, which caused significant frustration.

This was caused in part because MC Manitoba has been changing the way it presents its financial statements for the past two years, in order to better align with how MC Eastern Canada and MC Canada present their statements, as part of an overall harmonizing of reporting standards across the regional churches and nationwide church.

A task force will examine how the situation can be improved in the future.

A question asked by Dorothy Fontaine, the regional church’s director of mission, prompted the most animated discussion of the day among delegates: “What is your church’s charism [identity, core gift]?” Coming up to the microphones, delegates shared the strengths they appreciate about their churches: excellent music, a thriving young adult group, a pastor who is a good teacher, social justice work and rich fellowship.

Many expressed their appreciation for this time of sharing and a desire to continue communicating these reflections. One way this happens is through Canadian Mennonite, which was also the focus of a key question of the day: “How will we pay for the magazine?”

A few big topics remained unaddressed at the end of the day and were brought forward in a question period.

Erwin Warkentin of Bethel Mennonite Church in Winnipeg, noted that the three-year moratorium on conversations of LGBTQ+ inclusion in the church ends this year. He asked whether there would be a plan for what happens next, once the ban is lifted, as none was mentioned at the gathering.

Ken Froese of Pembina Mennonite Fellowship expressed disappointment that relationships with Indigenous peoples were hardly mentioned, since the report on the subject was not presented. He said Manitobans often leave the actual building of relationships to a few select people, but everyone needs to be involved in these conversations.

The day of discussion and fellowship ended with communion, reminding participants that, as the regional church looks ahead into the coming year, it looks ahead together, united as the body of Christ. 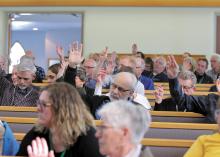 The minutes, board actions, nominations slate and budget at this year’s MC Manitoba annual gathering were all approved. (Photo by Darryl Neustaedter Barg) 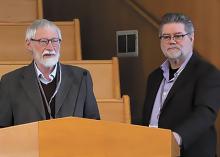 Gerald Gerbrandt, MC Manitoba moderator, left, and Ken Warkentin are pictured at the regional 2020 annual gathering. Warkentin will be leaving his role as executive minister after nine years in the position. (Photo by Darryl Neustaedter Barg)

Ervin Warkentin ‘s question regarding the three year moratorium on LGBTQ conversation was legitimate. That statement appears to have been given in insincerity meant to deflect or dampen any opposition conversation . Had MC Mb leadership wanted to include this question in this years planning meeting in Altona they could have. Remember the statement ended with “we will then see which way the Spirit will nudge us”. Given the chaos created within the Canadian General Conference churches since the 2016 annual meeting decision to, allow for “alternative” marriage, do you require more evidence?
I believe that Jesus asks for sexual moral obedience and assists and gives strength to overcome. But sexual desires can and do ensnare us , heterosexual as well as homosexual.