Deepening their walk with each other in spite of social isolation 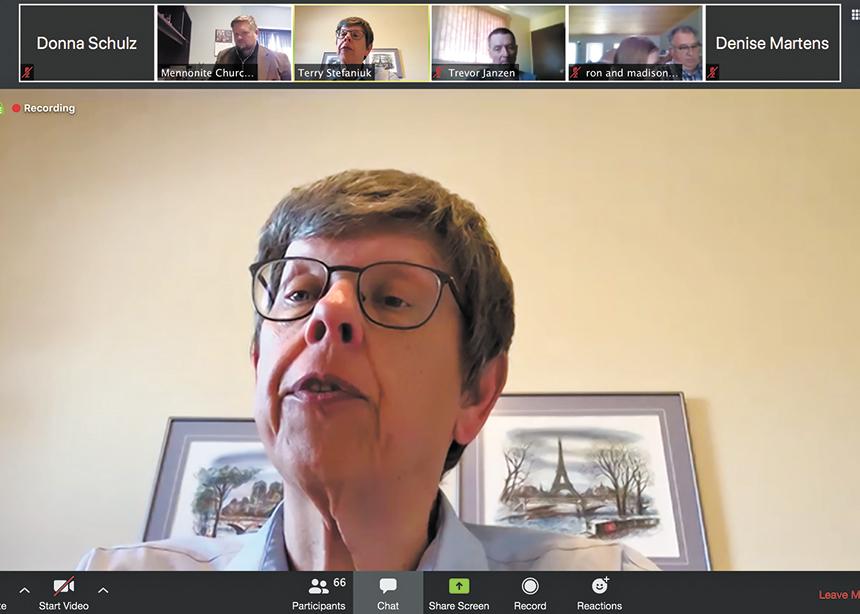 After a year spent exploring the theme, “Deepening our walk with each other,” Mennonite Church Saskatchewan continued, inadvertently, to ponder what this means during its annual delegate sessions (ADS).

When COVID-19 forced the postponement of the regional church’s annual general meeting, slated for mid-March, planners scheduled a virtual meeting, via Zoom, for April 25.

Seventy-eight delegates and guests met online to hear reports, approve a new slate of nominees and vote on a new budget for the coming year. Changes to the regional church’s bylaws, introduced at the 2019 delegate sessions, were also approved.

After moderator Terry Stefaniuk adjourned the business session, Ryan Siemens, MC Saskatchewan’s executive minister, invited representatives from each church to share, in three minutes, how their congregations have been impacted by, and have adapted to, social isolation.

While all congregations miss Sunday morning worship together, most have turned to computer technology to enable them to meet and be spiritually nurtured in a different way.

Many people expressed gratitude for the worship services offered through MC Canada. A number of congregations, including Eigenheim and Osler Mennonite, prepare their own pre-recorded services every two weeks and encourage congregants to tune in to the MC Canada services on alternate weeks.

Some smaller congregations, such as Eyebrow and Pleasant Point, meet for worship via Zoom. Others, like Langham and Aberdeen, use Zoom for mid-week coffee and visiting times. Both Rachel Wallace of Eigenheim and Claire Ewert Fisher of Rosthern Mennonite offer faith exploration classes for their youth via Zoom.

While the video-conferencing app works well for those with computers, pastors have to use other means to communicate with those without access to technology.

“How do you connect with people who don’t connect electronically?” wondered Bruce Jantzen, pastor of Laird Mennonite. He admitted that some in his congregation are afraid of technology.

And they’re not alone. Lisa Martens Bartel, a lay leader of North Star Mennonite in Drake, said there is a real divide in her congregation, with those over 40 saying they feel intimidated by Zoom, while those under 40 use the technology comfortably.

Rod Suderman of Saskatoon’s First Mennonite, Andrea Enns-Gooding of Zoar Mennonite in Waldheim, and Ed Olfert of Grace Mennonite in Prince Albert all said they print their sermons and either deliver or mail them to congregants who don’t have computers.

On the other hand, many expressed gratitude for the technology that allows members to stay connected with one another. Trevor Janzen, co-chair of Tiefengrund Mennonite, near Laird, said that technology is enabling his congregation to “keep in touch with distant members better than we ever have.”

A number of people shared about special Easter services. Carrot River Mennonite joined with the Catholic and United churches in their community to host a Stations of the Cross service via Zoom on Good Friday. And Aberdeen Mennonite held a drive-in Easter Sunday service in the community arena parking lot.

Most people said they are staying connected with one another by phone.

“We’ve discovered that our smart phones are really phones,” said Garth Ewert Fisher, pastor of Mount Royal Mennonite in Saskatoon. He added that families are “stepping up” and using their phones to keep in touch with each other.

A number of pastors spoke about how difficult it is to have a death in the church at this time. Suderman said he has conducted a number of graveside services. The Ewert Fishers conducted a funeral service at Mount Royal Mennonite that streamed online. Garth said that only five family members were present in the sanctuary with the pastors, but that “149 terminals were tuned in online.”

Participants expressed both compassion and humour as they talked about dealing with social isolation. Lorraine Bentham of Pleasant Point Mennonite said the pandemic is giving her congregation “understanding of what it’s like to live in isolation,” adding, “It gives us empathy for our seniors.”

“We are coping” seemed to be a common thread for many, but Emily Summach, pastor of Langham Mennonite, wondered about the sustainability of these new coping strategies, saying, “The appeal of connecting electronically is waning.”

Scheduling congregational sharing ahead of reports from organizations was intentional. “First and foremost, MC Saskatchewan is the churches [that comprise it],” said Siemens. “And it was good for the organizations to hear what our churches are going through—it’s easy to think our own struggles are the only struggles—and for us to hear from the organizations and get a broad scope of work we’re doing.”

“This was the first ADS where we heard from all congregations represented,” he said. It seemed important to do, he said, since “last year’s business is pretty much irrelevant. We have more pressing things on our minds.”

In a parting comment, Sharon Schultz, pastor of Eyebrow Mennonite, said, “God is surely moving among us. I am so glad to be a part of MC Saskatchewan.” 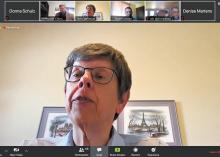 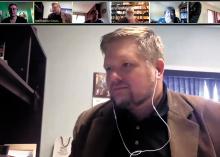