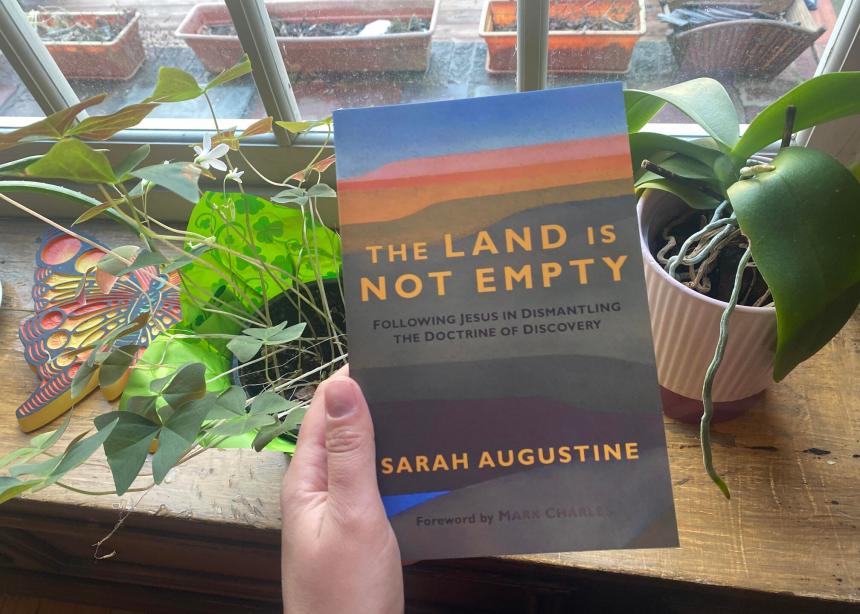 Since this is the Spring Books and Resources issue of Canadian Mennonite, let me recommend a book that speaks directly to some of the headline news of the past few weeks. No, it’s not something on Ukraine. It’s a book on mission.

A monster challenge is how institutions respond to issues of social injustice and oppression in which an institution is deeply involved. Churches in North America and elsewhere have been heavily, and rightfully, criticized for their roles in colonialism. Indigenous-settler relations in Canada took an interesting turn earlier this month with an apology from the Vatican for the “deplorable abuses” at residential schools.

I hope that we are past the time when Mennonites feel they didn’t have a part in, and do not benefit from, those injustices. In The Land is Not Empty, author Sarah Augustine—committed both to her Christian faith and her Indigenous heritage—challenges Christians of all denominations to “dismantle” the 500-year-old Doctrine of Discovery that forms a crucial legal and cultural foundation in settler-colonial countries.

As Augustine explains, “The Doctrine of Discovery is a theological, philosophical and legal framework dating to the 15th century that gave Christian governments moral and legal rights to invade and seize Indigenous lands and dominate Indigenous Peoples.” (Ever wonder why so much of Canada is called “Crown land”?)

Laws and social norms gave flesh to the doctrine. Territory newly “discovered” was now available for morally “good” uses of “empty land”; that is, for settlement and resource extraction. While it is usually discussed in the past tense, it is not a relic of history.

Augustine argues forcefully that the Doctrine benefits each one of us. She challenges herself, too, even describing her own family’s efforts to eliminate involvement in a system that she sees as deeply exploitative. We are all part of, and have our money in, systems that profit at the expense of marginalized peoples.

For example, Canada’s laws allow Canadian mining companies to follow weaker rules on human rights and environmental protection outside of the country. Augustine’s solutions to “dismantling” are not only about changing some laws or issuing an apology. Dismantling the doctrine follows Jesus, such as in the parable of the rich man who asked what more he should do, and was told to “sell all you have and [really] follow me.”

Near the end of the book, Augustine asks what would it look like for Indigenous Peoples to send missions to mainstream Canadian society, to Wall Street, and to fossil-fuel and mining companies. Drawing on Indigenous cosmologies present in her own Tewa culture, and among the people of Suriname, where she did environmental-health work, she describes the mission as one about restoration of creation, renewed focus on relationships, reduction of corporate capitalism, less individualism and more community. Sound like shalom?

A core scriptural basis of the Doctrine of Discovery is the Israelite conquest of Canaan after the escape from Egypt. An alternative form of the Christian message is about a Jesus who taught and lived for liberation for the oppressed in the here and now. The struggle is to repudiate the first form of Christian mission and internalize the latter. That must go beyond symbolic forms of solidarity. May God help us to humbly, but deliberately, challenge each other as Jesus-followers and churches to put money and lives in line with beliefs and talk.

Randolph Haluza-DeLay lives in Toronto, on the land of the Haudeno-saunee, Anishinabeg, Wendat, and Mississaugas of the Credit First Nation.

Read more Mind and Soul columns:
A culture of peace
CPT changed its name
On evangelization
It’s about flourishing
Reading is (mostly) good 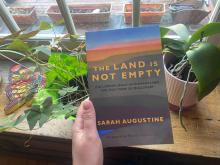 Thank you for the article.

I agree with the statement that we all benefit from colonialism on some level (material) and we lose on the level of community, union, connection with fellow humans and common values.

The restriction I still see in the argumentation is the tendency to rely heavily on religious ideas and desire to wash off the negative history by bringing in positive ideas related to the religion.

I find it more beneficial when we decide to put aside an idea to justify religion, and focus on understanding of needs of Indigenous people and most importantly what prevents us from actualizing the changes that are needed.

What is the biggest obstacle? How to resolve it?

I think we need to put religion aside, otherwise we will keep repeating the same mistake. It is not the ideology or set of ideas that is important (however sacred we might consider them to be), but human life, the prosperity and joy.

Being human unites us all. And facing crucial questions is what may really bring any change.

Bonjour Randy, I had to reread your article at least twice in order to have a sensible comment. At each reading, I changed my perspective on this most complex issue. Yes, we all benefit from colonialism. I inherited land from my father who homesteaded in Alberta. That's just one example. I'm sure anyone can come up with other valid examples of becoming rich under the banner of colonialism. To remediate this 500 year abuse is quite a problem. Where do you start? I have no idea. Let me know when you find even a part of the solution. As a final comment: Some NGOs address the root causes of poverty, but maybe it's time to address the root causes of the accumulation of wealth.